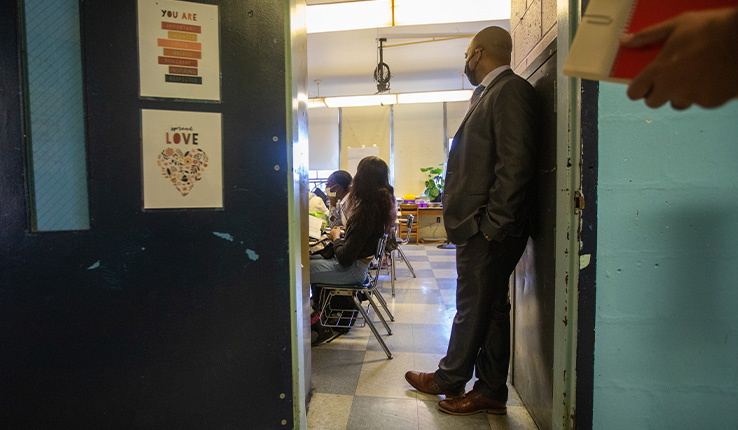 The first edition of School Leadership in a Diverse Society: Helping Schools Prepare all Students for Success has been updated, taking into account how much society has changed since 2014.

Floyd Beachum, along with two co-authors, updated a previous version of his book for school administrators and teacher leaders.

In 2014, Floyd Beachum published the first edition of his book, School Leadership in a Diverse Society: Helping Schools Prepare all Students for Success, to help school leaders better serve increasingly diverse schools. Since then, a number of events, including the COVID-19 pandemic and the murder of George Floyd, have changed the landscape for educational leaders in many ways.

In response to this rapid change, Beachum, the Bennett Professor of Urban School Leadership, and co-authors Carlos McCray of Montclair State University and Phyllis Reggio of Hunter College have published a second edition, which shares the same title as the original.

In the first edition, Beachum says, he and McCray provided information and guidance to school administrators, teacher leaders and those interested in educational leadership, specifically with regard to increasing diversity in society and within schools. The second edition has the same focus, but also takes into account how much society has changed since 2014 and the additional challenges leaders now face. The book discusses a number of current events and how they relate to today’s educational administrators, as well as the roles they play in schools.

Beachum’s goal is to prepare school leaders not necessarily for specific instances or world events, but to provide them with a “mindset, perspective and worldview so when these kinds of things happen, they’re more prepared.”

He acknowledges, however, that leaders today face problems for which it’s very difficult to prepare.

“Some of the literature has been pretty clear that we're trying to prepare folks for problems that we've never even witnessed before,” he says.

This challenge is compounded , Beachum says, by the work of preparing students for careers that may not even exist yet. Educators need students to think as broadly as possible, he says.

Early in the book, the authors discuss culturally relevant leadership and critical race theory. Beachum says critical race theory could have been critiqued when it emerged 40 years ago, but it became a hot-button political issue while he and his colleagues were writing. To help readers understand the current debate, Beachum says, the opening chapter focuses on racism, defining it and dissecting it on a number of levels: individual, institutional and cultural.

“We define [critical race theory], we give examples of it and talk about its application to educational leadership,” Beachum says. “Most of us understand that [the reaction] is all politics, so we're very clear about the true purpose of CRT versus how it has been distorted.”

He cites an example regarding discipline policies in K-12 schools. There is nothing racial about them, he says, but if students of color and boys are the majority of those suspended and expelled, there’s an issue.

“It's like, okay, well, wait a minute,” Beachum says. “If the policy is the same and not racial, the application is the problem then. So what is it in us as teachers and school leaders that have us implicitly targeting these students?”

The second edition also focuses more on inclusion and what it means for school leadership, along with a brief history of special education and its importance for school leaders. Overall, Beachum says, he’d like readers to understand that diversity is important to recognize and embrace.

“One, it's going to happen,” Beachum says of schools becoming more diverse. “Two, we need to be prepared for it, especially our school leaders. No matter what the noise is saying around us, we're just going to have to deal with the reality of the demographic changes in schools. Communities are going to change and our schools are going to change. It's inevitable, [and] it's happening right now.”