Do Democracies Behave Differently From Non-Democracies When it Comes to Foreign Policy?

In a new paper, Lehigh University’s Arman Grigoryan contributes to the debate between two intellectual traditions―liberalism and realism―over whether supporting and spreading democracy is an important priority for democratic states. 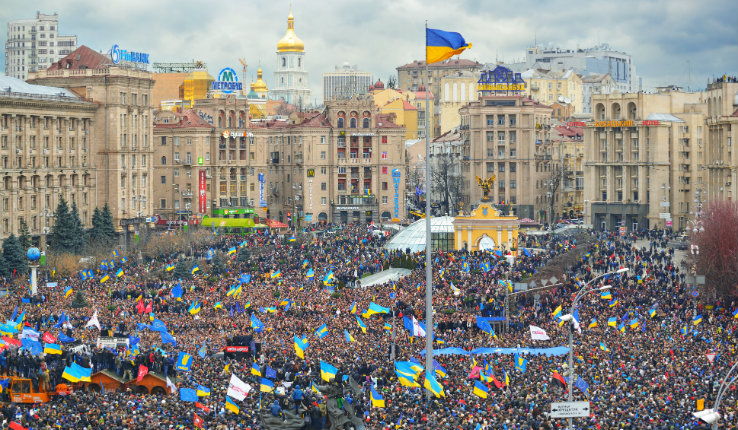 A mass movement in Kiev, Ukraine on Dec. 1, 2013. This movement in 2013-2014 was one of two events that served as triggers for Arman Grigoryan's decision to write his new paper.

The question of whether democracies behave differently from non-democracies is a central, and intense, debate in the field of international relations. Two intellectual traditions—liberalism and realism—dominate. Liberals argue that democracies do indeed behave differently, while realists insist that regime type and ideology are of little relevance in understanding foreign policy behavior.

Arman Grigoryan, a faculty member in the Department of International Relations at Lehigh University has contributed to this debate with a recent article in a top journal, International Security. Grigoryan has focused on a particularly controversial subtopic of this debate, which is whether supporting and spreading democracy is an important priority for democratic states. His answer to that question: No.

Two events have served as triggers for Grigoryan’s decision to write the paper. The first was the democratic mass movement in his native Armenia in 2007-2008, or more accurately, the posture the West adopted toward that movement, which Grigoryan describes as one “between indifference and hostility.” The other event was a mass movement in another post-Soviet state—the one in Ukraine in 2013-2014—which the West quickly mobilized to support. Grigoryan found the liberal arguments about the motives for supporting the Ukrainian movement, which were all about supporting a force for democracy, suspect, given what he had observed in Armenia.

“What made the desire to examine this puzzle even more urgent were the realist criticisms of the policy as driven by ‘liberal delusions,’” says Grigoryan. “Realism is the theory which has traditionally dismissed claims about the causal relevance of states’ regime types and ideological commitments. Yet now even realists were arguing that the policy was driven by ideology, even if they were criticizing it as wrong-headed. But was it ideology?”

A systematic comparison of the West’s reactions to the movements in Ukraine and Armenia provided an opportunity to answer that question. The two cases were very similar on most dimensions, yet the outcomes could not have been more different. Grigoryan wondered, if ideology drove the policy in Ukraine, why did it not do the same in Armenia?

Grigoryan focuses on another motive of the West’s behavior to answer the question: the rollback of Russian influence in the post-Soviet space.

“In Armenia these two motives pushed in opposite directions, because the Armenian mass movement did not have an anti-Russian or any other kind of geopolitical coloring,” says Grigoryan. “The lack of Western solidarity with the Armenian movement, therefore, was much more informative.”

Grigoryan anticipates an important skeptical question in the article: could the finding from the comparative analysis of the West’s reactions to the mass movements in Ukraine and Armenia be nothing more than a strange anomaly, a deviation from an otherwise strict pattern? He dedicates a part of the paper to the examination of the West’s overall record in order to answer that question.

He argues that what happened in Ukraine and Armenia is very much in line with the overall pattern.

“Democracy has been supported when such support has dovetailed with certain material interests—geopolitical, economic, or corporate—and never when such interests have diverged from the liberal preference for democracy,” says Grigoryan.