A chemist rates "exceptional" in immunotherapy 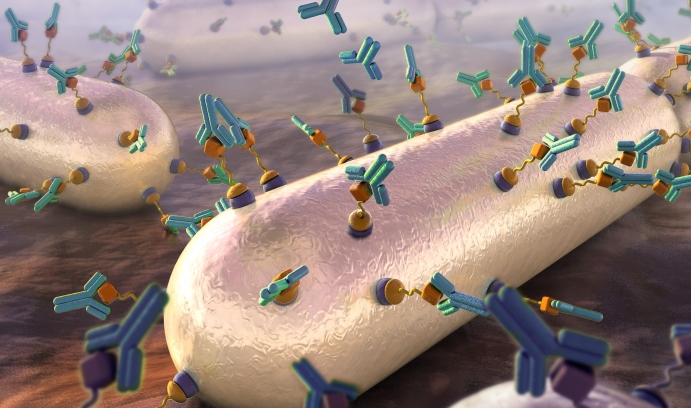 An artist’s rendering (from the cover of the April issue of the journal ACS Infectious Diseases) shows the recruitment of antibodies to target cells (bacteria) through surface modification techniques that introduce antigen links to the cells’ surfaces. (Illustration by Nicolle Fuller)

About 23,000 people in the United States die each year of bacterial infections that are resistant to antibiotics, according to the Centers for Disease Control and Prevention (CDC). Globally, according to a review commissioned by the government of the United Kingdom, such infections take 700,000 lives per year.

If no action is taken, experts say that by 2050 the number of people who die of bacterial infections worldwide will increase by 10 million per year—more than currently die from cancer. These startling figures demonstrate why the development of alternative approaches to fighting bacteria has become a worldwide research priority.

Marcos Pires, assistant professor of chemistry, is exploring one promising route: instead of a treatment that attacks the bacteria directly, he is working on a method that would allow the immune system to do the dirty work. This novel technique takes a page out of the cancer treatment playbook, as immunotherapy is widely seen as among the most promising of emerging anti-cancer strategies.

Pires’ research has attracted the attention of the American Chemical Society, which recently recognized him with its inaugural ACS Infectious Diseases Young Investigator’s Award. The award acknowledges “outstanding early career researchers” based on significant contributions they have made to the infectious disease field. The recipients were honored at a symposium August 23 in Philadelphia during the ACS Fall National Meeting.

Pires revealed his innovative method of molecularly tagging pathogenic bacteria to attract antibodies in an article in ACS Chemical Biology in 2014.  In it, he and his team demonstrated the initial steps toward a novel, synthetic immunological approach for remodeling the surface of Gram positive bacteria by exploiting its inherent “promiscuity”—its tendency to incorporate extracellular D-amino acids into its peptidoglycan, the mesh-like scaffold that comprises much of the bacterial cell wall.

“Our method hijacks the peptidoglycan biosynthetic machinery to install a reactive chemical ‘handle’ that gets incorporated into the cell wall yielding a cell surface that recruits antibodies,” says Pires. “Essentially, this tags the bacterial cell surface with a bull’s eye marking it for destruction by the immune system.”

Pires and his team are now fine-tuning their strategy. In a cover article published in April by ACS Infectious Diseases, they revealed a two-step dipeptide peptidoglycan remodeling strategy aimed at introducing haptens (small molecules that, when combined with a larger carrier such as a protein, can elicit the production of antibodies that bind specifically to it) at an alternative site within the stem peptide to improve retention and produce higher levels of antibody recruitment to bacteria cell surfaces.

“Based on our strategy, we believe it should be possible to use synthetic dipeptides displaying chemical ‘handles’ to label bacteria cell surfaces for imaging and therapeutic applications,” says Pires. “More importantly, we propose that our method could provide the basis for improved immunomodulation strategies to combat bacterial infections.”

The team will next use its unique strategy to attack the “Big Bad” of bacterial infections—the Gram negatives.

They are also exploring whether this strategy can work in live animal infection models and, for diagnostic purposes, whether they can quickly identify bacteria based on their labeling with synthetic D-amino acids. 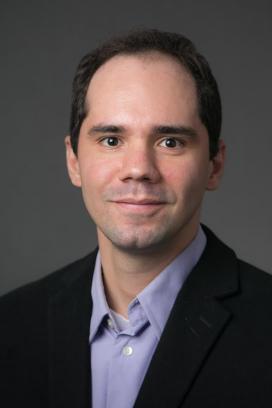 Pires, an assistant professor of chemistry, is one of three recipients of the inaugural ACS Infectious Diseases Young Investigator Award for “exceptional researchers.” 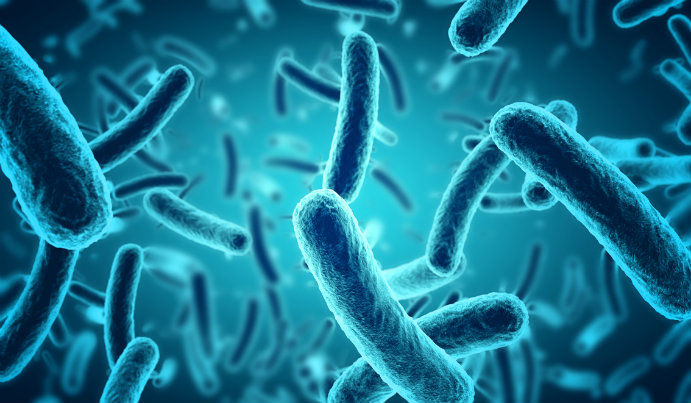