A letter from Tim Hyland, editor

When we consider the relationship between universities and the students they educate, we often think in terms of how the university will change the student for the better. For completely understandable reasons, that is the story we hear so very often.

The story we hear far less—but is every bit as true—is how students can change their universities for the better. In this issue of the Lehigh Bulletin, we are proud to share one such story—that of Matt McBride ’18.

McBride was not the first Lehigh baseball player selected in the Major League Baseball draft. But when the Cleveland Indians drafted McBride in 2006, they had to use their second-round pick to get him; never before had a Lehigh player been drafted higher than the 10th round. 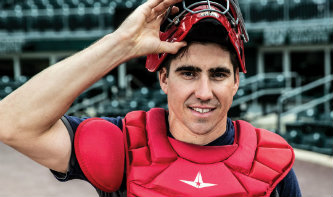 Since then, McBride’s career has been typical of many who choose the difficult path of professional baseball: stints in the big leagues, stretches in the minor leagues. Currently, he finds himself back here at home, playing for the Lehigh Valley IronPigs. And while McBride hasn’t given up on a return to the show, his time with the IronPigs does have one major benefit: It allows him to stay connected with the program that helped propel him into the professional ranks.

As it turns out, that program owes as much to McBride as McBride owes to it.

As you’ll read in “A Great Catch” by writer Stephen Gross (Page 34), McBride’s selection in 2006 has fundamentally changed the way the baseball world views Lehigh players. The program’s recent history is proof: Since 2015, six players have been selected in the draft, the most recent being pitchers Levi Stout (3rd round) and Jason Reynolds (32nd), who were drafted in June. The reason, says Lehigh manager Sean Leary, is quite simple: McBride.

“I think a couple [of our players] may have been missed before Matt was here because we still hadn’t earned that sort of respect across the scouting world,” Leary says. “Now we’re in a position where it’s a no-brainer.”

McBride’s story is a great one, which is why we share it with you in this issue. As editor, I would be remiss if I didn’t ask you to share your Lehigh story—how Lehigh changed you, or how a fellow alum, professor or colleague changed Lehigh. You can send these to me at tih313@lehigh.edu, and we will run them in the next issue.

I hope you enjoy this issue of the Bulletin, which also includes updates on campus construction and the many important initiatives of the Path to Prominence; a fascinating story about one alum’s unique connection to Salvador Dali; and, notably, an in-depth look at the ever-strengthening relationship between
Lehigh and Bethlehem.

Thank you for reading.