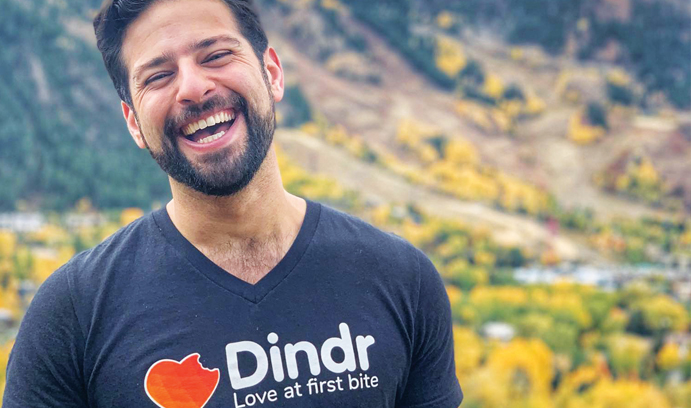 In Houston, working as an ethanol logistics coordinator just a few years after graduating from Lehigh, Zach Casler ’12 had achieved his career goal to make it into oil trading.

He had a problem, however.

Casler had lunch with clients regularly and felt he was spending too much time figuring out where to go. So in 2015, he began working evenings with a longtime friend to find a solution. That’s when Dindr, an app that makes it easy to find a place to eat, was born.

At first, users simply swiped on pictures of food and drinks to find somewhere to grab a bite. It solved Casler’s original dilemma, but he quickly found it didn’t solve all users’ issues. People wanted someone to eat with.

Enter a new team of developers in 2016, and an app was created that more closely resembles what Dindr is today—a social matchmaking tool that also sets up a time and place for people to meet for dinner or drinks.

“People really like the concept of it, and people really enjoy the concept around dining together,” Casler says. “The initial success came from kind of launching that and people were really happy about the idea of being able to eat with other people.”

In April 2016, Casler quit his job to focus on Dindr. After three product iterations, he later found himself designing a dating app focused on dates over food and drink.

Traditional dating apps allow users to connect online via chat, but the actual success rate of meeting in-person is low, Casler says. Not helping users find a time and place to meet is a factor. Dindr’s match-to-meet rate of 30 percent is higher than other matchmaking sites, he says.

Currently Dindr is fully operational in Austin, Texas, where Casler now lives. Users hop on the app to go through a 10-minute speed dating-type round. They can scroll through up to 15 “instagram-style” profiles. Profile suggestions are based on complex algorithms, taking into account lifestyle and food preferences. A vote of yes or no is made for each and, if applicable, a match is made. Those selected for a match are asked to pick a time to meet. Dindr then suggests places to go, including local restaurants, coffee shops and bars.

Users receive just one match per day in order to encourage them to actually meet.

As of mid-June, the app had almost 6,500 accounts, even though marketing hasn’t yet been a focus. Still, Dindr has garnered media coverage from outlets such as ABC’s The Chew, Business Insider and Italian editions of Vogue and Vanity Fair.

“The initial release of the app was the beta test, so we wanted to make sure our system worked before we sent it out to everyone,” Casler says. “We are taking some time to refine what people who are downloading the app see before we continue our marketing.”

The team is refining the product before launching in other cities. It is looking at a number of improvements including integrating OpenTable, which would help couples make reservations right from the app. Reservations aren’t a necessity in Austin but might be in a place like New York City. Casler also would like to provide a service that helps people figure out where to go on subsequent dates, even if they’ve been dating for a longer period.

Casler hopes to raise a seed round of funding and expand to New York City by late 2018, then to additional cities, maybe even Europe.

As much as user feedback helped shape Dindr, Casler said his Lehigh experiences played a vital role as well.

At Lehigh, Casler majored in accounting and supply chain management and minored in earth and environmental science. He credits his accounting background as helpful in his entrepreneurial adventure, as well as an integrated product development course that he said “was a great way to learn about working with a team, figuring out problems and iterate on product ideas.”