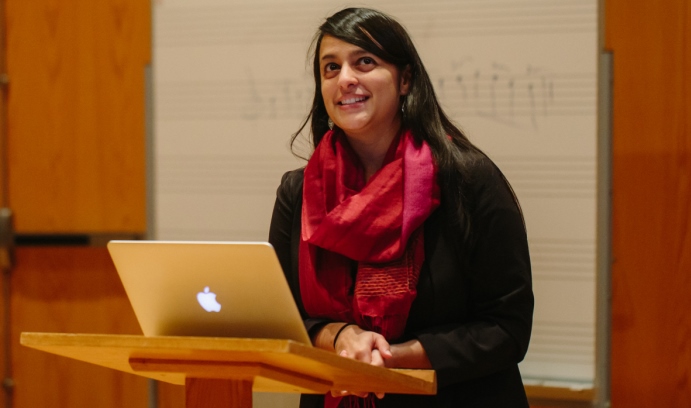 Composer Reena Esmail gives a presentation to Lehigh student musicians in the Zoellner Arts Center. Esmail’s “I Rise: Women in Song” was given its world premiere by Lehigh University Choral Arts on Nov. 4. (Photo by Christa Neu)

In celebration of the 10th anniversary of Dolce, the Lehigh women's choral ensemble, the music department commissioned a new choral work and premiered it Nov. 4 and 5 in Baker Hall at the Zoellner Arts Center. The performance also marked the 45th anniversary of the admission of women undergraduate students to Lehigh.

Sun Min Lee, the Robert Cutler Professor of Practice in Choral Arts and director of Dolce, helped select Los Angeles composer Reena Esmail to create the work, which is titled I Rise: Women in Song.

Supported by funding from Ronald Ulrich '67, the 20-minute work will be sung by the women of three music department ensembles—Choral Union, the University Choir and Dolce—under the direction of Lee.

Lee worked with Steven Sametz, artistic director of Lehigh University Choral Arts, to create a list of possible composers nationally who might be approached to create the new celebratory work.

"We interviewed many candidates, but Reena Esmail really understood why we were doing this, the music, the women's spirit in the work and the words," says Lee. "We had a good, common-sense discussion about making a new work together."

Esmail is known for composing richly melodic works. A graduate of Juilliard and Yale School of Music, and a 2011-12 Fulbright grantee to India, Esmail's work draws elements from both Western and Hindustani classical music. Her works have received honors from the American Academy of Arts and Letters and the American Society of Composers, Authors and Publishers and have been performed internationally. At Lehigh, Esmail served as the Ronald J. Ulrich Artist-in-Residence.

Lee selected the texts of the new works, focusing on American women writers. She chose Eleanor Roosevelt, Maya Angelou and Emily Dickinson. Additionally, Arlene Geller, a Bucks County poet, wrote a commissioned poem for the work. Lee sent the texts to Esmail and provided suggestions regarding structure and tone of the piece. From those discussions, Esmail proposed an outline for a new work in five movements for 160 women singers and an orchestra.

"I'm very excited to bring her work to Lehigh," says Lee. "She's a young, brilliant composer whose work has been performed at major venues throughout the world. We had several conversations about the tone of the work. I wanted something that would be inspirational to the women at Lehigh. I am in my fourth year now teaching at Lehigh, and I so enjoy making music with the phenomenal women of Lehigh, so I thought this would be a great opportunity to celebrate and feature them in this new work."

"Zoellner is a place where we continually support the creation of new music," says Sametz. "Either through our summer Choral Composers Forum, where composers from all over the country create new works, or presentation of faculty and student works or in the commissioning of contemporary composers premiering at Lehigh, our singers are part of the creative process. I'm thrilled that Reena Esmail wrote a new work for our women and that she, and Ola Gjeilo, both came to Lehigh to work with our students and the community members who sing as part of Lehigh Choral Arts. So our singers worked with the three composers 'live' as they prepared the works for the opening concert of the season." 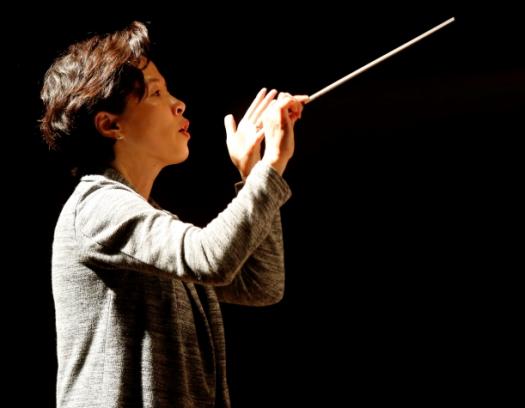 Sun Min Lee, the Robert Cutler Professor of Practice in Choral Arts, guides the women of Lehigh Choral Arts through a dress rehearsal of Reena Esmail’s “I Rise: Women in Song.” (Photo by Stephanie Veto) 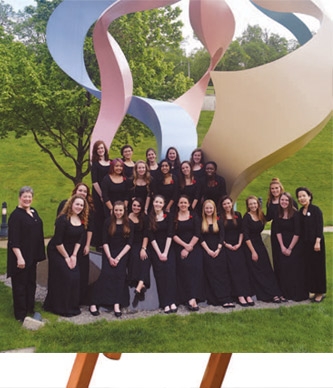 The repertoire of Dolce, the Lehigh women’s choral ensemble, ranges from the medieval and Renaissance period to the contemporary era. (Photo courtesy of Lehigh University department of music)