Like many filmmakers, Nadia Sasso ’14G has faced the challenge of securing the resources necessary to complete her project. She’s also overcome it.

Sasso, a graduate student in American studies who is also completing a certificate in documentary film, is the creator of Am I: The Film, which highlights the unique stories of women and their identity development, with respect to their West African and American cultural experiences.

Production of the documentary meant multiple trips to Sierra Leone—where Sasso’s family is from—and Ghana to conduct interviews. She also needed to hire an editor and cinematographer. A Strohl Graduate Summer Research Fellowship from the College of Arts and Sciences helped Sasso cover some of her costs, but it wasn’t enough. And that’s when she really got to work.

“This project is extremely important to me,” she said. “So I had to be creative and get the resources needed to finish.” To complete Am I, then, she created a profile on Indiegogo, a crowdfunding website which allows users to receive support from people around the world. On January 9, Sasso began her fundraising campaign and released a seven- minute trailer for the film. Six weeks later, on February 21, she closed the campaign after raising $5,680, surpassing her goal by $680. “The support has been great,” said Sasso, who premiered her film at Lehigh on April 15. “It helped validate the fact that this story needs to be told.”

In addition to Am I,  Sasso has worked on two other films at Lehigh: From Steel to Sands: Capital Exploitation as part of the “Community Study through Documentary Film” course offered by American studies, and The First Four, a documentary highlighting four of the first five women appointed as faculty members in Lehigh’s English department.

She credits Lehigh for giving her the freedom to pursue her dreams.

“Coming to Lehigh, American studies offered the closest program to an open-ended media concentration,” said Sasso. “I’m able to build more media-related skills, so I can not only write, but keep up with the digital age and tell stories in a different way.” 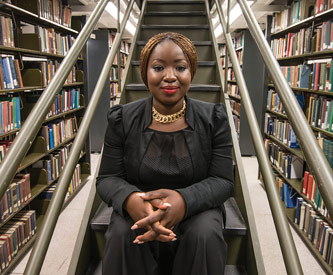