What Holds Our Universe Together? 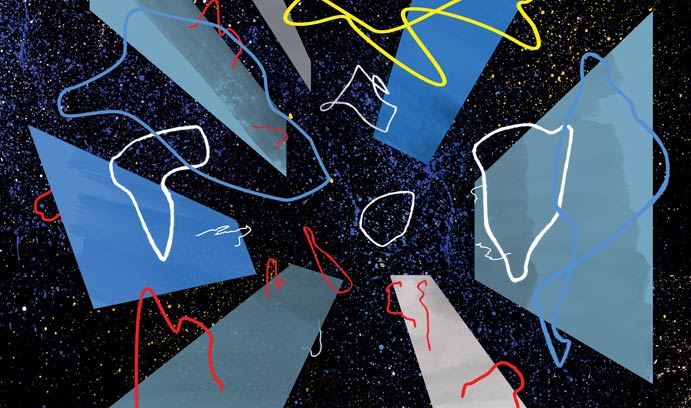 The secrets to some of the universe’s biggest mysteries, Sera Cremonini believes, may well lie in the behavior of its tiniest constituents.

Consider the beginning of the universe. In a fraction of a second after the Big Bang 14 billion years ago, an immense amount of tightly confined matter exploded into a super-hot sea of subatomic particles.
And consider the black holes that form when massive stars collapse. They compress matter so densely that nothing that enters their domain, not even light, ever escapes.

How did the universe’s first particles interact? How did they form quarks, and how did these combine to form the first protons and neutrons? And what laws govern a black hole’s “gravitational singularity,” a tear in the fabric of spacetime, where density and gravity become infinite?

Cremonini, an assistant professor of physics, probes these questions through the lens of string theory, which proposes that every particle in the universe is made of tiny vibrating strings of energy. Measuring just 10-34 meters, a string compares in size to a quark as an atom compares in size to the Earth.

Strings are one-dimension objects, possessing length but not width. They can be open-ended, form a closed loop, or attach to membranes, or branes, which could be tiny or could fill the entire universe. Like guitar strings tuned to produce different frequencies, the vibrations of strings can be associated with the various particles we are familiar with. One of these corresponds to the graviton, the particle that is believed to carry the gravitational force. The way in which strings and membranes arrange themselves and interact with each other gives rise to the properties of the subatomic particles we observe.

“The idea behind string theory is simple,” says Cremonini. “Look deep inside any particle and you’ll see this tiny vibrating string. This is the fundamental unit we’ve been searching for, the fundamental entity that makes up everything.”

String theory, says Cremonini, is the best framework yet devised to bridge the two incompatible theories that describe how the universe works. Albert Einstein’s general theory of relativity teaches that gravity is the bending of space and time; it is deterministic and it describes large-scale phenomena. Quantum mechanics is probabilistic; it governs the behavior of atomic and subatomic particles.

“Einstein’s theory of general relativity is a beautiful, well-tested theory that tells us how massive objects warp the fabric of spacetime,” says Cremonini. “Because of it, we have GPS systems and we understand the orbits of planets and the bending of light around galaxies. And only last year, the LIGO [Laser Interferometer Gravitational-Wave Observatory] experiment detected for the first time gravitational waves, which Einstein predicted 100 years before. These are ripples in spacetime itself, caused by the collision between two black holes, a spectacular confirmation of general relativity.

“But general relativity works well only at large distances or large scales—with a planet, an apple or an airplane. The theory fails to describe gravity everywhere in the universe. It breaks down when you go to very, very short distances, where the effects of quantum mechanics cannot be ignored.

“General relativity and quantum mechanics explain their respective regimes well, but we need a theory, a theory of quantum gravity, which unifies both of them, in order to describe situations in which gravitational and quantum effects are equally important.

"String theory right now is the most promising and consistent framework we have to shed light on the quantum nature of gravity. It is a set of tools we can use to answer questions about the beginning of the universe, the behavior and properties of black holes, and the fabric of spacetime. All of these ideas go together."

Cremonini recently received a three-year grant from the National Science Foundation to study the microstructure of spacetime, the four-dimensional continuum into which the three physical dimensions are woven with time. By utilizing a technique called holography, she hopes to shed light on phenomena ranging from the immediate aftermath of the Big Bang to the structure and properties of black holes to the behavior of unconventional materials like high-temperature superconductors.

Cremonini begins much of her research with a pencil and a sheet of paper, writing differential equations not much more complicated than those that students learn to solve in college calculus. The equations are those of general relativity with quantum field theory and string theory.

“A lot of these calculations require physical intuition,” she says. “Some of them can be done by hand. Once I’ve set up a problem in the right way, then I use the computer to help.”

Like most physicists, Cremonini makes many approximations and assumptions about the real world. This is especially important with string theory as scientists have not yet developed tools that can produce or observe strings.

“There’s a joke in physics about a spherical cow,” she says. “Most of the problems physicists work on require us to make approximations of the real world, like taking a cow and making it spherical because a sphere is a lot easier to model than a real cow.

“We don’t have the mathematical tools to solve certain problems, so we are forced to make simplifications and approximations that reduce them to something we can tackle. We have to relate a problem we don’t know how to solve to something that we know is solvable without losing its essential physical properties.”

A duality in string theory, says Cremonini, gives insights into how gravity relates to the world of quantum mechanics. Some aspects of gravitational spacetime, she says, have alternative descriptions in the quantum world.

Like a French-German or Japanese-English dictionary, says Cremonini, a gravitational theory and its corresponding quantum theory contain the same amount of information but are written with different words and conventions. Holography offers a “rich web” of connections, Cremonini says, that make it possible to translate between gravity and the quantum world, and to think in an entirely new way about some of their most challenging aspects. As it turns out, a problem that is difficult to solve in one domain can be translated into the other one—usually the gravitational domain—where it can be more easily solved.

The goal of Cremonini’s current research is to expand the scope of problems to which holographic techniques can be effectively applied.

“Holographic techniques were originally developed for simple systems that are well-behaved, have a lot of symmetry and are not too realistic,” she says. “We’ve found that these techniques are much broader and quite powerful. I’m asking how much we can extend and generalize these ideas to more complex systems with less symmetry, which are closer to our universe, and therefore more realistic.

“Physicists like to think of things in terms of symmetries. Most of our progress, especially in particle physics, has relied on understanding systems that are highly symmetric; they are simply easier to understand. But in real life, nature has many mechanisms to break symmetries, and processes are dynamical and much more complicated.”

The problems that pose the greatest challenge to physicists, says Cremonini, usually involve systems whose constituents—electrons, for example—interact strongly with each other. In these cases, modeling how the systems behave at different temperatures, or how they undergo phase transitions from one state to another, is notoriously difficult.

One of the phase transitions that Cremonini has studied occurs in a quantum system called “quark-gluon plasma.” According to the theory of quantum chromodynamics (QCD), the protons and neutrons that make up the nucleus of an atom are themselves made up of three small quarks that are tightly bound to each other by particles called gluons. At sufficiently high energies, in a phenomenon that echoes the state of the early universe, quarks and gluons separate physically and float freely in a hot soup, or plasma. The phase transition that unbinds quarks is known as QCD deconfinement and is the subject of experiments at the Relativistic Heavy Ion Collider at Brookhaven National Laboratory, and the Large Hadron Collider at CERN, the European Organization for Nuclear Research in Switzerland.

“Because of the strong interactions between quarks and gluons,” says Cremonini, “this system is very difficult to study. But it can be mapped to an appropriate gravitational system, where some of its properties are much easier to probe.”

In her NSF project, Cremonini is seeking to use holographic techniques to study quantum phases of matter whose behavior is poorly understood, precisely because of such strong interactions. An example is that of high-temperature superconductors, which achieve superconductivity at temperatures as high as -70 degrees Celsius, compared to the -240-degree threshold for ordinary metallic superconducting materials.

Because they have strongly interacting constituents, says Cremonini, high-temperature superconductors are much more challenging to model than regular superconductors.

“High-temperature superconductors are very interesting materials, but there’s no deep understanding of why they superconduct,” she says. “The behavior of the constituents of those materials is very strange. Their electrons are so entangled and interact so strongly that we can’t really understand their behavior using the techniques we would normally use for regular superconductors or conventional metals. Holographic techniques give us a way to write tractable calculations that make it possible to model these systems and their unusual properties.”

“In physics, it’s important to understand how systems behave when you drain away their energy and what state they relax down to. Behavior is a function of energy.

“Think of what happens when water boils. A bubble forms—an instability in the system—and starts to grow. Then more bubbles form and grow into a steaming mass. That’s how we think of phase transitions; they are there because an instability forms and then grows. In my work I am exploring a variety of quantum phases and the types of instabilities that can result.”

In her NSF project, Cremonini is also exploring how gravity emerges from microscopic, quantum-mechanical constituents. She hopes her answers will shed light on the structure of spacetime, the beginning and early evolution of the universe, and the physics of black holes.

“String theory has given us a lot of insights into the relationship between general relativity and quantum mechanics, especially in the last 20 years. It has helped us learn about the fundamental structure of black holes. We know black holes have temperature, meaning there is entropy associated with them. But entropy is not only a measure of disorder. It also tells us that the black hole should be made up of a bunch of microscopic bits. One of the great successes of string theory is that it has given us a way to calculate the microscopic bits that make up certain black holes, and it has reproduced their entropy very precisely. This is remarkable, and it is a must for any theory of quantum gravity.

“Maybe there is another theory that can describe all of these phenomena. That’s possible, but so far, string theory is the best framework we have.” 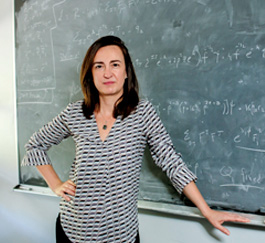 Sera Cremonini often begins her research by writing equations that represent approximations of the real world. 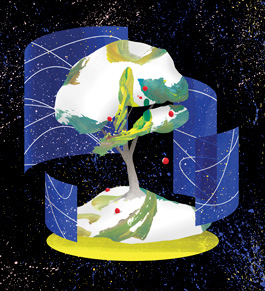 Holography's "rich web" of connections, says Cremonini, makes it possible to translate between a gravitational theory and its corresponding quantum theory.