Welcome to the South Side 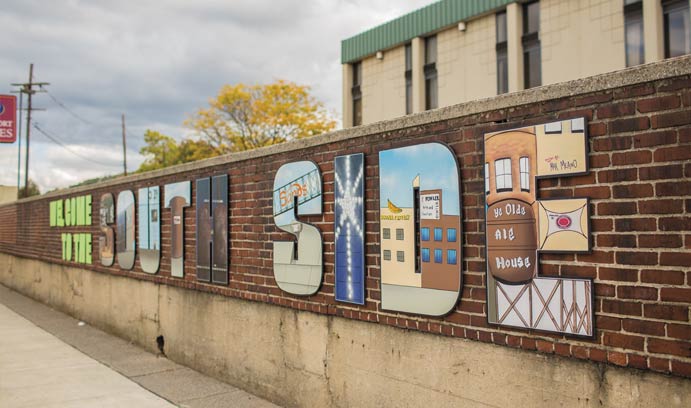 This public art project, conceived by Lehigh students, is a welcoming point for South Side Bethlehem.

Look closely at the new mural greeting visitors to South Side Bethlehem and there, sketched onto one of its 3.5-foot letters, is an image of Lehigh’s alumni building and iconic fountain. That Lehigh is among the selected images representing Bethlehem’s past and future is fitting, as the university celebrates its Sesquicentennial and continues to be an integral part of the South Side.

But there’s another significant Lehigh connection—the public art project was conceived by Lehigh students in an urban planning workshop led by adjunct Karen Beck Pooley. Pooley had challenged the students to walk the South Side and talk to people in an effort to develop projects that could improve perceptions and encourage people to visit businesses and use the Greenway park.

Their efforts were supported by the South Side Initiative, which brings together faculty, students and staff to improve the quality of life in the city.

The students focused on a 160-foot-long brick wall in front of the Comfort Suites on W. Third Street. The wall was once part of a lumber company that dates back to the 19th century and whose founders were once among the city’s most influential families.

“In our class, we learned that 30 feet of blank wall is boring to the pedestrian,” said Courtney Thier ’15. “Our class brainstormed ideas to solve the ‘boring wall.’”

Students turned to graffiti artist Max Meano to make the wall a welcoming point. A few sketches later, the project was approved by the South Bethlehem Historic Conservation Commission and city officials.

In addition to Lehigh, the images in the sign depict other aspects of the South Side, including ArtsQuest and the old Bethlehem Steel blast furnaces.

“People who pass by the mural will feel the presence of the community and what it has to offer,” Thier said. “I am hoping the artwork will create a feeling of safety and security for those who pass by it.”

The sign is already having an impact, Pooley said, as it has generated media attention. She said other ideas that aim to improve the South Side’s walkability will be handed off to other students to pursue. “It’s powerful to them to see something get off the ground,” Pooley said. 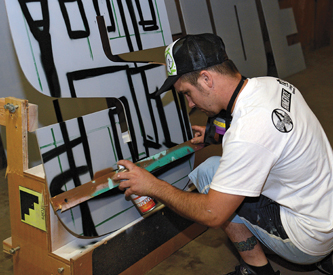