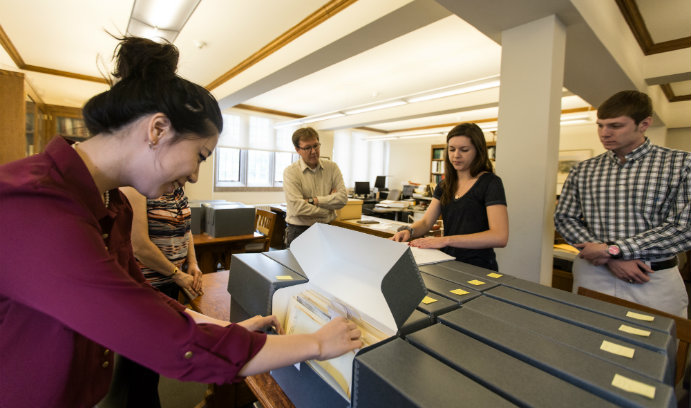 As one of three project interns processing and cataloguing the “hidden” collections of the Linderman Library, Briden is getting a first-hand look at Fisher’s work, from his photos and analyses of bridge collapses to his opinions on the design of a drawbridge over the Potomac River.

Along with Greg Edwards ’14 and Zion Um ’15, she is taking part in a two-year project at Linderman Library to process and catalogue several historically significant collections, including Fisher’s papers and those of civil engineering great Blair Birdsall and eminent engineering researcher Willis Slater.

Also, some 5,000 slides and documents that are part of the archives of the Council on Tall Buildings and Urban Habitat are being catalogued, along with 200 postcards that feature American bridges. The Tall Buildings council was founded at Lehigh in 1969 by the late Lynn S. Beedle, director of research at Fritz Lab, and it remained at the university until 2003.

“I’m learning a ton,” said Briden, a civil engineering major who is focusing on Fisher’s papers. “That’s why it’s not really work to me.”
The project, “Bridge and Building Forensics: Civil Engineering Archives at Lehigh University,” is made possible by a $93,700 grant from the Council on Library and Information Resources, as part of its Cataloging Hidden Special Collections and Archives program. The Mellon Foundation funds the program, which supports the cataloging of special collections of high scholarly value that are difficult to locate.

The award from the Mellon Foundation, said Black, “is testimony to just how important our collections are.”

The project will advance Lehigh’s mission of serving as a primary resource center for collections in the history of technology. Included in the civil engineering archives are records from the Tappan Zee, Verrazano, Golden Gate, Brooklyn, and Akashi bridges, in addition to the Washington Metro.
The library received the project grant in December. The work on cataloguing the archives began in April.

Consider the scope of the archival material:

• Fisher, the Joseph T. Stuart Professor Emeritus of Civil Engineering, earned an M.S. (1958) and Ph.D. (1964) from Lehigh and founded the university’s ATLSS (Advanced Technology for Large Structural Systems) Center in the mid-1980s. Internationally renowned for his expertise in fatigue and cracking of steel bridges, he has investigated some of the world’s most notable structural failures in the last half century. He served on a panel of national experts that investigated the collapse of the World Trade Center after the terrorist attacks of Sept. 11, 2001.

• Birdsall, an expert in suspension bridges and other cable systems, contributed to the design of many famous structures, including the Golden Gate Bridge. (The Birdsall family includes many Lehigh alumni.)

• Slater was a pioneering educator who was brought to Lehigh to direct the innovative Fritz Engineering Laboratory in the 1920s.

• The Tall Buildings Council founded by Beedle, whose career at Lehigh spanned six decades. Beedle, who earned an M.S. in 1949 and a Ph.D. in 1952 from Lehigh, was also internationally renowned for championing skyscrapers as aesthetically pleasing residential centers and viable alternatives to urban sprawl.
As part of the civil engineering archive project, the students are creating guides to make the collections more accessible to students, other researchers and the public.

“How is a researcher going to know what’s in 5,000 slides?” said Edwards, who is focusing on the Tall Buildings archives. “We can go through a collection on an item level and tell them what’s in it.”

Fisher’s papers provide insight, and lessons learned, in bridge and building collapses. His analyses and calculations examine why something happened, and how.

Here’s some of what the project interns have so far unearthed:

• Fisher’s written opinions on the best welding for the Woodrow Wilson Memorial Bridge, a drawbridge now spanning the Potomac River between Virginia and Maryland.

• Fisher’s written notes on what caused the collapse of a Marcy Pedestrian Bridge during construction in Oneida County, New York.

• Photos taken in the 1940s of the Brooklyn Bridge.

• Sketches of Battery City Park, created from the soil and rock excavated during construction of the World Trade Center in New York.

• Slides of the early World Trade Center construction. The Twin Towers’ floor system, concrete decks and steel trusses were tested at Fritz Lab in the 1970s.

“You’re always learning something, and always something historical, with every slide, every item, every report,” said Edwards.

“In special collections,” said Black, “we always have a story to tell.”
Photos by Christa Neu 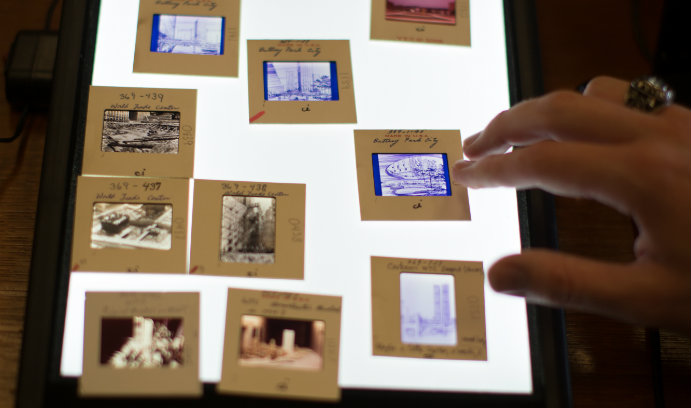 These slides are part of the archives of the Council on Tall Buildings and Urban Habitat. 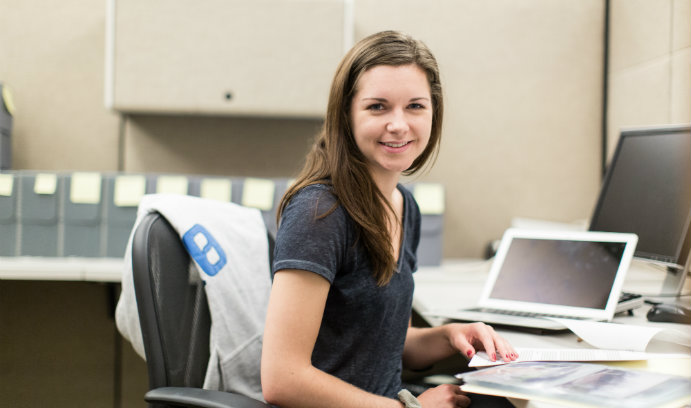 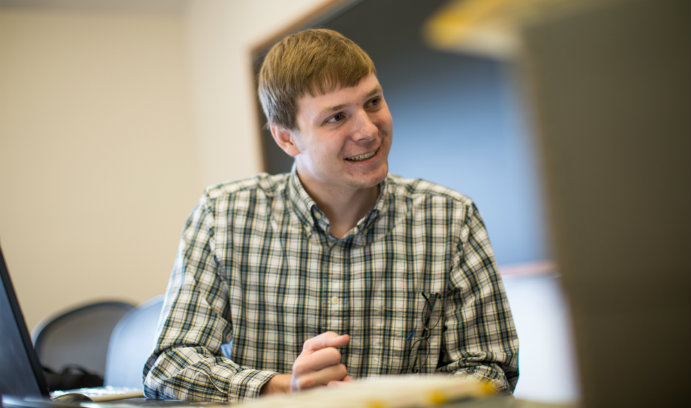 Greg Edwards is processing the archives of the Council on Tall Buildings and Urban Habitat. 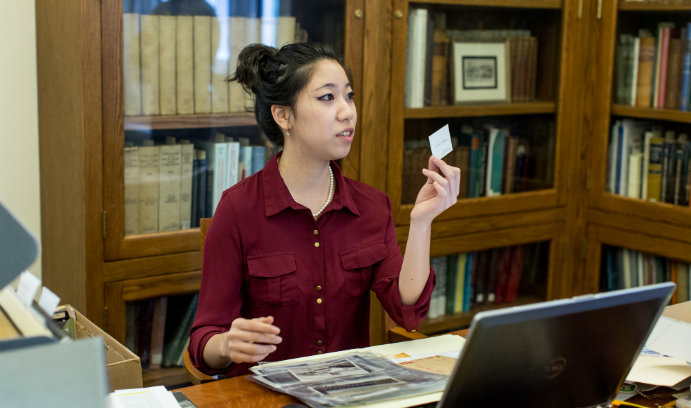 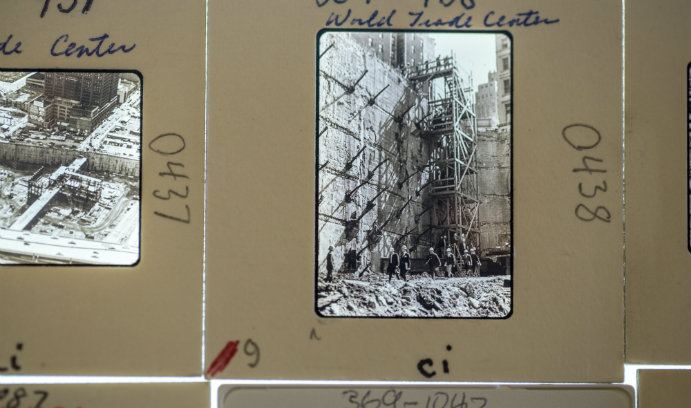 These slides show early construction of the World Trade Center. 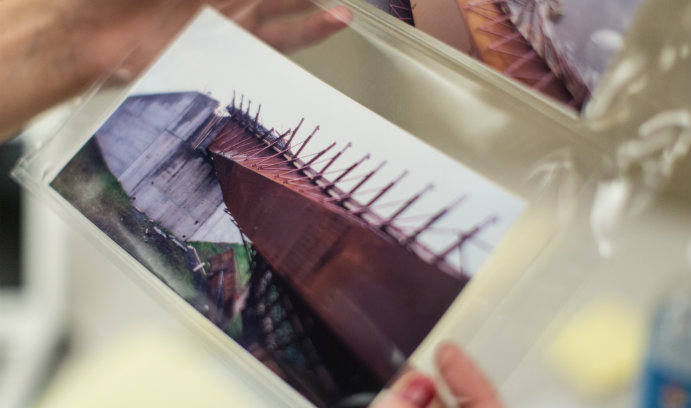 A photo of a pedestrian bridge collapse that is part of John Fisher's papers.