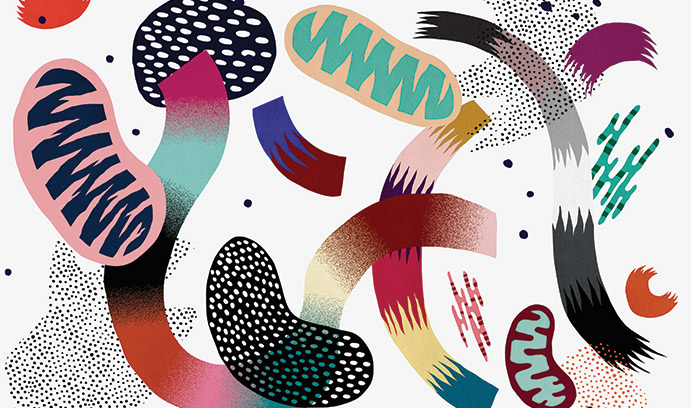 In the battle against drug-resistant bacteria, Marcos Pires studies the chemical biology of bacterial cell surfaces to better understand how they function—and possibly how to manipulate them. (Illustration by Hvass & Hannibal)

Alexander Fleming discovered the original antibiotic, penicillin, completely by chance in 1928. Fleming later won a Nobel Prize for his discovery, which was considered a miracle drug. However, Fleming himself recognized the potential for the development of drug-resistant bacteria.

"I would like to sound one note of warning," Fleming said during his Nobel lecture in December 1945. "... It is not difficult to make microbes resistant to penicillin in the laboratory by exposing them to concentrations not sufficient to kill them, and the same thing has occasionally happened in the body."

Fleming went on to describe a hypothetical scenario in which "the ignorant man may easily underdose himself [with penicillin] and by exposing his microbes to nonlethal quantities of the drug make them resistant." If a man with a sore throat, "Mr. X," takes an insufficient amount of penicillin to kill the streptococci bacteria causing his infection, Fleming said, he allows the bacteria to develop a resistance to penicillin. When the man's wife, "Mrs. X," becomes infected by the same bacteria, penicillin treatment will be rendered ineffective and her infection may prove fatal.

"Who is primarily responsible for Mrs. X's death?" Fleming asked. "Why Mr. X, whose negligent use of penicillin changed the nature of the microbe. Moral: If you use penicillin, use enough."

Indeed, bacteria have evolved over time, limiting the effectiveness of penicillin and many other antibiotics. In the body, these drug-resistant bacteria survive antibiotic exposure and continue to multiply. According to the Centers for Disease Control and Prevention, more than 2 million people become infected with antibiotic-resistant bacteria each year, and approximately 23,000 of those die from these infections. The World Health Organization lists antibiotic resistance as one of the biggest threats to global health today.

Marcos Pires, assistant professor of chemistry, seeks to better understand the enemy in the fight against drug-resistant bacteria. He is tackling the problem of antibiotic resistance through the creation of synthetic amino acids intended to trick bacterial cells into using some of these unnatural building blocks instead of their own. Pires believes a potential line of defense may lie in how the microorganisms construct their peptidoglycan, or cell wall. The cell wall functions like a jacket that surrounds and protects bacteria from their surroundings.

"You really have to understand how bacteria are operating, and if you do, maybe you can find a way to disrupt it," he says.

In his initial work with bacteria, Pires and his team, inspired by the successful immunotherapy treatment of some cancers, exploited bacteria's unique use of D-amino acids to "trick" them into generating an in vitro immune response. Amino acids are the building blocks of all living organisms, and, unlike other cells, bacterial cells will incorporate D-amino acids into their cells from their external surroundings. Pires and his team created synthetic D-amino acids, tagged them with an antigen that draws a response from a pool of common human antibodies, and added the amino acids and the antibodies to a flask of bacteria. The bacteria then did the rest of the work. As they were growing, they were tricked into incorporating the lab-produced amino acids on their peptidoglycan, essentially marking themselves for destruction by the antibodies.

For this work, ACS Infectious Diseases in August 2016 named Pires a winner of its Young Investigator Award for "outstanding early career researchers."

Now, encouraged by his existing work, Pires is turning to the problem of antibiotic resistance and the role of the bacterial cell wall in its development. He uses bacteria's tendency to tweak their amino acids in response to antibiotics to once again "trick" them—this time into revealing information about themselves.

Many antibiotics operate by inhibiting how bacteria put together their cell wall, says Pires. In response, bacteria modify the amino acids, or "building blocks," on their cell wall to prevent the antibiotic from attaching to it.

In the same way it did in Pires' earlier research, the bacteria then places the lab-produced amino acid on its cell wall. Pires and his team add an antibiotic and monitor the process, using the marked synthetic amino acids to note any changes in the cell wall.

"That allows us to essentially follow how—or how quickly—the bacteria is becoming resistant," he explains. "We are able to see basically how long this takes."

Surprisingly, it doesn't take very long for resistance to develop. Within an hour, says Pires, bacteria adapt to escape the antibiotic. However, as soon as the antibiotic is removed, the bacteria begins returning to its original state. This demonstrates, he says, that the resistant state is "really stressful to the cell."

The team has charted this process with various types of bacteria and antibiotics to determine which types of bacteria respond to which antibiotics and how. They work with four to five types of harmless bacteria, some of which are considered "model organisms." "Usually it's the case that [when] you find something about their physiology, it will be the same more or less for the pathogenic bacteria," says Pires.

Pires believes that knowledge about bacterial physiology might help in the development of an antibiotic that can overcome changes to the cell wall. The best defense, after all, is a good offense—and a clear understanding of the enemy.

"I think now that things are a little bit more dicey [with drug resistance] and we really haven't been able to come up with new antibiotics, there's almost a revival in this [interest in] how cells are putting together their cell walls. Maybe from this we can learn how to design a drug," he says.

This story appears as "Know Thine Enemy" in the 2017 Lehigh Research Review.

By the time a patient arrives at a hospital with a bacterial infection, it’s often progressed significantly. The attending doctor can assume the bacteria is drug-resistant or wait the more than 24 hours it takes for a test to determine drug resistance. Because a delay could have catastrophic results, doctors often err on the side of caution and treat as if the bacteria is resistant, prescribing the last-resort antibiotic, which should only be given to truly drug-resistant infections.

“Doctors are really aware of the clock that starts once a patient shows up at the hospital, usually at a point that’s already pretty advanced. So they decide to play it safe,” says Pires. “If you do this enough there may not be a ‘next drug’ soon enough.”

Pires’ work in training bacteria to use unnatural amino acids has revealed a potential diagnostic application: a simple test that can determine, in a matter of hours, whether a particular bacteria will be drug-resistant and, if it is resistant, to which drug.

If a patient’s symptoms make it clear that they’re suffering from a bacterial infection, the next step is determining what type of bacteria is causing the infection. Even if doctors determine that with a test, the question of whether the particular strain is drug-resistant remains a guessing game.

“Knowing what you have doesn’t really tell you if you have the drug-resistant version of it or the drug-sensitive one,” says Pires. “It could be sensitive to your standard amoxicillin or it could be a resistant-across-the-board type of bacteria.”

In Pires’ diagnostic test, cells extracted from a patient are incubated with an unnatural, lab-created molecule. Within four hours, a drug-resistant strain of bacteria will utilize that molecule and place it on its cell wall. A dye injected into the flask will stick to the bacteria that has utilized the unnatural molecule, providing a “direct readout” that is specific to a particular type of resistance.

“The hope here is that from this test [doctors] know very quickly which antibiotic to give,” says Pires.