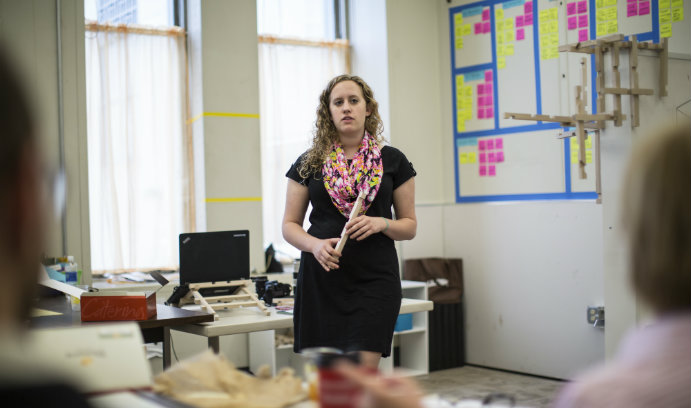 Shannon Varcoe ’15 has created a wooden building-block toy that she hopes to market. “In an age of electronic toys, it brings it back to the basics. You really can’t be bad at this,” she says.

As a kid, Shannon Varcoe never read the manuals that came with her toys and games.

So it’s fitting that Varcoe ’15 has created a wooden building-block toy that doesn’t come with a manual or instructions. “You let your creativity tell you what to do,” she says.

Funny thing, though: Varcoe didn’t set out to make a toy when she put together a wooden sculpture for a design class in her sophomore year. But the other students in her class started playing with the notched wooden pieces. And when she took some of the pieces home from college, a cousin who has Attention Deficit Disorder began playing with them too.

It got her thinking: “Could this be something?”

Today, Varcoe can be found at Mountaintop, in Launch Bay C, building on her idea. She is making more wooden prototypes, experimenting with different sizes, cuts and shapes. She is trying to figure out the number of pieces, and the lengths of those pieces, that should go into a wooden building-block set that she can sell.

She is also trying to come up with a name for her toy, a target market, and branding materials.

With hopes too of inspiring and helping those with ADD and Attention Deficient Hyperactivity Disorder (ADHD), she is studying how children with learning disabilities play and learn. She is designing her wooden blocks with those kids in mind.

“It’s very hands on,” says Varcoe, who is pursuing an Integrated Degree in Engineering, Arts and Sciences (IDEAS). “There’s really no wrong answer when you’re building with it. You can build whatever you want, with however many pieces you want.”

The toy’s pieces are made of unfinished, natural wood that vary in length, with angled cuts that allow for each piece to fit together. Though the toy is simple in design, she says, the structures that can be built are anything but simple. “It’s hard to build the same thing twice,” she says.

So far Varcoe has made more than 100 pieces with cuts of different angles. As she plays with the pieces, building around space, she has made both the abstract—which can hang as art work—as well as the practical, such as a laptop stand.

“In an age of electronic toys, it brings it back to the basics,” says Varcoe, describing her toy as she works with wooden pieces at her space in Launch Bay C. “You really can’t be bad at this.”

In the design class that got things rolling, Varcoe’s assignment was to create a sculpture inspired by three words pulled from a hat. She drew the words “small,” “minimal,” and “prop.” Varcoe had to work with paper, then poplar. She wound up cutting angled grooves in the wood as part of the function of her design.

When her cousin later played with the pieces, she says, “he was just combining them in all different ways and building different things.” He liked them so much that his mother eventually called her to ask for more pieces, which Varcoe gave as a Christmas gift. He also etched into them with wood-burning.

After the early interest, Varcoe began focusing on her project and taking the courses that could help her in her venture. Last year she won a first place in the Eureka! Social Ventures competition sponsored by the Baker Institute for Entrepreneurship, Creativity and Innovation. She also tested her toy at a Mini Maker Faire at Steel Stacks in Bethlehem, produced by the Baker Institute, where she found that children would instinctively pick up the pieces of her toy and play.

“I was really fascinated by the teamwork involved when kids played with it,” says Varcoe. “Kids who were strangers to each other were helping each other build things, or each kid was building something and figuring out ways to connect it. So that was really interesting.”

At the Mini Maker Faire, one child created a stool, then promptly sat on it. A mother and daughter competed to see who could build the tallest structure.

Varcoe took note of how many pieces the children used in their play—research into how many pieces, and what pieces, she should include in a set. She may do more research with children to try to come up with a name for the toy. “I haven’t found anything that fits what it is,” she says.

Through their play, kids can learn aspects of geometry, engineering and architecture. Varcoe says they can learn not only how to collaborate with design but also how to get something to be sturdy, stable and balanced. Kids might build something tall, then find that by turning their creation on its side they will make it look different.

Varcoe, who always wanted to be a toy inventor, has noticed that parents too have been eager to join in, perhaps out of nostalgia for the wooden toys they played with as kids. But, she says, they soon seem to realize that the toy is much different than something like Lincoln Logs and much more complex than they might have initially thought. She hopes she has created a toy that will be lasting.

Meanwhile, says Varcoe, “It’s been really fun and rewarding just to see people play with it and enjoy it.”