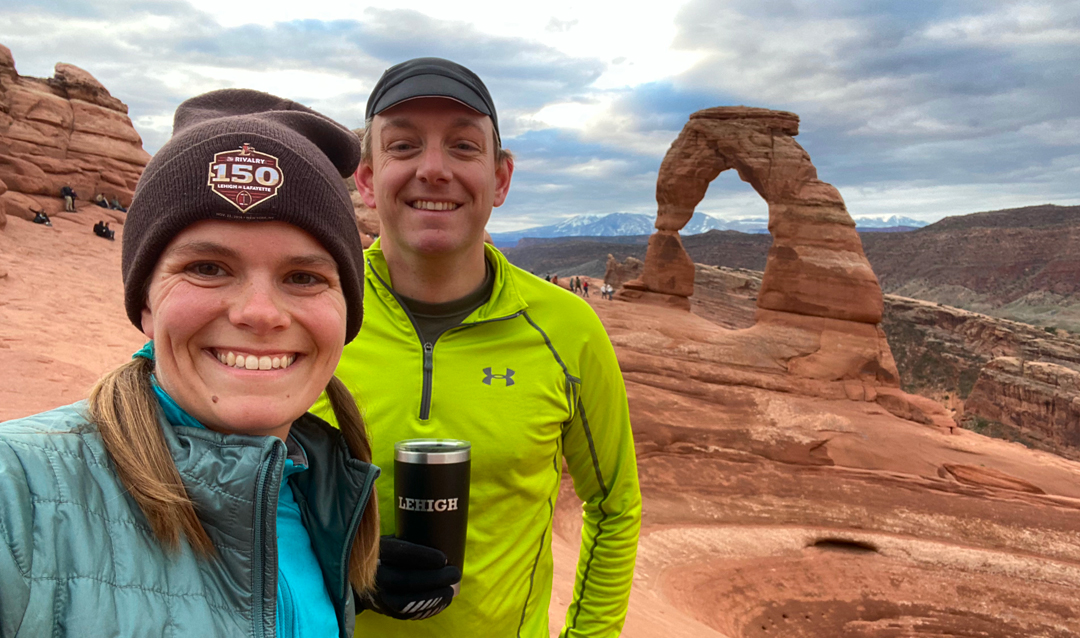 Katherine and Mike Hodsdon pose at Delicate Arch in Arches National Park in Utah. They built a tiny house on wheels to take them across the country.

With their 240-square-foot house on wheels, Katherine (Glass-Hardenbergh) Hodsdon ’11 and Mike Hodsdon ’10 have been traveling  the country–from the wide expanse of Lake Superior, where the crystal-clear water reflects the bright blue sky like a mirror, to the rainforests of the Pacific Northwest, where heavy moss clings to tree branches and ferns sprout like wall-to-wall green carpet.

Their home-away-from-home is tiny, but it has taken them on plenty of big adventures since June 2021, when the Hodsdons left their full-time residence in Boston to embark on a year-long tour across the United States. They’ve been documenting the trip on their Instagram page, tinyvacationhome.

“The experiences have been so different everywhere in the country,” Mike explained during a Zoom interview in December 2021 when the couple was visiting San Diego, Calif.

Katherine says she enjoyed Arches National Park in Utah, its red rocky terrain and natural stone arches like the surface of another planet. Mike says he liked the landscape in Arizona where saguaro cacti grow as thick and tall as telephone poles. The western part of the country is very different from what the couple is used to, with Mike growing up in Maine and Katherine in New Jersey before they met as Integrated Business and Engineering (IBE) students at Lehigh.

“We didn’t just want to be in the corporate world our entire lives and always working. We also wanted to experience life, and we probably watched a few too many of those tiny home shows on HGTV,” Katherine says. 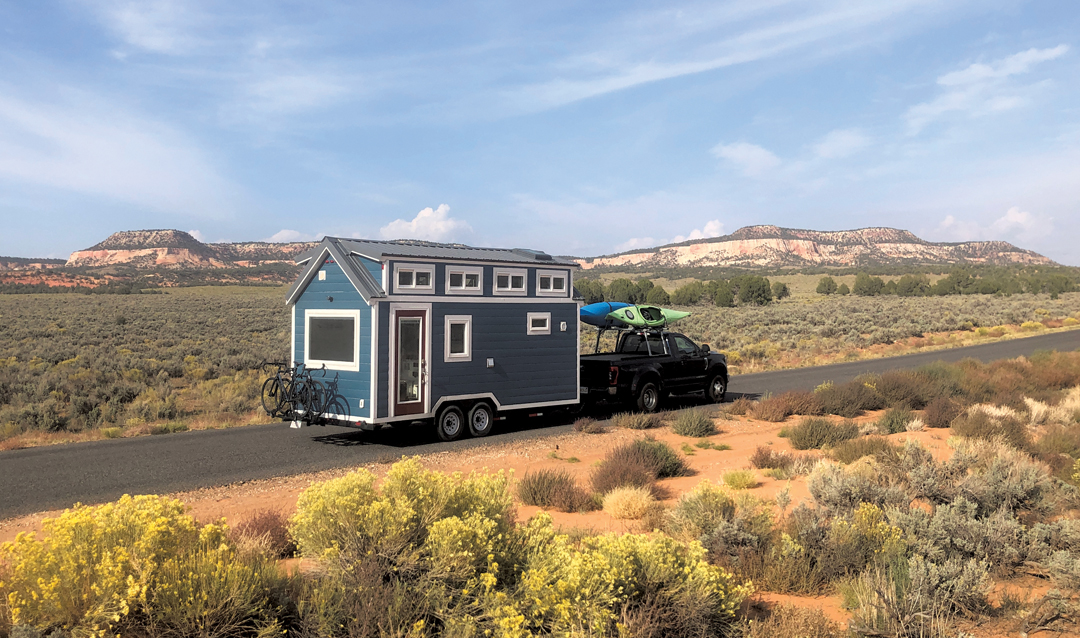 The tiny, mobile house the Hodsdons built and have been using to travel around the country.

They got inspiration from Tiny House Giant Journey, an alternative lifestyle blog about tiny house living written by a woman who in 2013 quit her job and built a tiny house to travel the country.

The trend of Lilliputian living is one that’s continuing to grow. Besides being able to take your house on the road, some of the benefits include shrinking one’s carbon footprint, using the home as a potential source of income, like an Airbnb, and the ability to live “off the grid” by installing solar panels and batteries, according to Comfy Living.

The Hodsdons started saving for their trip and the buildout of their tiny house five years ago. Mike says it was important to him that they be able to maintain the mortgage on their Boston home so they had a place in which to return. Katherine’s brother and a couple friends moved in to take care of the property while the Hodsdons were on the road.

They also quit their full-time corporate jobs in order to travel, but plan to re-enter the workforce when they return from their trip in the spring.

“We watched a lot of our family and friends go through careers and get to retirement and start traveling the country. If there was a way for us to swing it financially, we didn’t want to wait until we were 65 or 70,” Mike says.

They considered the trip “taking a year of retirement early.” For the physically active couple, that means being able to start the day with several miles of kayaking or biking and hiking through rugged country terrain–intense activity that might not be possible in their golden years. 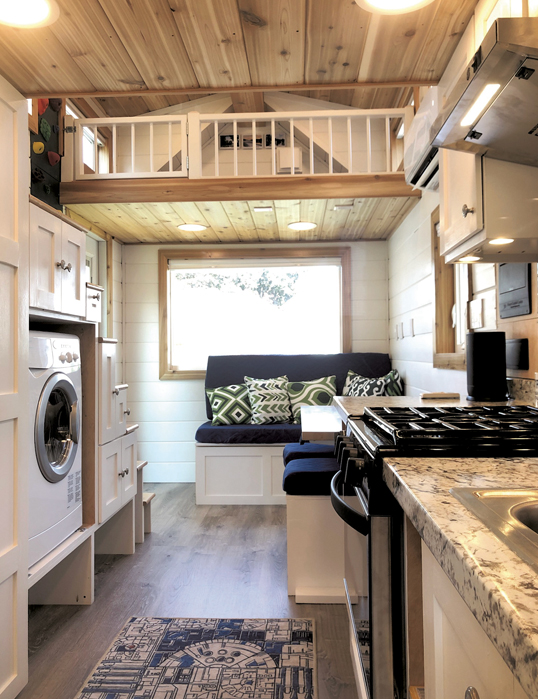 The interior of the Hodsdons' tiny house.

Building the house was “an absolutely massive learning curve,” Katherine says. While Mike grew up doing woodworking projects with his dad, Katherine had to learn how to use power tools. It wasn’t straightforward.

For the buildout, the Hodsdons made sure their vacation home had the same amenities as a normal house, such as plumbing, electricity, a washer, dryer and full kitchen, but in a tiny space that has to stand up to hours of shaking and “hurricane force winds” while driving down the highway, Mike says.

Other considerations included how they would use the space.

“Do we want to be able to have guests over?” Katherine says. “We would need to design a table for four people, so we designed one that pulls out of the wall and has ottomans to sit on, and those ottomans become part of the pull-out bed for our guests.”

It took two years to build the house in the backyard of their Boston home. Katherine and Mike say they recruited friends by promising them free beer and smoked meat. 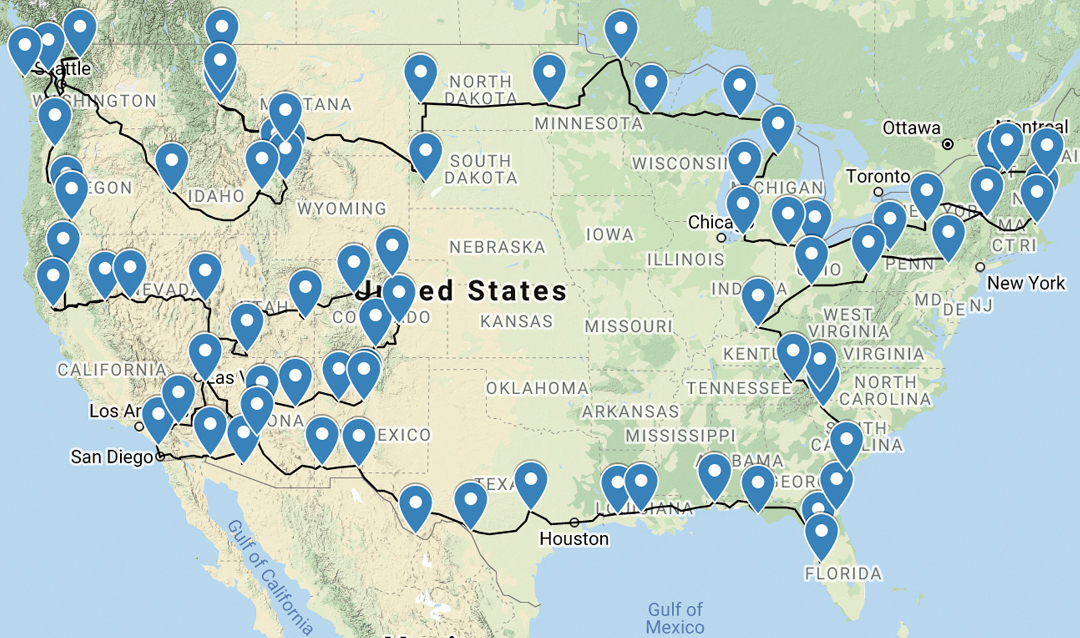 A map outlining the Hodsdons' trip. 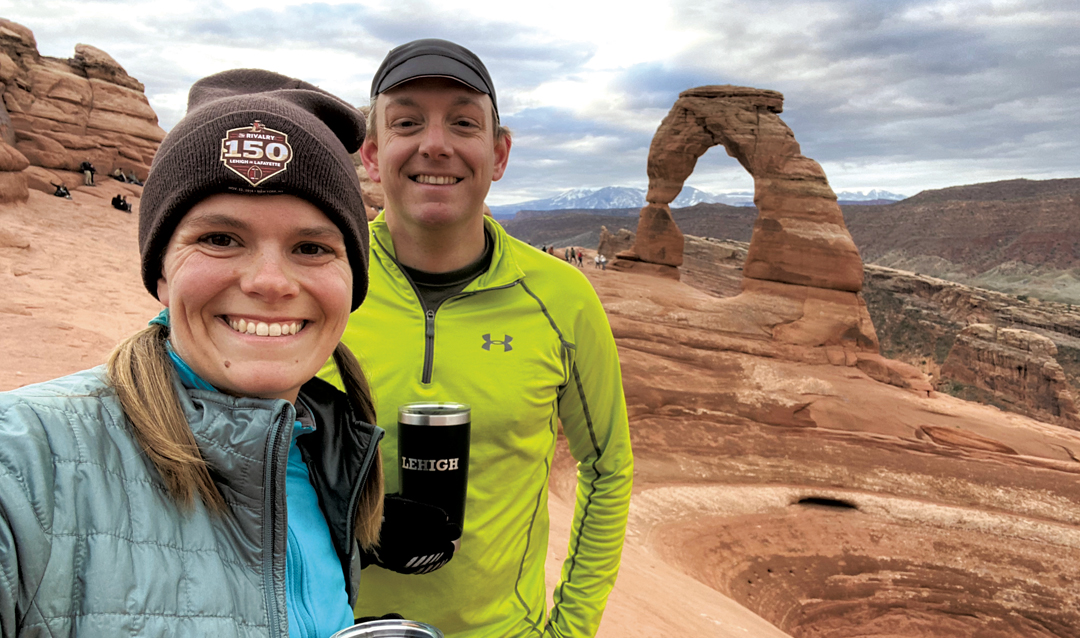 Katherine and Mike Hodsdon at Arches National Park in Utah. 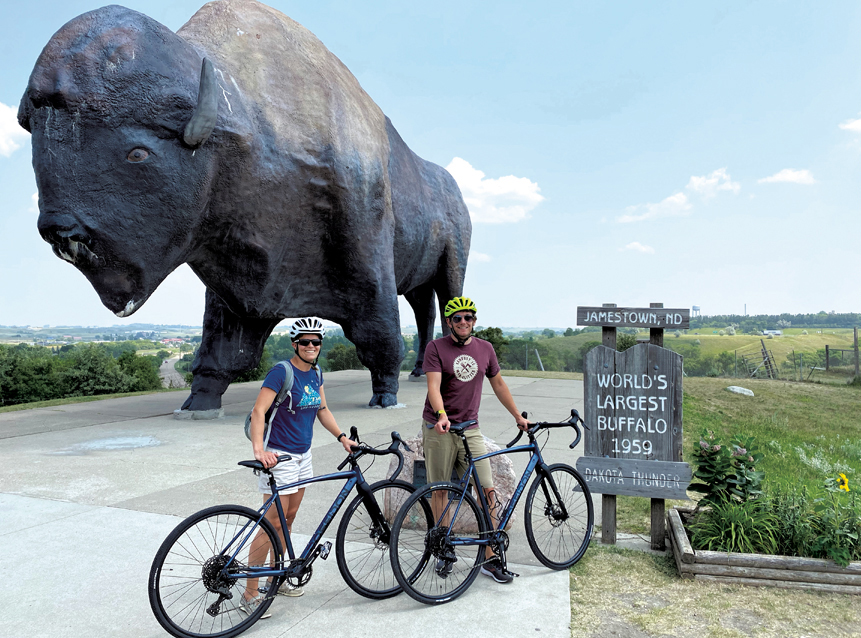 Katherine and Mike Hodsdon pose at a roadside attraction in North Dakota. 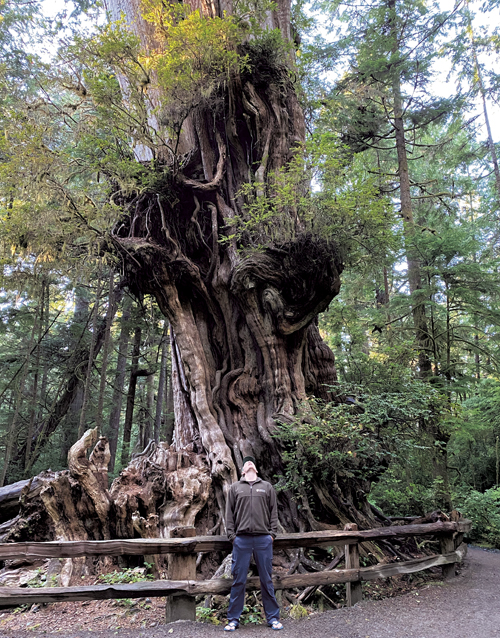 Mike Hodsdon poses under a tree at Olympic National Park in Washington.

The trip itself is a “giant counter-clockwise loop” around the country, Katherine says. Their strategy involved hitting northern locations during the summer months so the house wouldn’t get stuck in snow.

They started off rolling through New Hampshire and Maine, making a stop at Lake Champlain in New York and the sand dunes around Silver Lake in Michigan before heading to the Dakotas.

They spent most of the fall in the Southwest. During the winter they slowly started making their way through the southern part of the country, including Texas and Florida, before heading back to Boston in mid-March.

Luckily the trip has been relatively smooth so far. There was one hangup when the couple blew a tire while on a mountain pass near Grand Teton National Park in Wyoming. When they started on the trip things that went wrong seemed like a much bigger deal than they actually were, Mike explained, but with their experience on the road it doesn’t seem like such a big deal anymore.

“One of the goals for me was to get out into the country, but also invest time in our relationship and get to know each other really well,” Mike says. “It’s been really cool to see that growth…Now if something goes wrong, it’s like, ‘Ok, cool. How do we fix it?’”

Katherine agreed, the experience of building the house and the trip itself has renewed her confidence in her ability to tackle problems when they arise.

“I can figure it out. I can get there even if I don’t initially know what tool I need or how it works. The next thing that comes into our life, we will figure it out and get through it,” she said.

The Hodsdons plan to eventually buy a plot of land in Maine where they can permanently park the house and use it as a stationary getaway.

“We hope our story will get people to think about living their lives on their own terms, whatever that means for them,” Mike says, “because leaving our careers, building a house and going on the open road was crazy scary for us, but totally worth it.”