The unifying power of story 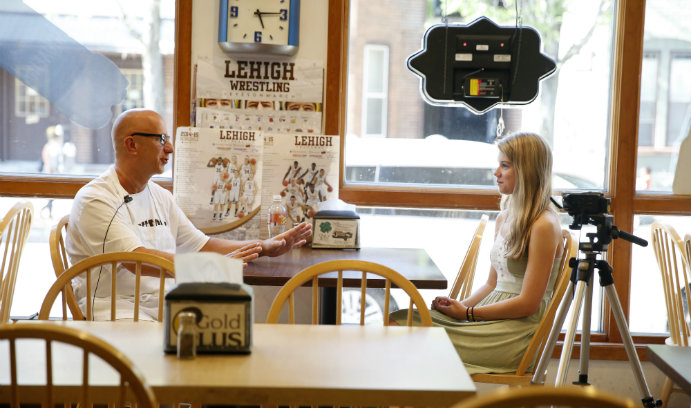 Before the Fahy Bridge spanned the Lehigh River to connect North and South Bethlehem, the New Street Bridge stood in its place. Local residents paid a penny to cross on foot.

This summer, Meg Kelly ’17, Elijah Ohrt ’16 and Juan Palacio Moreno ’17 learned of the penny bridge—and quite a few other things—through their interviews with South Bethlehem residents as part of their Mountaintop project, “Bethlehem Unbound: Storytelling, Beyond the Book.” After immersing themselves in the rich and sometimes unexpected stories of South Bethlehem residents and local business owners, the team created a collection of film clips that they hope will connect Lehigh and the South Side community thorough story, just as the bridge connects the two parts of Bethlehem with concrete and steel.

“Bethlehem has many stories to tell,” says project mentor David Fine, assistant director of the Global Citizenship Program and doctoral candidate in English. “There's been a lot of great work done at Lehigh with regard to archiving stories of Bethlehem's past, but there are so many people here now with experiences and stories to share. I wanted to collaborate with my students and colleagues to create a space for that work—that listening—to happen.”

Spurred on by a belief in the power of narrative to shape the way individuals understand their communities, Fine worked with Sarah Stanlick, professor of practice in sociology and anthropology and director of the Center for Community Engagement, to write the project’s open-ended proposal earlier this year. Mary Foltz, assistant professor of English, joined the group as a faculty mentor. Foltz had worked on similar humanities projects while in Buffalo, New York. Her work in Bethlehem is fostered by the English department's Literature and Social Justice emphasis, which examines aspects of storytelling that can foster discussions of social justice.

Stanlick was motivated by a collaborative storytelling project she’d done with young women in a domestic violence shelter in Lawrence, Massachusetts.

“It was just a beautiful experience,” says Stanlick, “because nobody had asked them [before]. Just to sit and say, ‘I care about you and I want to hear your story’—a lot of people don’t have that opportunity.”

“Bethlehem Unbound” provided that opportunity to many.

After reading about storytelling and considering its various forms, Kelly, Ohrt and Palacio Moreno decided that personal interviews would give members of the community and local small-business owners the best opportunity to share their stories with a wider audience.

The logistics of collecting so many stories proved challenging. Scheduling time with busy business owners wasn’t easy. Approaching strangers at local libraries or the Bethlehem Farmers’ Market, camera in hand, wasn’t any easier.

Over time, the students learned to approach people with increased confidence. They knocked on doors and distributed fliers. Palacio Moreno’s ability to speak Spanish welcomed and put at ease participants who did not speak English. Community “gatekeepers” were particularly helpful in turning small connections into larger ones. A conversation with someone at Touchstone Theater, for example, led to a fruitful interaction with the pastor and parishioners of Holy Infancy Parish. The team gathered stories from 42 individuals and families, all of whom provided a unique insight into South Bethlehem.

Interviews with the proprietors of eight South Bethlehem establishments—Cantelmi’s Hardware, The Lodge, Eskandalo, The Yoga Loft, The Goose, General Zapata, Jenny’s Kuali and local law firm Driscole Howell LLC—provided additional insight. Each interview also provided an opportunity for a proprietor to promote their business, impart some local history and share their South Side pride. The team then offered each business owner the completed video clips for use on business webpages or to share with friends and family.

On camera, Kelly, Ohrt and Palacio Moreno asked participants two questions: “What is your favorite memory of the South Side?” and “What are three words you’d use to describe the South Side?” The answers they received personalized South Bethlehem in a way that merely observing a community cannot.

These questions, says Foltz, are “not political, not engaging in any of sort of the hot-topic buttons that deal with political conversations about Bethlehem. ... Instead, [they’re asking], ‘What is this community about for you? What makes it special for you?’”

“Even though you’re not meeting this person face to face, [hearing the stories] encourages a relationship between the community and Lehigh. I think that the stories are going to encourage students to go off campus and visit these businesses, [and even those] that we haven’t highlighted, just because they’re going to feel safer off campus,” says Palacio Moreno.

Indeed, two words that many participants used to describe South Bethlehem were “peaceful” and “family-oriented.”

“Community members have a different story to tell themselves and us about what makes the South Side great,” says Foltz. “Whether they chose to discuss the birth of children and family life, sports events, or musical events in their discussions of the South Side, they consistently told stories about the generous and caring community in which we live and work.”

The team plans to hold a public screening of the clips, which can be found on YouTube, in the coming months at a local library. They’d also like to use it to educate Lehigh students about the community beyond campus and invite them to explore it. They hope the project will continue as a possible capstone project for Global Citizenship students or as a future Mountaintop project.

“We have a lot of wonderful things that are going on at Lehigh and we want to celebrate and we want to make sure that that work is honored, but I know that there’s a lot of room to grow,” says Stanlick. “[Projects like this allow people to] see step-by-step, this is what it’s like to engage meaningfully in a community. You get something really wonderful out of it for students, but then, more so, the community gets something in return. And I think that’s all we can ask for.”

“Quite simply,” says Fine, “I hope for members of the South Bethlehem community and Lehigh University to engage in conversation. As students, teachers and citizens, we need to practice listening and talking. We need to pay attention to difference and practice really respecting it. The project begins on that very simple, very human, level.”

And, much like that penny bridge, this Mountaintop project just might help connect Lehigh to that world.

The team gathered stories from 42 individuals and families as well as the proprietors of eight South Bethlehem establishments. The film clips can be found on YouTube. 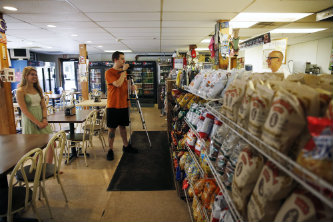 Kelly and Elijah Ohrt ’16 film Silvoy, who has been in business for 37 years.