The surprising world of energy 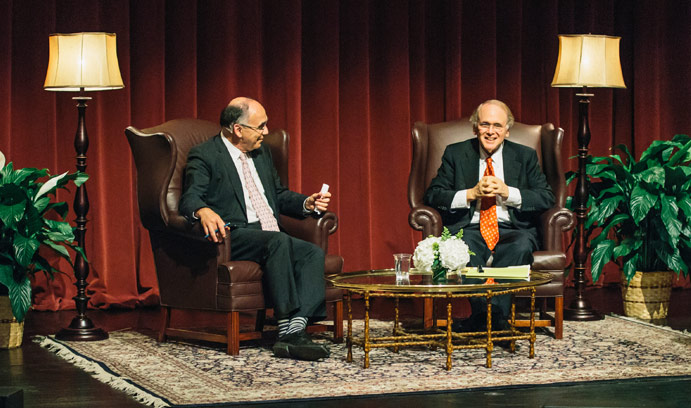 Daniel Yergin's appearance at Lehigh was sponsored by Jeanne and Herbert J. Siegel '50.

“In many ways, Lehigh is connected to the energy world,” author and global energy expert Daniel Yergin said here this spring in an address at the Zoellner Arts Center.

Yergin was referring to the Lehigh alumni mentioned in his 1992 Pulitzer Prize-winning book The Prize: The Epic Quest for Oil, Money and Power. One of them is Ali al-Naimi ‘62, Saudi Minister of Petroleum and Mineral Resources; the other is Monroe “Jack” Rathbone ‘21, CEO and Chairman of Standard Oil.

His most recent book, The Quest: Energy, Security, and the Remaking of the Modern World, made it into Bill Gates’ Top Reads list for 2012, with the Microsoft founder saying that the book “changed his worldview.” The book, and the lecture at Lehigh, explored the recent changes in the global map of energy and how unexpected factors are driving these changes.

Yergin told the hundreds who attended the event in Baker Hall that the world is “living through a period of dramatic changes in energy” and that what’s happening in energy “has critical importance to the world economy and for geopolitics.”

That’s especially true in the realm of supply, he said, where shale gas has become “the biggest innovation in energy so far in this century.”

Yergin explained that what began just a decade ago as a new way to produce natural gas has now turned into an “unconventional revolution.” Basically, the U.S. went from “a position of scarcity to a position of abundance.”

This breakthrough has had a miraculous impact—and that impact is being felt in many ways.

“Five or six years ago, we were going to spend as a country $100 million a year to import Liquefied Natural Gas (LNG) because we were short of it. Now President Obama says we have a 100-year supply here in this country and we are getting ready to export it.” By 2015 or 2016, he said, the U.S. will be ready to export LNG, and by 2020 or 2021, the U.S. will be one of the world’s three largest exporters of LNG, along with Qatar and Australia, he says.

A welcome effect of this revolution has been what Yergin calls a “manufacturing renaissance” in the U.S. Since natural gas in the U.S. is one-third the cost of what it is in Europe and one-fifth of the cost in Asia, the U.S. has become “a very attractive place to manufacture in a way that was not the case three or four years ago.” This translates into a lot of new jobs in the U.S.: over 2 million jobs have been created in the U.S. and, in Pennsylvania alone, 103,000 jobs were added in 2012. By 2020, that number will increase to 220,000.

Of course, energy is not only a commodity. It can also be a weapon, explains Yergin. When Russia exports gas to Europe, it’s technically a commodity, though Yergin noted “there’s obviously no question that when Mr. Putin and his colleagues look at Ukraine, their natural gas exports are being used as a political tool to achieve Russian objectives.”

But, he adds, the reality of the U.S. as an energy exporter is already filtering into political thinking and will give “a new dimension to American influence in the world.”