The Power of Constancy 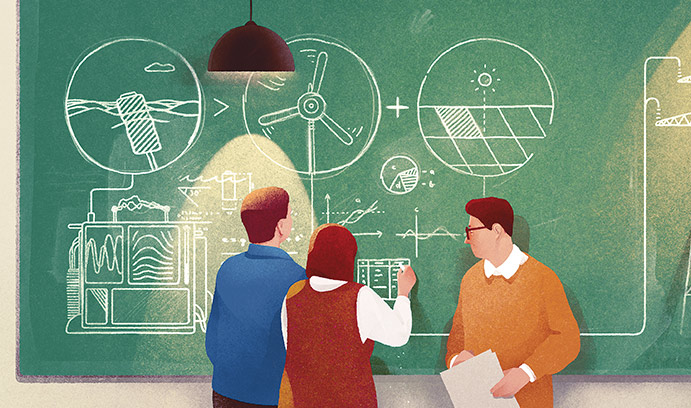 Four engineers and an economist seek to harness the abounding energy of the ocean's waves.

The world’s oceans exercise a timeless pull on the human imagination. The poet William Wordsworth called the ocean “a mighty harmonist.” The explorer Jacques Cousteau said the ocean, “once it casts its spell, holds one in its net of wonder forever.” Others have expressed awe at the ocean’s immensity, and the rich diversity of its plant and animal life.

Five faculty members at Lehigh value the ocean for one of its physical marvels: its constancy. These researchers—four engineers and an economist—believe the unending cadence of the ocean’s waves could provide a uniquely steady source of clean and renewable energy.

“Wave energy is a form of renewable energy that is hugely available and untapped,” says Shalinee Kishore, an associate professor of electrical and computer engineering. “It is much cleaner than energy generated from fossil fuel sources, and it is much more reliable and consistent than either wind or solar energy.”

A study by the Electrical Power Research Institute, says Kishore, estimates that the United States could meet more than a quarter of its energy needs by deploying wave energy converters (WECs), or buoys, in “wave farms” along coastlines. The buoys would convert the mechanical energy of rolling ocean waves into electrical energy that could be fed into the nation’s power grid.

Kishore is principal investigator for a grant of nearly $1 million that Lehigh’s PORT (Power from Ocean, Rivers and Tides) Lab recently received from the National Science Foundation (NSF) through its CyberSEES (Cyber-Innovation for Sustainability Science and Engineering) program.

The PORT group received two other grants last year: a $400,000 award from NSF’s GOALI (Grant Opportunities for Academic Liaison with Industry) program, for which Larry Snyder, associate professor of industrial and systems engineering, is principal investigator, and a $100,000 Accelerator Grant from Lehigh. The industrial partner in the GOALI project, Ocean Power Technologies of New Jersey, is conducting pilot experiments with its wave energy converter design in Europe and North America.

The chief advantage of wave energy over wind and solar and other renewable energy sources, say the PORT researchers, is its reliability.

“Studies show that it is possible to predict the statistical parameters of waves at 48-hour intervals into the future,” says Kishore. “This means that grid operators can factor the available energy from waves into their daily supply-and-demand planning. It also means that wave energy harvesters may be able to participate as energy suppliers in day-ahead electricity markets because they can guarantee the generation of a portion of the power that the grid will need.”

“If I offer a utility a megawatt of power at a relatively low price but with only a 20 percent chance of delivery, that’s an offer with great uncertainty,” says Lamadrid, who wrote his Ph.D. thesis at Cornell on pricing for markets with high penetrations of wind energy. “If I can always provide the energy I promise—and help distributors avoid a blackout—then I’m offering higher value.

“Wind forecasting can only be accurately done hour by hour. This creates huge uncertainty. With waves, you still have uncertainty but the spread is much smaller.”
Ocean waves have other advantages. They generate energy offshore, and more than half of Americans live within 50 miles of a coast. Wind power, generated largely in the country’s more sparsely settled interior, requires more miles of transmission lines to reach population centers.

or more in length can generate almost as much energy as a wind farm whose 140-foot turbines are perched atop towers that are 250 feet tall. The WECs, mostly submerged and located a mile or so offshore, will not be as unsightly as offshore wind farms standing within sight of the beach.

WECs could affect shipping routes and recreational ocean use, as well as marine life and sediment transfer along the ocean floor. But most environmental assessments, says Snyder, “have concluded these would be minimal impacts.”

A TEAM OF MANY TALENTS

Lehigh’s PORT researchers come from a variety of backgrounds. Kishore is an expert in signal processing and wireless systems. Snyder constructs mathematical models for energy systems and for the design and management of supply chains. He and Kishore have spent five years developing quantitative analysis models to optimize the positioning of buoys in wave farms.

Lamadrid studies the effects on electricity markets of introducing renewable resources, including wave power, into the grid. He, Kishore, Rick Blum and their students use neural networks, a type of artificial intelligence, to forecast the availability of wind and wave energy. They presented papers at the Institute of Electrical and Electronics Engineers 2014 Power and Energy Society meeting in Washington, D.C.

Arindam Banerjee, assistant professor of mechanical engineering and mechanics, has received federal funding to study the hydrodynamics of hydrokinetic turbines operating in rivers and tidal basins. He and his students have published numerous journal articles on river turbines. Blum, the Robert W. Wieseman Research Professor of Electrical Engineering, directs the Signal Processing and Communication Research Lab and has coauthored a book and published journal articles on sensors and image fusion.

All five researchers are members of Lehigh’s Integrated Networks for Electricity (INE) research cluster. The group also includes five Ph.D. candidates and a number of undergraduate students. NSF is providing funding for several undergrads to organize a course for high school students in June at the Bermuda Institute of Ocean Sciences (BIOS). The one-week course, which is being developed by Eccosolution, a renewable energy company, is the first that BIOS is devoting to wave energy.

To convert the ocean’s power into electric power that can be integrated into the grid, the PORT Lab researchers must solve myriad interconnected challenges. The first, says Banerjee, is to determine the best layout of the buoys in a wave farm.

“We envision a wave farm with hundreds of buoys spread across a few miles of the ocean,” says Banerjee. “The buoys should be far enough apart so that boats can navigate around them but not so far apart as to make it prohibitive to send crews out to perform maintenance.”

Inside a wave farm, buoys will interact with ocean waves and with each other. When a wave strikes a buoy, that buoy will generate a smaller, secondary wave that strikes a neighboring buoy, which will then generate its  own secondary wave. The interacting waves, says Snyder, will interfere with each other constructively or destructively. The goal is to deploy each buoy at a constructive interference point to maximize the energy it generates.

This interaction of primary and secondary waves, called hydrodynamic coupling, is affected by the angle and oscillation of approaching ocean waves; by the shape, size and mass of the buoys, and by the depth of the ocean floor. The phenomenon is poorly understood, says Banerjee, and the Lehigh group is developing mathematical models to study it.

“Not much is known yet about how buoys ‘cross talk’ or how to space buoys in a wave farm to get maximum energy generation,” says Banerjee. “To model this in a marine environment, we have to use time domain calculations, which are very expensive and numerically intensive, and then integrate these equations with wave state forecasting models.”

One way to influence hydrodynamic coupling and maximize power generation, says Kishore, is to modify the amount of wave energy a buoy absorbs and thus the amount of electrical power it generates. This process, called damping, can be optimized if scientists learn to forecast wave patterns. The Lehigh group is proposing to place sensors in wave farms to gather information on wave activity and make it possible to adapt and optimize the buoys’ reactions to waves.

“If we can predict how the waves are going to hit the buoys,” says Blum, “we believe we can get more energy from each device. Intuitively, we want the devices to move in sync with the waves; if they are already moving in the right direction when the waves hit, they will generate more energy.

“If we can use the wave predictions to control the WECs properly, we believe we can increase the energy we extract from the device at least by a factor of two. It takes just a small amount of energy to move a buoy into its optimal position. If the waves are out of sync with the WECs, however, this can substantially decrease the energy produced by the WECs.”

Sensors help predict wave formation and activity by measuring velocity, acceleration or displacement. Blum and his students are writing algorithms that determine the optimal locations for sensors while estimating and accounting for errors in measurements.

“The ocean is a volatile environment,” Blum says. “There’s a lot of noise that distorts measurements and causes inaccurate predictions. This noise includes sensor error and unwanted sensor motion. However, if you increase the number of sensors and properly combine all the data the sensors produce, you can reduce the amount of error that noise causes in your wave predictions.

“Our analyses estimate how many sensors a wave farm needs, at what locations, how often they should be monitored to get maximum energy extraction, and what degree of error there will be in predicting wave formations. How will this degree of error affect the efficiency of energy generation? That’s where we need better estimates.”
The more accurately wave farm operators predict wave activity, says Lamadrid, the more reliably they can guarantee the power they supply to the electrical grid. This could decrease the need for utilities to keep fossil fuel-fired power plants as backups when supply drops unexpectedly from a renewable source like wind or solar.
“If a utility has to maintain a coal-fired power plant as a standby, there’s a cost associated with that,” he says. “Also, it’s expensive to ramp up the plant. Someone has to incur the costs of these uncertainties.”

The PORT researchers analyze wind and wave energy, comparing their reliability and profits. One paper they presented at the Power and Energy Society meeting proposed an optimal strategy for wave farm operators to bid on the energy market. Another discussed how neural networks can be used to provide forecasts with 95 percent confidence.

“Like engineering,” says Lamadrid, “economics deals a lot with optimization. People, as consumers, try to maximize something, given restraints. We connect the economics of the energy market with the operations of an electrical power plant, which also tries to maximize profits. In fact, it can participate in the market under those premises—that it needs to maximize profits.”

Economics has been dubbed the “dismal science,” but the economics of energy, says Lamadrid, “is a very upbeat area. Renewable energy has a lot of potential. We can cut emissions of carbon dioxide and other pollutants. We can provide clean energy. The dismal part is establishing the tradeoffs on every action.

“Wave energy by itself is not going to be the solution to our energy problems. The ultimate solution will come from a diversified portfolio of options including wind, wave and solar. Combined, all of these will provide the right amount of energy and backup supplies so we can be more resilient when the next Hurricane Sandy hits.” 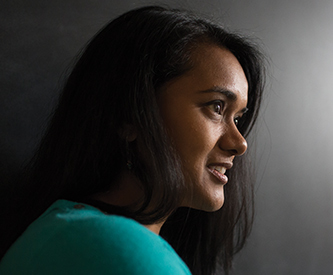 Shalinee Kishore, an associate professor of electrical and computer engineering, says wave energy is a form of renewable energy that is untapped,