The kids at Lehigh really inspire me

On an island in the middle of the cafeteria at Broughal Middle School, Darwin’s finches are being given a rare second chance in the daily scramble for survival.

When Mike McQuillan gives the word, eight students, each clutching a small, medium or large binder clip, take aim at two trays situated at each end of a long table.

Clustered inside each tray are today’s rations—small dried white beans, larger dried navy beans and a handful of even larger rubber balls.

The smaller beans are worth 10 calories apiece, the navy beans 50, the balls 100. The object is for each bird to consume its minimum daily calorie requirement by picking up as many beans or balls as it can, in 20 seconds, and releasing the food into a plastic cup.

For the students with small clips, or beaks, that means at least 60 calories. Those with medium-sized beaks must consume 200 calories and those with large beaks, 500.

When the 20 seconds are up, McQuillan, a Ph.D. candidate in evolutionary biology, tallies the results. Only one bird—a finch with a large beak—has lived to forage for food another day. But enough time remains in the 10-minute lesson for the students to try again. This time, three birds manage to survive.

The exercise was part of the first annual Bio Fair, which was organized and conducted at Broughal earlier this month by the Biology Organization of Graduate Students (BOGS).

Eight stations of games and activities

In groups of eight, 80 sixth-, seventh- and eighth-graders from Broughal visited each of the eight “stations” staffed by Lehigh students.

The 90-minute event, which was supported by a Lehigh Core Competency Grant, was the brainchild of Joe Brague, a Ph.D. candidate who studies the role of androgens in male sex behavior.

The goals of the event, said Brague, were to interest younger students in biology and to satisfy outreach requirements of the National Institutes of Health, the National Science Foundation and other funding agencies.

Matthew Vera, an eighth-grade honors student, said the Bio Fair helped reinforce many of the lessons he has learned in his science classes.

“I’ve always been interested in evolution,” Vera said. “I remember learning about Darwin’s finches. Events like this give you a refresher.”

“I want to be an engineer,” said Vera. “I think it would be fun to combine math and science. The kids at Lehigh really inspire me.”

“My students enjoy events like this,” said Lori Cirucci, science teacher at Broughal. “They’re already asking me, ‘When are we going to meet again with the Lehigh students?’”

Broughal principal Detrick McGriff echoed Cirucci’s comments. “The partnerships that we have with Lehigh,” he said, “add a great dimension to our curriculum.”

As Darwin’s finches tested their survival skills, students at the neural plasticity station handled Play-Doh and a much stiffer material while they learned about brain development from Kristin Anderson, a Ph.D. candidate in neuroscience.

Like every other trait in the body, Anderson said, brain plasticity is genetically controlled. Neuroscientists, she added, are studying the gene that controls this trait in an effort to find treatments for people with brain injuries or illnesses.

“It was fascinating to watch the kids’ faces light up when they saw what it is that we study,” said Anderson. “I was surprised at some of the questions they asked and the ideas they had.

“Our hope is that they will see that science is something they can do too.” 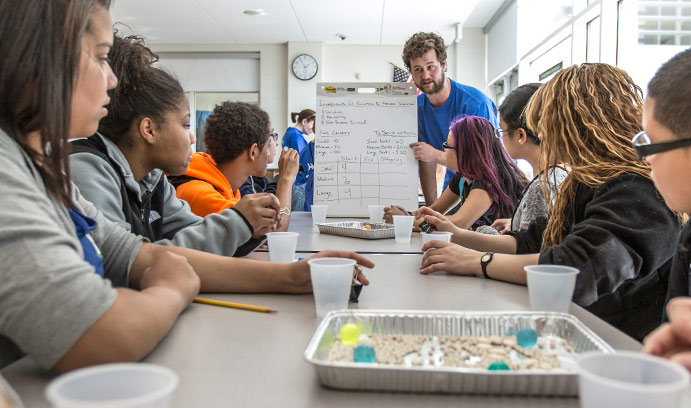 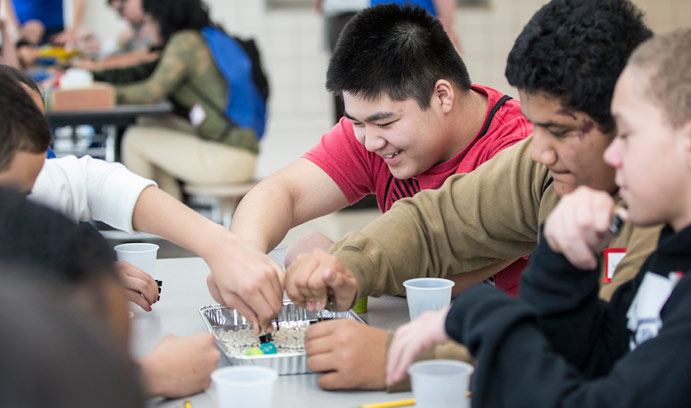 …and the students, acting on behalf of the finches Darwin studied on the Galapagos Islands, forage for their daily rations. 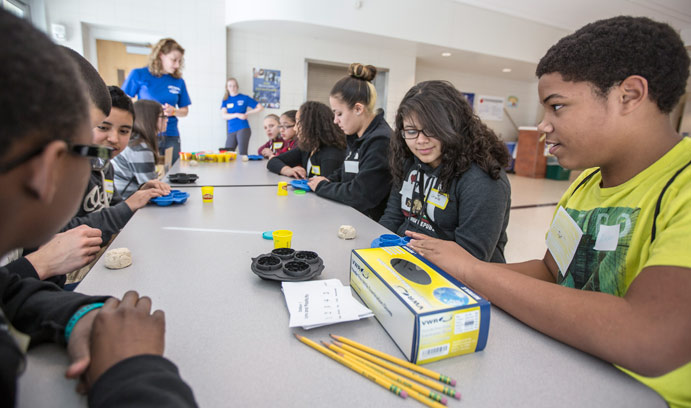 Kristin Anderson (background, left, blue shirt) entreats the students to learn as much as possible while they’re young and their brains are still plastic… 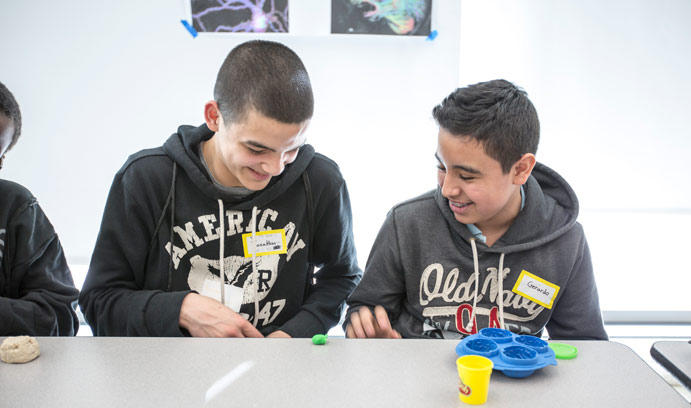 …and then allows the students to compare the texture of a young person’s brain versus that of an adult.