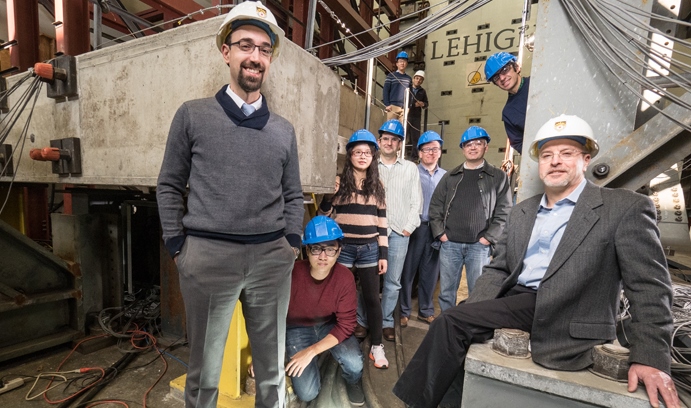 The 21st century is not yet two decades old but it has already witnessed some of history’s worst natural disasters. The 2004 tsunamis in the Indian Ocean, Hurricane Katrina in 2005, and the Tohoku Tsunami of 2011 are three examples. Each was a compound catastrophe. The Tohoku Tsunami was triggered by earthquakes, while Hurricanes Katrina and Sandy wreaked havoc with wind and floods.

These examples, say Lehigh researchers, illustrate the need for a new way of thinking about modern infrastructure. No longer is it sufficient to design structures—buildings, bridges, water treatment and power plants—that merely protect people’s lives during a disaster. Twenty-first century infrastructure must be resilient. Infrastructure systems—transportation and communications, the distribution of electrical power and potable water—must be able to withstand and recover rapidly from all natural and manmade hazards. Resilience must account for environmental impacts, energy use, economic events and the effects of climate change, while considering the performance of structures over their life expectancy (see sidebar, page 13).

The design of resilient infrastructure, says Richard Sause, director of Lehigh’s ATLSS Center (Advanced Technology for Large Structural Systems), requires contributions from scientists, engineers, policy-makers, data scientists and social scientists. It requires the imagination to anticipate all potential hazards and their consequences, and the ability to engineer robust systems to withstand and recover from them.

“Our approach to resilience,” says Sause, “attempts to consider all possible sources of hazard that can negatively affect the normal activities and long-term development of a community.

“In the past, we focused on natural hazards like earthquakes, hurricanes and floods, and manmade events like blasts and fires. But social, economic and political events, like the refugee crisis in Europe, can affect infrastructure systems.”

“The broader impact”
Paolo Bocchini, an assistant professor of civil and environmental engineering, sees infrastructure as an interdependent network of structures and systems, in which one system’s disaster recovery is often contingent on another’s. Bocchini’s group has an NSF grant to develop Probabilistic Resilience Assessment of Interdependent Systems (PRAISys), a platform that will predict disaster outcomes and develop strategies to enable structures to resume operating quickly.

James Ricles, the Bruce G. Johnston Professor of Structural Engineering, says the concept of resilient infrastructure is tied closely to the concept of community.

“Suppose an earthquake hits Los Angeles,” says Ricles, “and destroys the headquarters of a company with a worldwide market. The impact of the disruption can be very broad. One structure is important, but you have to integrate its performance with the goals and needs of the community so the functions and activities of the community itself are not disrupted.

“Engineers today have to expand the boundaries of community and look at the broader impact of a disaster.”

Ricles is principal investigator and director of the NSF-sponsored Natural Hazards Engineering Research Infrastructure Experimental Facility at Lehigh. NHERI supports research facilities at seven universities that evaluate the performance of engineering designs and materials.
Lehigh was chosen for the NHERI program because its ATLSS facilities enable researchers to conduct real-time, large-scale and multidirectional structural experiments that mimic the loads imposed on structures by natural disasters.

Researchers at ATLSS have also evaluated the resilience of structural designs by conducting hybrid simulation (HS) tests, which combine physical experiments with numerical analysis to incorporate an entire structural system into a simulation. These tests have also been performed at geographically distributed sites, in which the components of a simulation are located at different labs while data is transmitted via the Internet and interpreted in real time. Lehigh researchers conducted more than 1,800 hybrid tests from 2004-14 with support from NSF’s George E. Brown Jr. Network for Earthquake Engineering Simulation (NEES) program.

One NHERI goal, says Ricles, is to apply the lessons learned from studying structures’ resilience to earthquakes to their resilience to other disasters.

“We want to conduct real-time HS tests to improve structures’ resilience to tornadoes and hurricanes. Windstorms, in general, cause different loading from earthquakes. We’re collaborating with fluid mechanics experts to conduct HS tests with wind experiments.”

Another NHERI goal, says Ricles, is to open ATLSS’s testing facilities to outside researchers. “At one workshop, we conducted a real-time HS test of a three-story building with nonlinear viscous dampers under earthquake loading. We had 43 participants from across the U.S. They designed the building’s structural system, performed numerical modeling and set up the simulation algorithms. We plan to do this every year with updated capabilities.”

New guidelines for fire resistance
Blast and fire loads, says Spencer Quiel, an assistant professor of structural engineering, are typically more localized than those from earthquakes and severe winds. Blast and fire can also trigger a local failure that progresses into other portions of a structure. On Sept. 11, 2001, for example, following the impact of the two airliners, fires progressed through several floors of the World Trade Center towers, weakening their load-carrying capability and setting off a catastrophic “progressive” collapse.

Quiel has performed high-temperature experimental tests on steel strands used in bridge cables, with the goal of developing new input data for computer models of cable-supported bridges under fire.

“The high-temperature data for steel strands in suspension and cable-stayed bridges,” he says, “is 50 years old in many cases. Since these bridges were built, we have updated our standards for fabricating these cables. Our group has looked at two types of modern bridge cables to determine how they weaken when heated. The results will help us better model these structures under fire and mitigate the effects of this hazard.”

Recently, Quiel helped the American Society of Civil Engineers (ASCE) develop new guidelines for the design of structures that resist the effects of fire. This year, for the first time, ASCE will include fire-resistance guidelines as an appendix in its design load criteria for buildings.

In an NSF-funded project, Quiel and Ricles are seeking to make the cladding, or façade, of a building, more versatile to resist extreme loads. “We want to design cladding not just to protect the inside of a building from blast or wind,” says Quiel, “but also to allow it to interact with the structural system and provide better overall resistance to a variety of hazards.

“We’re designing a new connection between the structure and cladding to allow the latter to move and dissipate energy during an extreme event. We want to find out if it’s possible to reduce damage from an event by tuning the movement of the cladding relative to the rest of the structure.”

To improve the fire resistance of steel frame structures, engineers often coat the framework with spray-applied fire-resistive material (SFRM). This insulating material—if undamaged—impedes heat penetration into steel and prevents appreciable heat-induced mechanical degradation.
Pessiki’s group conducted large-scale simulated tests on SFRM in steel moment frame plastic hinge regions and in steel gravity frame beam-column connection regions. They found that the insulation is prone to cracking, debonding and spalling during seismic response. This can expose bare steel in the connections to extreme heat during a post-earthquake fire.

“Our research shows that the greatest concern may be the gravity connections,” says Pessiki. “These play a critical role in maintaining the load-bearing capacity and integrity of the floor system during fire exposure. Failure of the floor system can reduce the stability of gravity columns and increase the risk of fire spread.”

An envelope and a comb
Clay Naito, an associate professor of structural engineering, has helped ASCE write new design standards for buildings to resist loading from tsunami-borne debris like the 50,000-pound shipping containers that smashed Japan’s coast during the Tohoku Tsunami.

In a project funded by PITA and the Precast Concrete Institute, Naito and Quiel are designing and testing a prefabricated concrete structure that resists progressive collapse.

Naito also has an NSF grant to design and test an insulated, energy-efficient wall panel envelope system for building exteriors. The envelope is a sandwich with a plastic middle layer for greater thermal resistance. An innovative plastic “comb” improves blast resistance by tying together, or connecting, the concrete walls of a building.

Naito, who has a provisional patent on the tie comb, fabricates injection-molded prototypes of the comb in Lehigh’s 3D printing lab. His group has performed computational modeling and physical tests on the prototype and is planning full-scale blast tests of the wall panel.

“We’re trying to create wall panels that are more resilient, easier to assemble and more cost-effective than other methods while performing better during extreme hazards,” he says.

Ubiquitous, dynamic sensing
When a disaster occurs, Shamim Pakzad seeks to determine the location and severity of damage and the best way to allocate resources to repair and restore infrastructure. Automated accurate information, he says, plays a vital role in emergency response and recovery.

Pakzad, an associate professor of structural engineering, obtains information from countless thousands of mobile device users. As people drive over a bridge, for example, the gyroscopes, accelerometers, GPS and other sensors in their devices could transmit a steady stream of useful data to engineers. What are the orientation and acceleration of each vehicle? How is the bridge responding to vehicle loading? What are the temperature, wind speed and environmental conditions?

Pakzad, who has an NSF CAREER Award, has installed networks of wired (on the Washington Monument) and wireless sensors (on the Golden Gate Bridge) to monitor structural response. In the age of ubiquitous digital devices, however, these technologies are outdated.
“Fixed sensor networks,” he says, “have limitations. These include the cost of installation, maintenance and operation. Compare this to the sensors in mobile devices. The location they provide is almost continuous. You can pick a point almost anywhere on a bridge and analyze data from that point, interact with nearby points and build a sensor network wherever you want.

“Now, consider that thousands of smartphone users cross that bridge every day. We take all of their data and chart acceleration at certain points on the bridge. We get a lot more data from a lot more locations than you get from sensors that are installed physically.
“This gives us a dynamic sensing capability that is missing from a fixed sensor network. It makes this one of the first applications of crowdsourcing in structural engineering.”

Bacteria for a firmer foundation
Much of the damage caused by earthquakes in Alaska and Japan in 1964 was attributed to liquefaction, says Muhannad T. Suleiman. Three conditions—sandy soil, excessive water pressure in soil and earthquake loading—are necessary for liquefaction to occur, says Suleiman, an associate professor of geotechnical engineering.

“Soil naturally gains strength from the forces between soil particles,” he says, “but as water pressure builds up during an earthquake, water separates these particles and the soil loses its strength.

“Even if a structure is sound, liquefaction during an earthquake, as happened in Alaska and Japan in 1964, can cause buildings to tilt.”

Suleiman, who has two NSF grants, is testing several techniques for strengthening soil in a soil box that measures 2 cubic meters. One involves injecting bacteria into soil and into a porous concrete foundation to induce calcite precipitation.

“Bacteria create an environment for calcite to precipitate between soil particles and cement them together,” he says. “We inject calcium into the soil to precipitate calcite. The process happens naturally over a long period of time; we can engineer it to control the quality, quantity and rate of precipitation.”

“We observed an increase in foundation load-bearing capacity of two to four times in the permeable foundation injected with bacteria,” he says.

Suleiman’s group is one of a very few in the U.S. working in this field. 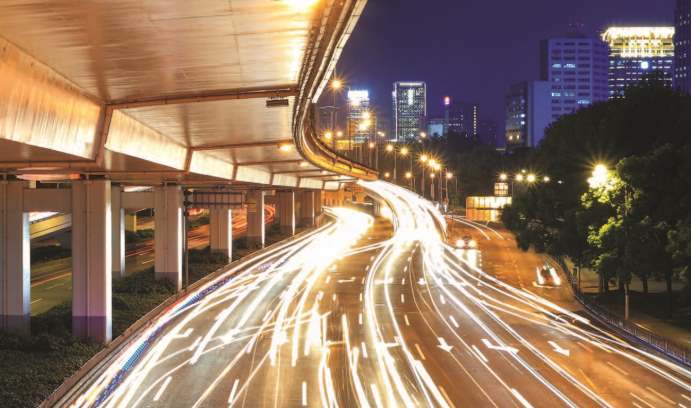 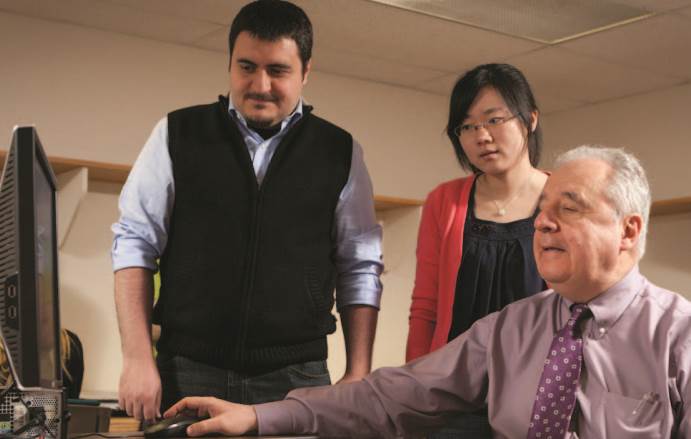 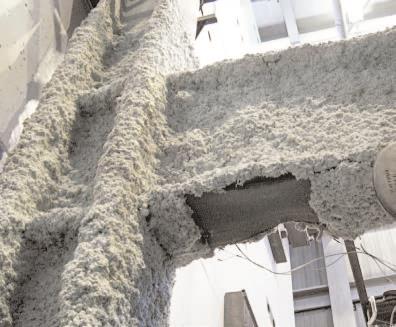 Insulation in a plastic hinge shows the effects of spalling from simulated earthquake loading. 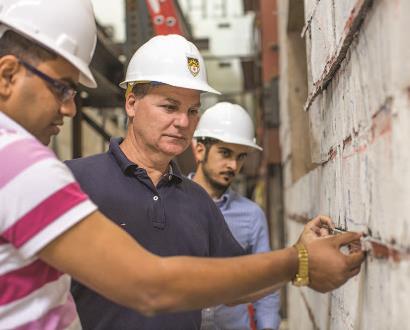