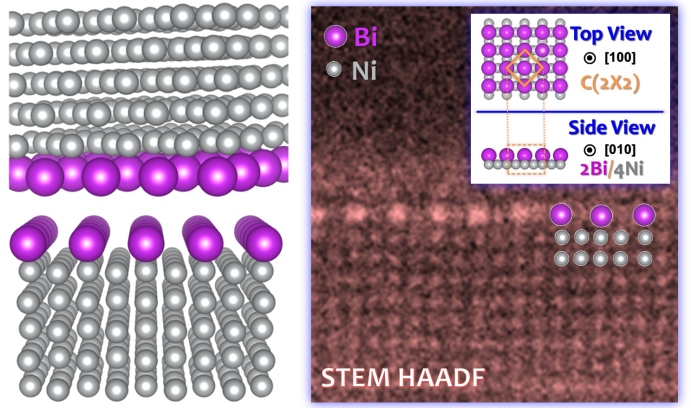 The discovery announced in Science by Harmer’s group sheds light on the atomic structures that form when atoms segregate at general grain boundaries, which are important in controlling many properties of polycrystalline alloys. (Image by Zhiyang Yu, Patrick R. Cantwell and Jian Luo)

Scientists in the United States and China have announced a discovery that they believe could enable the engineering of alloyed materials that are stronger and more ductile and possess superior electrical, magnetic and physical properties.

Writing in Science, the nation’s leading scientific journal, the researchers said they had found a surprising degree of order in the interior grain boundaries—the interfaces between crystalline grains—that determine the properties of polycrystalline materials such as metals and ceramics.

Special grain boundaries occur at a relatively small fraction of the internal interfaces of a material when adjoining lattices (the 3D arrangement of atoms inside a crystal) of individual grains join together with little mismatch and form a periodic or patterned superstructure.

General grain boundaries are more common and occur in the interior of a material when there is a large misfit between adjoining grains and no matching of the adjacent crystal lattices.

Using atomic-resolution electron microscopy and numerical calculations, Harmer and his colleagues have succeeded in characterizing 12 randomly chosen general grain boundaries in polycrystalline nickel doped with bismuth. The six-year project has been funded by the Office of Naval Research through its Multidisciplinary University Research Initiative (MURI).

The researchers found that bismuth atoms adsorbing, or segregating, at the general grain boundaries of nickel formed superstructures whose weak bismuth-bismuth bonds at critical junctures caused the alloy to become brittle.

“This discovery,” they wrote in Science, “shows that adsorbate-induced superstructures are not limited to special grain boundaries but may exist at a variety of general grain boundaries, and hence they can affect the performance of polycrystalline engineering alloys.”

“We believe that, for the first time, we have discovered superstructures at general grain boundaries in a metal alloy,” says Harmer. “Until now, this had been a very hidden phenomenon in metals.

“This breakthrough helps us understand why, in the case of nickel-bismuth, the alloy embrittles. But beyond that, there will potentially be superstructures in general grain boundaries which enhance a material’s performance, strength and ductility.

“The question is, to what extent can we engineer these superstructures in general grain boundaries and make new materials with desired properties?”

The Science paper is titled “Segregation-induced ordered superstructures at general grain boundaries in a Ni-Bi alloy.” The lead author, Zhiyang Yu, is a faculty member at Xiamen University of Technology in China and a former postdoctoral researcher at Lehigh.

The Concept of Complexions

Harmer has been studying grain boundaries for a large part of his career. In 2006, he and Shen J. Dillon ’02 ’07 Ph.D. identified six distinct grain-boundary “complexions,” or interphase structures, in the ceramic alumina.

The concept of complexions, says Harmer, proposes that grain boundaries transition from one state, or structure, to another as a function of temperature and composition and sometimes with dramatic changes in property. The concept is analogous to the way bulk structures change phases from gas to liquid to solid. Dillon, now an associate professor of materials science at the University of Illinois at Urbana-Champaign, used Lehigh’s aberration-corrected scanning transmission electron microscope (STEM) and observed the phenomenon directly for the first time.

The concept of grain boundary complexions has helped explain phenomena that have puzzled scientists for decades, says Harmer. These include the abnormal growth of a small number of grains in ceramics and the embrittlement of ductile alloys when exposed to a certain element, such as nickel-copper and bismuth. Harmer and Jian Luo coauthored an article titled “The Role of a Bilayer Interfacial Phase on Liquid Metal Embrittlement” for Science in 2011.

In the past decade, Harmer’s group has published several influential articles on complexions. Dillon was the lead author of “Complexion: A New Concept for Kinetic Engineering in Materials Science,” which appeared in 2007 in Acta Materialia, the leading journal for materials scientists and engineers. The article was coauthored with two highly regarded complexions theorists—W. Craig Carter of the Massachusetts Institute of Technology and Ming Tang of Rice University.

In 2011, Harmer published a perspective titled “The Phase Behavior of Interfaces” in Science, and in 2014, Cantwell was the first author of a highly cited overview titled “Grain Boundary Complexions,” which was published in Acta Materialia. That article was coauthored by Tang, Dillon, Luo, Rohrer and Harmer.

The current ONR-funded project represents a continuation of Harmer’s study of the nickel-bismuth alloy.

“When we looked at the liquid metal embrittlement of nickel-bismuth alloys under the aberration-corrected STEM,” says Harmer, “we were curious when we saw an amazing amount of periodicity to the structure of the bismuth atoms at general grain boundaries that we randomly selected.

“Zhiyang Yu, who is a very skilled electron microscopist, worked five years on this project and did a phenomenal job characterizing the structures of these periodic arrays of bismuth at the general grain boundaries.”

Because the electron microscope generates an extremely thin two-dimensional projection of a three-dimensional structure, says Harmer, one of the challenges facing Yu was to recreate the three-dimensionality of the specimen being observed. This required Yu to take thousands of images and piece them together to simulate the original 3D image. The group also relied on computational modeling performed by Widom and Gao of Carnegie Mellon University.

“Michael Widom and Qin Gao did calculations of the conditions under which the atomic structures [of the grain boundaries] become stable,” said Harmer, “and predicted the structures we would see. We matched their predictions with the experimental results. It turned out to be a great match.

“The most surprising result that came out of all this work was the discovery that these general random grain boundaries had a variety of superstructures. We’ve known for a long time that these superstructures in metal alloys develop on the free surfaces of crystals and that they have very interesting physical properties.

Harmer and his colleagues wrote in Science that the superstructures they found in general grain boundaries could play a role in the electronic, magnetic and other properties of materials.

“The discovery of bismuth segregation-induced superstructures at general grain boundaries greatly enriches our limited knowledge of the atomic structure of complexions,” the group wrote, “and may offer new insights into a spectrum of structure-related grain boundary properties such as plasticity, diffusivity and conductivity.

“We suggest that ordered grain boundary superstructures may indeed be a general, although not necessarily universal, feature of polycrystalline materials.”

Harmer likened the project to “a jigsaw puzzle with a million pieces.”

The payoff, he added, “will be huge.”

“Grain boundaries, whether special or general, dictate to a large degree the properties of the materials we use in the world,” said Harmer. “We’ve been studying grain boundaries for many years. Now, very sophisticated models and new tools are making it possible to see things in general grain boundaries that we couldn’t see 10 years ago.

“This is changing the way we think about materials and the way we engineer them.” 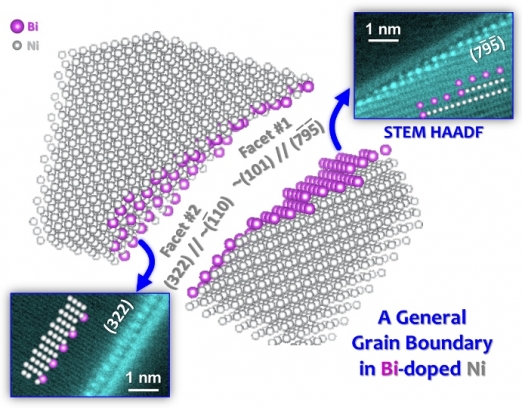 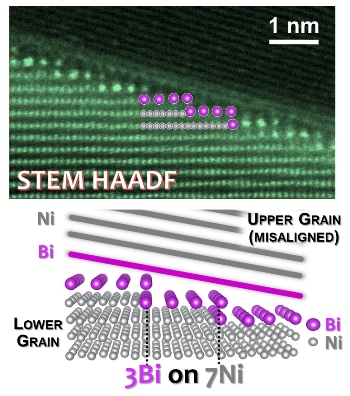