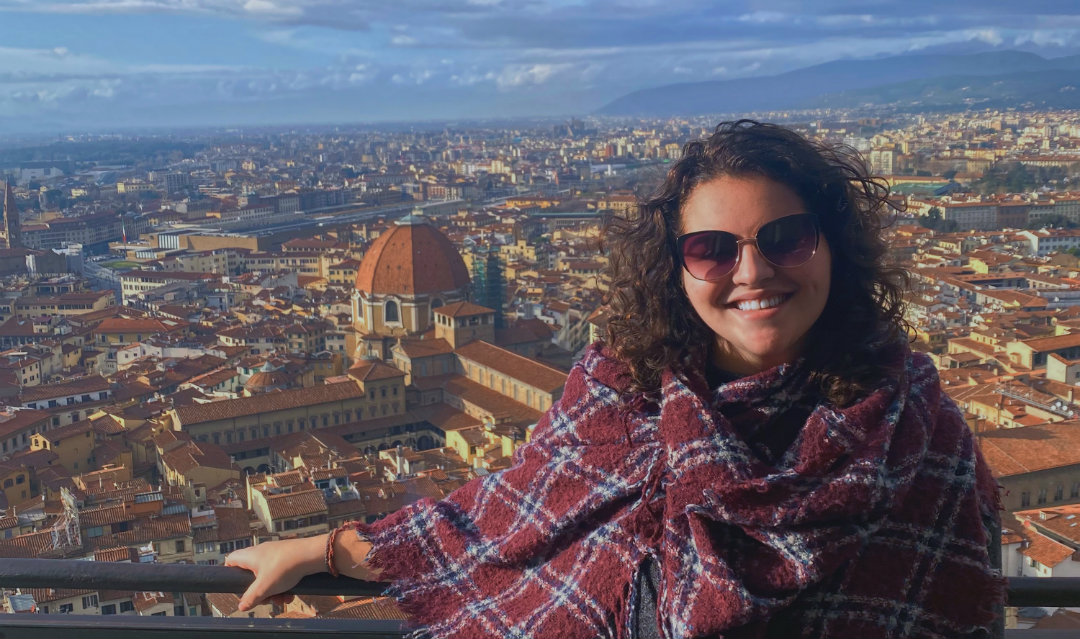 Natalie Maroun stands on top of the dome of the Cathedral of Santa Maria del Fiore in Florence, Italy during her study abroad experience. (Courtesy of Natalie Maroun)

Studying Abroad in Italy: How COVID-19 Changed Everything

Natalie Maroun ’21 recounts how the pandemic impacted her studies—and how Lehigh’s efforts helped her cope.

Natalie Maroun ’21 was enjoying a weekend in Switzerland in the midst of her study abroad experience in Florence, Italy, when she got a call from Lehigh’s Office of International Affairs: “You have until Thursday to come home.” 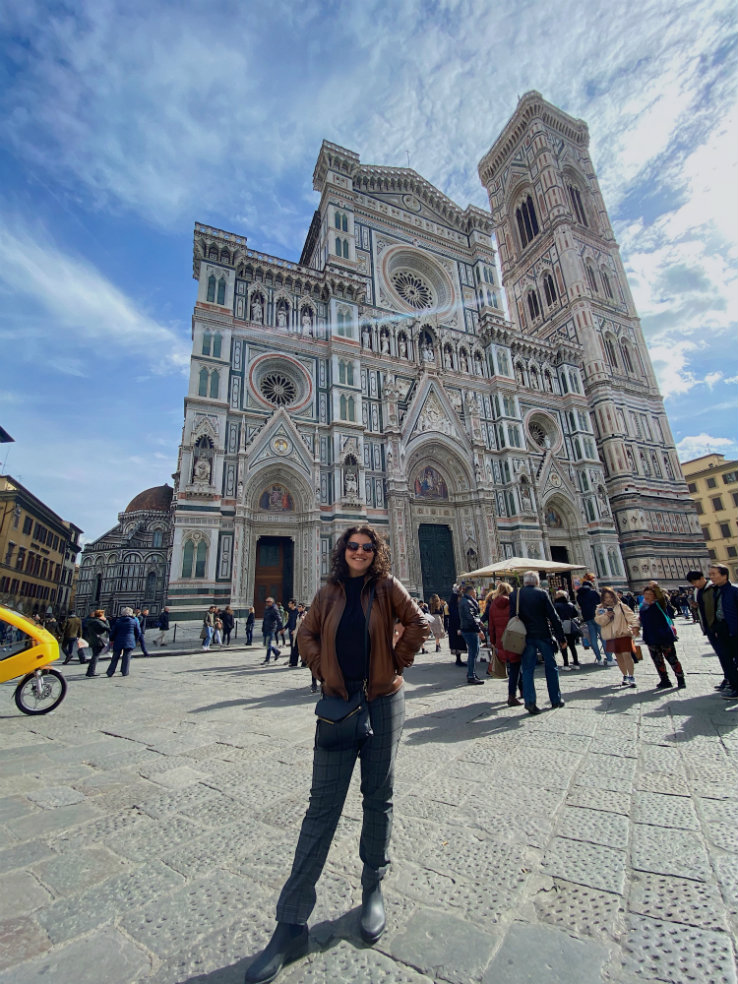 Natalie Maroun in front of the Cathedral of Santa Maria del Fiore in Florence, Italy. (Courtesy of Natalie Maroun)

The alarming number of COVID-19 cases in northern Italy had prompted Lehigh to make the decision. Initially, Lehigh told the 33 students studying in Italy on Feb. 25 that they could voluntarily return to their home countries. But Lehigh individually reached out to each student Feb. 29, directing them to return and offering aid in travel arrangements, as the U.S. State Department issued a “Level 4: Do Not Travel” advisory for Italy.

“It was hard enough, but when we had to actually tell students to return, that was really emotional for students,” Katie Radande, Lehigh’s director of study abroad, says. “We did our best to support them but some of them had been planning years to have this once-in-a-lifetime experience, and here we were having them come home.”

Radande says her office, along with Lehigh’s senior leadership, decided early on that the Centers for Disease Control and Prevention (CDC) travel advisory levels would help guide their decision making. If the CDC issued a Level 2 advisory for a country, Lehigh would allow students to return home voluntarily. Lehigh would direct students home if an advisory rose to Level 3.

“Throughout the whole Italy experience right up until we directed students home, we had some families and students who wanted to stay, [saying] that it wasn’t a big deal,” Radande says.

Other students, Radande says, thought they should have already been home and were asking why they weren’t being forced to evacuate.

“And so we were really trying to have a balance of giving people options and supporting them if they wanted to come home, and also supporting the students who wanted to stay,” Radande says. 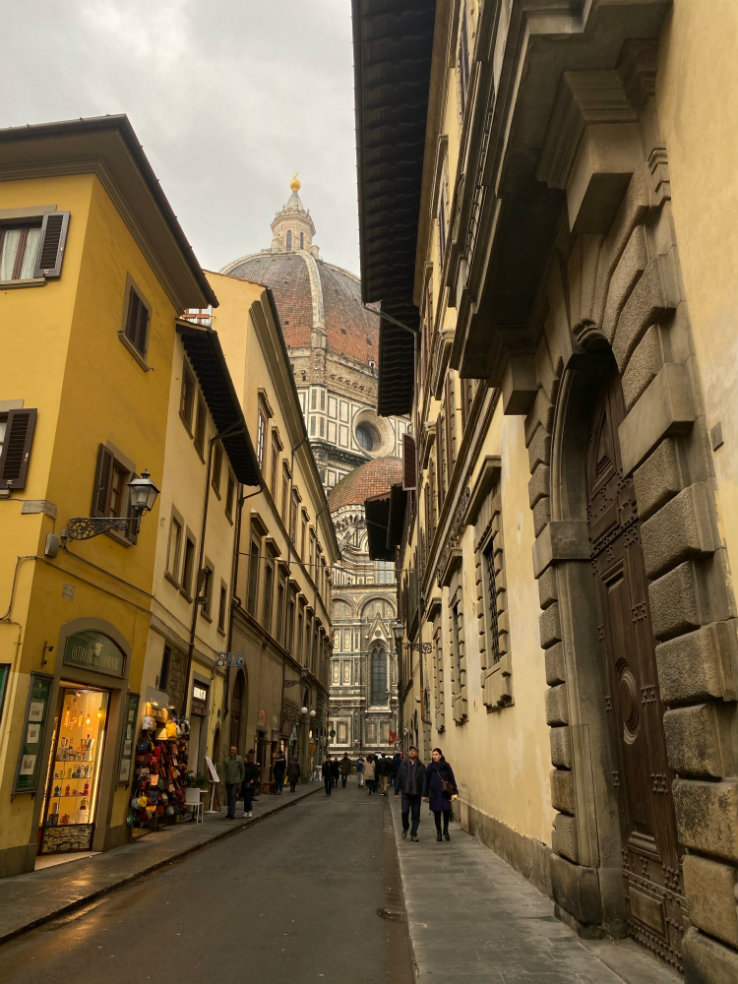 After receiving the Lehigh call on Saturday, Feb. 29, Maroun returned the next day, as scheduled, to Florence and was on a flight back to the United States by early Wednesday morning of that week. After navigating issues at airports in Florence and Munich, Germany, Maroun safely arrived home in Emmaus, Pa. to find Lehigh offering support through a new class: Dear COVID-19, which offers students a place to articulate their thoughts and feelings about their unique situation.

She enrolled, taking to social media to thank Lehigh for its efforts in helping her cope.

“It really centered on my own experience and what I was actually going through, along with learning about the generalities of what it's like to move to a new culture and experience something that you're not used to,” Maroun says.

Just five days prior to the Lehigh call, the news of a large number of cases of COVID-19 in the northern regions of Italy, specifically Lombardi and Veneto, had spread around the world, and American universities were beginning to cancel their programs in Italy. Florence doesn’t border any of the regions that first experienced the Italian outbreak, so for that moment, life had proceeded as normal for Maroun and her professors. 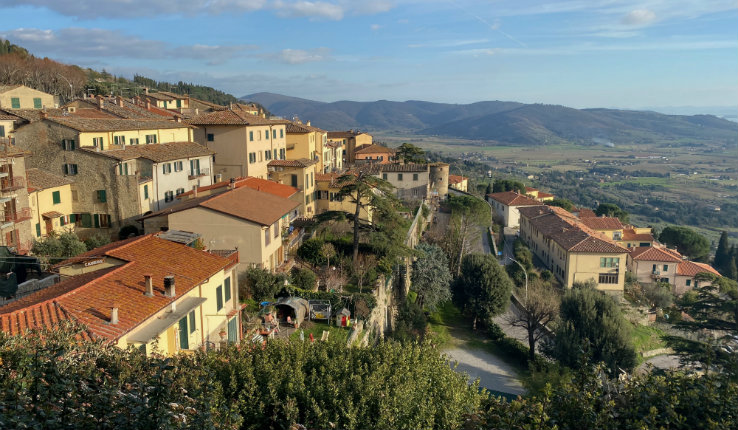 “When we were going to classes, our professors were like, ‘Oh, you're going to be fine. We don't think you guys are going to have to go home yet. This shouldn't be that big of a deal,’” Maroun says. “You would go to stores, especially the last few days we were there, and the Italian people would say, ‘Why are you leaving? There's nothing wrong, we're okay. Why are you going?’ They were really comfortable with everything as long as we took care of ourselves. There really wasn't much of a panic.”

Maroun lived next to a hospital and saw them setting up emergency tents as the Italian government asked everyone to take precautions and extra care of themselves. But those were the only signs of the growing pandemic, which, in a few days, would lead to officials locking down provinces just over an hour’s drive north from where Maroun was studying. As of April 7, Italy reported more than 135,000 COVID-19 cases with its death toll exceeding 17,000.

Yet, as the rest of the world watched, and the virus began to spread in the United States, all colleges shut down their study abroad programs in Italy. In the span of about six days, Maroun says, “Everything kind of like exploded.” One of Maroun’s housemates had already left the country before she returned from Switzerland. Maroun never had the chance to say goodbye.

Had Lehigh not proactively reached out, Maroun’s experience would have ended soon regardless. On March 2, the entire program through Study Abroad International was suspended and students were given 10 days to leave their host countries.

Departing Italy earlier than most still proved difficult for Maroun. She arrived at the airport in Florence 15 minutes prior to its 4 a.m. opening to find nearly 100 other students standing outside, waiting for the doors to be unlocked. She says the airport in Florence was not prepared for the chaos that ensued. Many, like Maroun, had to check extra baggage for the unexpected early departure. Maroun says she was left with extra luggage because her mother planned to visit later in the semester and take some of her belongings home. To make matters worse, the system used to accept credit card payment for the extra baggage crashed. Maroun didn’t even make it through security by the time her flight began boarding. 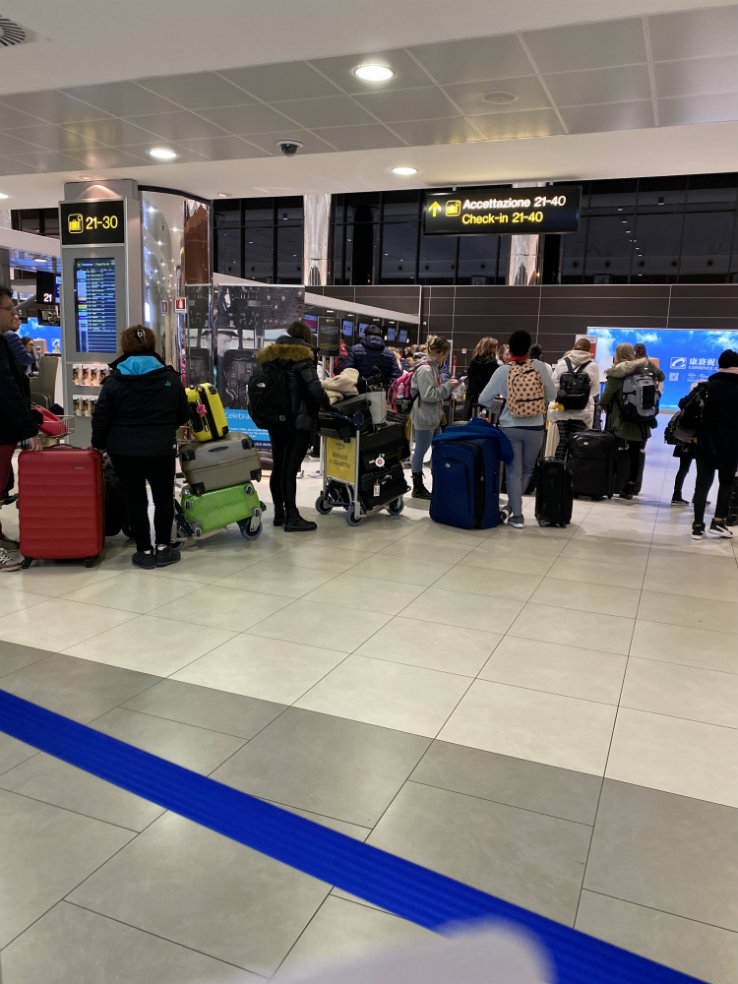 The line inside Florence's airport the morning of Natalie Maroun's flight back to the United States. (Natalie Maroun)

“It was 5:45 in the morning and all of these other random students are trying to get home, and everyone's just freaking out because no one knew what to do,” Maroun says.

Eventually the airlines waived the fees and Maroun made her flight with seconds to spare. She was one of the lucky ones, however, as she says more than 80 percent of her plane was empty. Those travelers missed their flight.

Her connecting flight in Munich presented additional obstacles, she said. What she estimates should have taken her 15 minutes to navigate to her departing gate took nearly an hour. The questioning at customs was more intense than usual. Maroun was repeatedly asked if she was positive she never visited certain locations. Once through customs, Maroun passed through four more checkpoints, where they checked her passport and temperature and asked how she felt. The first checkpoint, she estimates, was about 300 to 400 feet after customs. At this checkpoint passengers were separated into two lines: one for those who had been to Italy and another for those who had not.

She made her flight in Munich and with her mobile passport, was asked just two questions at customs in the Newark Liberty International Airport.

Maroun’s experience through Study Abroad International enrolled her at Florence University of the Arts, where she was in a cross cultural psychology program and taking classes such as art therapy, bibliotherapy, culture shock and social psychology.

“It really centered on my own experience and what I was actually going through, along with learning about the generalities of what it's like to move to a new culture and experience something that you're not used to,” Maroun says.

Her classes were held in the morning, Monday through Thursday, and she spent her spare time reaching out to, and working in, the community. On the weekends she sang with a church choir.

Now back in the United States, Maroun is continuing her Italian classes online. But in addition to her usual course load, Maroun added Lehigh’s new offering, Dear COVID-19.

The course was going to focus on the world’s events and economic issues. That didn’t interest Maroun, but a week later, when the rest of the study abroad students were pulled from their international locations, she received another email from Lehigh. With many more students now impacted, they were changing the content of the course being taught by Karen Rodriguez, director of Global Citizenship and professor of practice in global citizenship. 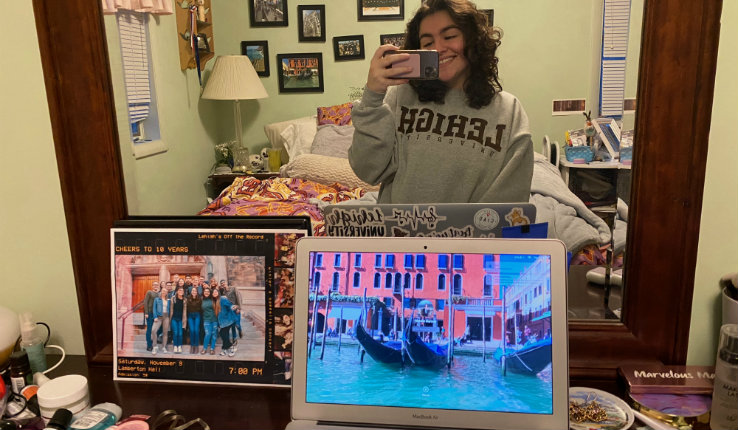 Natalie Maroun back in her Emmaus, Pa. home celebrating a Brown and White Friday while also remembering her study abroad trip with a photo from Italy as her desktop background. (Natalie Maroun)

In their first meeting, Maroun says Rodriquez discussed culture shock and what the students were experiencing in terms of an abrupt end to their study abroad experience versus the typical ending. Maroun says she didn’t get to say proper goodbyes and spent her last few days there trying to pick up gifts for families and getting to see sights and eat at restaurants she thought she would have a few more months to enjoy.

“[Rodriquez] talked about how that is going to affect us a lot and how it's okay to be upset and angry about it,” Maroun says. “She talked a lot about how it's OK for us to feel the way we feel, but to also make sure that we still look back on the experience as a good experience from what we were able to do.” 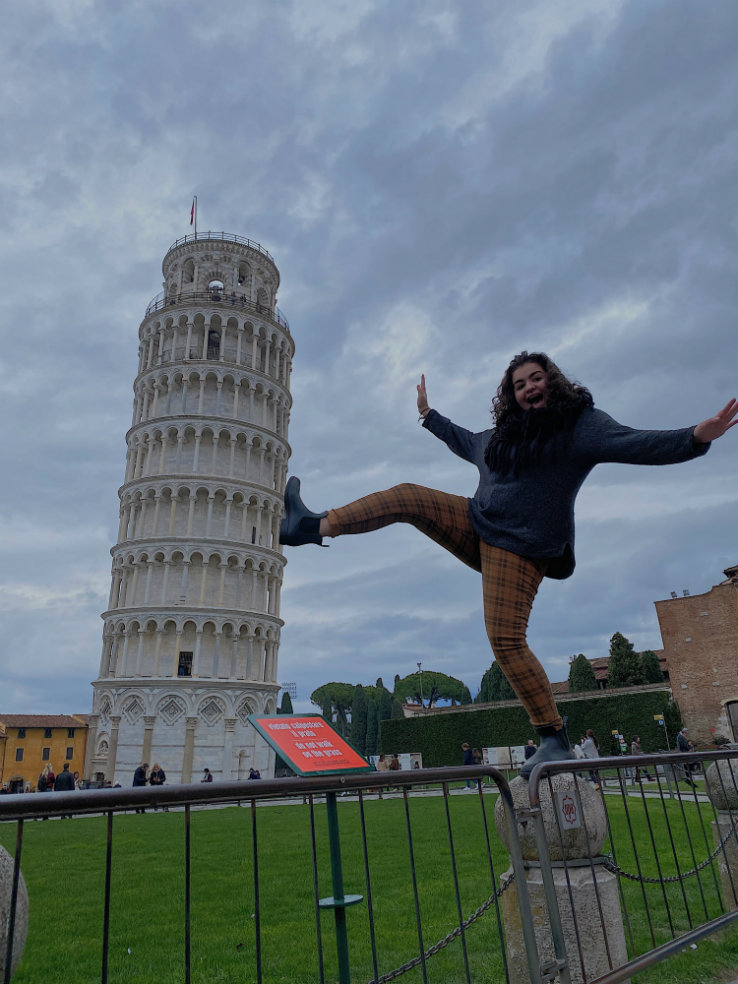 Students broke into small groups where they showed their favorite photos, identified their favorite class and spoke about something they were proud of doing while studying abroad. Half of the class, Maroun says, touched upon the negative aspects, while the other half focused on positive experiences. There are three assignments with the course. The first two ask students to write Dear COVID-19 letters, one dealing with their raw emotion and the other a more philosophical approach about what they’re learning about humanity and how they’re continuing their learning and connections. The final assignment is a personal project the student can define that connects them to a piece of their study abroad experience.

Maroun says she was so grateful for the “group therapy session.” To show her appreciation to Lehigh, and mindful of the angst that friends without similar support had felt, she posted a seven-message thread on Twitter sharing her thoughts and thanking the university.

“It wasn't something Lehigh had to do, but the fact that they did it, they exceeded my expectations for what was going to happen when I came home,” Maroun says. “All I thought that I was going to get was check-ins from the health center asking me how I was feeling and checking my temperature and all that stuff. To know that they put together something for us to make sure that we have the outlet, and the ability to cope with this, and deal with the situation was just something that they didn't have to do, but I'm so glad they did it.” 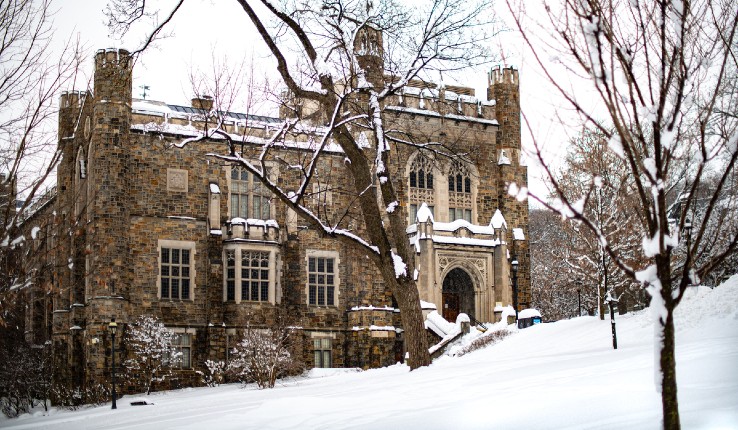 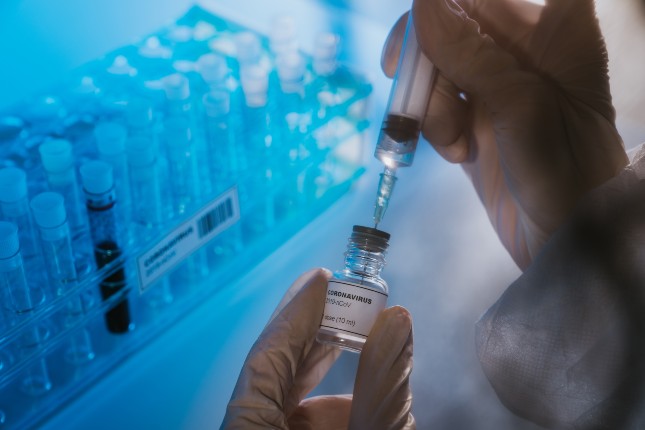 Forecast: 125,000 fewer U.S. COVID Deaths if Half the Population Initiates Vaccination by March 1