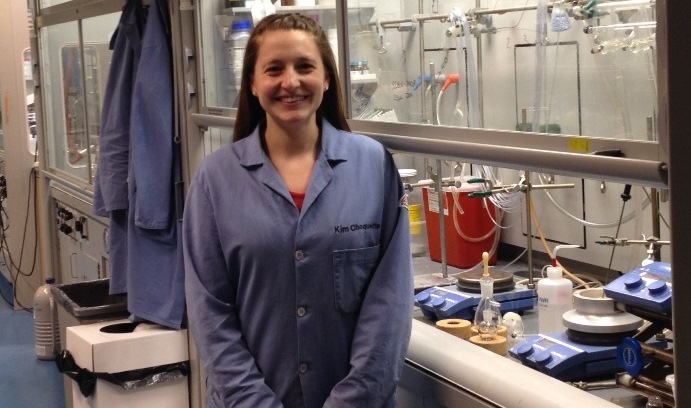 Kimberly Choquette ’13 Ph.D., now a postdoctoral scientist at Princeton, is designing a new reaction that she hopes will improve methods of synthesizing drugs.

Kimberly Choquette, who earned a Ph.D. in chemistry in 2013, thrived during her five years at Lehigh.

In the research group of Robert Flowers, department chair of chemistry, she became adept at using state-of-the-art instruments that monitor kinetics of reactions.

At meetings of her group and at the department’s seminar series, she improved her ability to explain her research. She gave presentations at two national conferences of the American Chemical Society. And she was one of about 50 U.S. students invited to the 2012 Graduate Research Symposium of ACS’s Division of Organic Chemistry.

Choquette’s diligence paid off recently when she received a fellowship from the National Institutes of Health (NIH) to support her research project at Princeton University, where she is a postdoctoral research scientist.

The two-year award will help her develop a new method of fluorinating organic molecules, a project she is undertaking with Abigail Doyle, assistant professor of chemistry at Princeton.

Medicinal chemists, says Choquette, have found that adding a fluorine atom to an organic drug molecule can have a significant effect on its potency. This impact often occurs because the fluorine atom changes the shape and reactivity of the drug molecule.

“About 20 percent of all new drugs coming through the pipeline contain one fluorination in the drug molecule,” says Choquette. “One of these is Lipitor [a cholesterol-lowering medication], which is commonly cited as a drug molecule that needs to contain a fluorine molecule in order to have the desired biological properties.

“I got involved in this area of research because I wanted to do more synthesis and become more proficient at making molecules and carrying out reactions that had never been done before.”

A drug’s properties and its behavior in the body, says Choquette, are influenced by the 3D shape of the drug molecule and the orientation of its functional groups. A key property is chirality, a type of asymmetry that occurs when two molecules are mirror images of each other—like a person’s left and right hand—but cannot be superimposed on each other.

Chiral forms of the same molecule can have vastly different properties, says Choquette. The morning sickness drug thalidomide, for example, caused severe birth defects in the 1960s, but chemists later discovered that a chiral form of the drug could be used to treat leprosy and other diseases.

“This example highlights the importance of determining how the 3D orientation of a molecule can affect its biological efficacy,” Choquette wrote in her proposal to NIH. “From a chemist’s point of view, having a synthetic strategy which selectively makes one chiral molecule over the other allows for a more efficient synthesis and eliminates the need for difficult techniques to separate the two chiral molecules at the end of a reaction.”

Choquette hopes to design a new reaction that achieves high chiral selectivity while asymmetrically fluorinating a diazo drug compound. Fluorine gas is toxic, explosive and highly reactive, so she is using potassium fluoride (KF), a nontoxic, mild and abundant salt, as the fluorine source. Because of its low reactivity, however, KF is still a little-used fluoride source, and no methods for selective chiral fluorination have yet been developed.

“Achieving asymmetric fluorination with KF,” Choquette wrote in her proposal, “would represent a major advance, enabling the synthesis of previously challenging or impossible-to-access fluorine-containing targets in medicinal chemistry and imaging of disease.”

In her initial laboratory experiments, Choquette says her group has been able to achieve “significant” control over the selectivity of their reaction by including chiral ligands in the catalyst. Ligands are small organic molecules that bind to the active metal substrate.

“We want to carry out the fluorination in one particular orientation on the drug molecule,” she says, “not a mixture of orientations. Our ligand system gives us this ability.”

To confirm her results, Choquette’s group uses nuclear magnetic resonance as well as gas chromatography, which allows the researchers to measure the quantity of each chiral molecule being formed.

“We can determine whether we’re forming one chiral molecule preferentially over another,” she says. “We’re experimenting now on smaller molecules. After we optimize our system, we’ll advance to medium-sized molecules.

In her Ph.D. work at Lehigh, Choquette studied the reactivity of samarium diiodide (SmI2), a single-electron reductant that is used in key carbon-carbon bond-forming reactions and as a reagent in cascade and sequential reactions that help synthesize complex natural products.

With Flowers and research scientist Dhandapani V. Sadasivam, Choquette wrote an article on the project that was published by the Journal of Visualized Experiments.

Choquette chose to enroll at Lehigh because of the relatively small size of its department (she was one of 10 students in her class) and the fact that many of the department’s faculty members were new.

“It seemed exciting,” says Choquette, “to be part of a growing department where the professors would know me even if I didn’t have a class with them.”

Two instruments in Lehigh's chemistry department that are not commonly found in universities proved particularly useful to Choquette’s research. A stopped-flow spectrometer enabled her to carry out kinetics for reactions that occur in less than one-tenth of a second. A reaction IR (infrared) instrument enabled her to do spectroscopy and monitor the kinetics of solutions.

Choquette credits the Lehigh chemistry department with preparing her well for her career.

“The Lehigh chemistry program makes sure that you acquire the necessary skills before you graduate. These include lab techniques, experience working with various instrumentation and, perhaps most importantly, opportunities to hone your presentation skills.

“All Ph.D. candidates are required in their second year to give a presentation to the entire department on their research at one of the department’s weekly seminars. And each research group in the department holds a weekly or biweekly meeting of its own where Ph.D. students make presentations.”

The department also prepares students to present at national conferences, where students can network with peers and faculty at other universities.

“This consistency is great,” says Choquette. “It’s very important to be able to communicate what you’re doing.”