Startup Founders Listed on Forbes '30 Under 30' 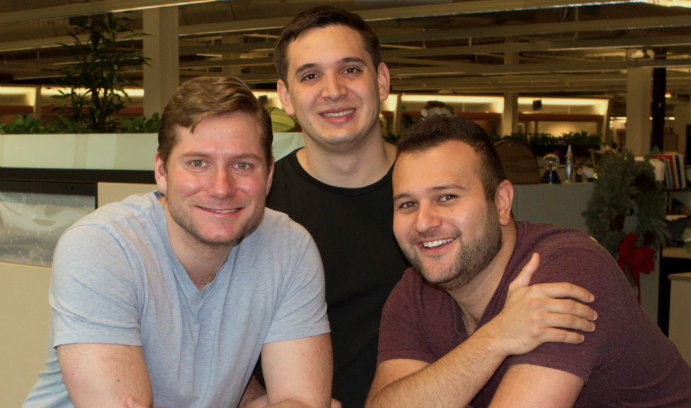 From left, Real Time Cases partners Andrew Pohle ’12, Jake Schaufeld ’15 and Jordan Levy ’14. The three were named to Forbes 30 Under 30: Education List for 2017 because of their concept that brings live business cases from top executives to the university classroom through a virtual digital format.  Photo: Tim Allen, RTC

Case studies give students a chance to solve problems that real companies face. However, in a fast-changing world, it can be hard to keep the business curriculum fresh and the questions relevant. Thanks to three Lehigh alumni, thousands of business students now have easier access to real cases provided by top companies, including KIND Healthy Snacks, CustomInk, and Uber, and are providing solutions to their executives.

Real Time Cases (RTC), co-founded by Jake Schaufeld ’15, Jordan Levy ’14 and Andrew Pohle ’12, provides current case material to the college classroom through a virtual digital format so students can gain more walk-on experience needed for jobs after graduation. Included in more than 100 undergraduate and graduate classrooms across the country and internationally, these real business cases simulate what it is like to be employed and receive actual assignments to solve from top-level management.

For this innovative educational concept, Schaufeld, Levy and Pohle have been named to the Forbes 30 Under 30: Education List for 2017. Real Time Cases has also been named as one of the top 50 start-up companies for 2017 by Startup Grind.

“Being recognized by Forbes brings a lot of credibility to what we are doing,” said Schaufeld, whose higher education clients include Wake Forest University, Syracuse, the University of Michigan, and Brigham Young University. “The honor is like being published in the academic world. It shows people care about real world and experiential learning. We are building educational material that is changing the way students develop the skills they need to solve real business challenges.”

Schaufeld, an earth and environmental science major, and Levy, a finance and accounting major, were entrepreneurship minors at Lehigh and partnered in their Entrepreneurship 312 class to develop Levy’s idea of using video to bring company executives into the classroom.

Live case learning is robust at Lehigh, but typically happens by inviting executives directly into the classroom. Levy, who prefers live case learning more than dated textbook-based material, wanted to use technology to expand that experience on a broader scale.

Schaufeld, who gained much of his business experience working part-time while in college as an analyst at SWaN and Legend Venture Partners, agreed, and the two quickly presented a business model to their professor, Joshua Ehrig, professor of practice in the department of management. Levy and Schaufeld began working on their first “real time” case to test market in spring 2014.

“Entrepreneurship 312 is a senior capstone course where we challenge students to actively develop their business model assumptions, validate these assumptions via customer discovery and initial minimal viable product development and execution,” said Ehrig. “Jake and Jordan were both very passionate about the problem they were solving and were able to make significant progress in a short-time period. I continue to be proud of their ambition and accomplishments as they progress with RTC.”

Tim Chi, CEO of WeddingWire, agreed to provide the first case for the budding entrepreneurs. Chi used his own webcam to videotape himself discussing his full-service national wedding planning business and posing questions about global expansion. He wanted to know which country would be a good fit for WeddingWire, and he was looking for suggestions on how to approach that market.

Schaufeld and Levy were given a chance to present the WeddingWire case to college students in business classes taught by Michael Santoro, professor of management at Lehigh, and James Maskulka, associate professor of marketing. Students studied the case which included print material about WeddingWire and provided feedback directly to Chi. According to Levy, it was he and Schaufeld’s first attempt at “taking the daunting nature of real professions with real challenges and serving it to students in a medium they understand.”

Upon the recommendation of Lisa Getzler, executive director of the Baker Institute for Entrepreneurship, Creativity & Innovation, the partners further developed their product the following summer as part of the Baker Institute’s student business incubator program at the Ben Franklin TechVentures facility. Levy focused on developing faculty relationships, and Schaufeld used his experience and professional network to interest top business executives in participating.

“Just by being surrounded by and exposed to so many startups paid great dividends for them,” said Getzler. “By virtue of the fact that they were located in a world-class incubator and were mentored closely by Dale Falcinelli, director of LehighSiliconValley, and Wayne Barz, manager of entrepreneurial programs, they were able to take their business to the next level."

The experience proved invaluable and by the end of the summer they were ready to further test their cases to see if they had a viable product.

“It was our first foray into what an incubator was and being part of an entrepreneurial ecosystem. I could not imagine another way to get where we are now,” said Levy. “What was really cool was the show of faith in us as entrepreneurs who had a minimum viable product and a vision.”

Levy graduated in August 2014 while Schaufeld continued as a full-time student, but the duo still tested their cases during the fall semester by providing their content free of charge to Lehigh professors in the College of Business and Economics.

By the end of 2014, they had 15 company partners and 45 available case studies and had tested cases at Georgetown University, Virginia Tech, and Lehigh. Students interacted with top executives who brought questions about topics such as business ethics, clientele opportunity, social media marketing, organizational behavior, and supply chain and logistics.

The Lehigh faculty members were their biggest challengers and pushed them to make their product better. Appreciative of their feedback, Schaufeld said, “I think the resources and support that we got from Lehigh has been amazing… especially as one of our first clients. Thank you so much to those professors who gave us a chance and were hard on us early on.”

Schaufeld added that Andrew Ward, associate dean of the College of Business and Economics, and Todd Watkins, who was founding director of the Baker Institute at the time and currently is
executive director of the Martindale Center, were also instrumental in advising their process.

Participating in the LehighSiliconValley program led by Falcinelli during winter break in January 2015, Schaufeld said the immersive experience into the real world of entrepreneurship helped “give me the push that I could actually pursue a start-up. It showed me a lot of things that I had to worry about and think about while building a business.”

While an underclassman at Lehigh, Levy met Andrew Pohle, a bioengineering major three years older than him, on a student trip to Israel. Remaining friends after Pohle graduated in 2012, Levy sought business advice from him while Pohle was working in his home state of Texas. Increasing his involvement with Real Time Cases, Pohle moved to Virginia and became the third partner, officially incorporating the company in February 2015.

Pohle immediately focused on the public-facing side of the business and the marketing, editorial, and web development of the company. Commenting that he has probably done every job possible at RTC, he created financial modeling and investment strategies, filmed and interviewed company executives, and wrote pitch decks, marketing material, case concepts, teaching method briefs for faculty and full company summary packets for students.

Recalling the original 60- to 80-hour work weeks, Pohle said, “Grit is absolutely one of the most vital traits that you can have when you start a business. But even more so, it is getting rid of your own ego. Doing things more for the good of the company, not your own good, is a very difficult skill to learn, but will benefit you more as an entrepreneur than any other skill you can adopt.”

In just a few years, the company has grown exponentially with 13 full-time employees and an expansion of in-house services which includes aggregating large forms of data to create easily digestible reports for companies. RTC has partnered with executives from more than 40 companies who are benefitting from creative, problem-solving solutions and who are getting to know promising young professionals who could be the perfect fit for their enterprises. Students are gaining the experience they need and are expanding their professional network.

Continually advancing RTC, Levy said of the team’s future, “We have a vision of creating an ecosystem where universities and their students can collaborate directly with companies through all different types of experiential learning activities.”

This story also appears in the Fall 2017 issue of Lehigh Business. 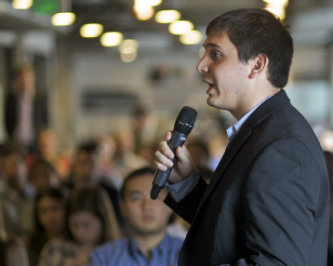 Participating in the LehighSiliconValley program while a student, Schaufeld said the immersive experience into the real world of entrepreneurship helped 'give me the push that I could actually pursue a start-up.'

“With these projects, we’re looking to move up the experiential learning pyramid by incorporating real company challenges directly into advanced degree curricula. We ultimately hope that these engagements will help students gain real professional work experience and develop the critical soft skills they need before they graduate,” said Levy.