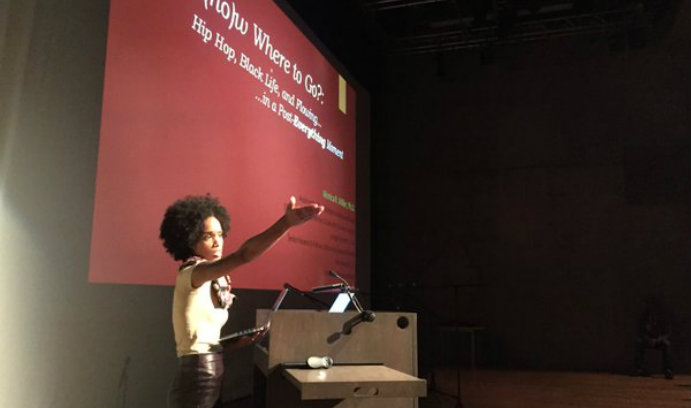 Monica Miller, assistant professor of religion studies and also of Africana studies and director of the Women, Gender, and Sexuality Studies program, gave a talk titled “K(no)w Where to Go?: Hip Hop, Black Life, and White Li(v)es in a Post-Civil Rights Era.”

Lehigh's Monica Miller and James Peterson participated in a historic event last month as keynote presenters at the first “Black Lives Matter” conference in the United Kingdom. They were joined on stage by Akala, a MOBO (Music of Black Origin) award-winning hip hop artist, poet, writer, educator, and social entrepreneur.

More than 200 attended the conference titled “Black Lives Matter: The Past, Present and Future of an International Movement for Rights and Justice,” which took place in recognition of the 50th anniversary of the UK Race Relations Act and the American Civil Rights Movement during Black History Month. It was co-hosted by the Centre for Research in Race and Rights (The University of Nottingham), Bright Ideas Nottingham, The Monitoring Group and Nottingham Contemporary and funded by the British Academy for the humanities and social sciences.

The event brought together academics and activists to analyze the Black Lives Matter movement, its origins, heritage, transatlantic dynamics and its future in the United Kingdom. Four panels interrogated Black Lives Matter as an intersectional, international, Civil Rights and Black Power movement. The talks and discussion by activists and researchers demonstrated that Black Lives Matter both draws from past social justice movements and is a new, global movement focused on race, class, gender and sexuality.

Miller, assistant professor of religion studies and also of Africana studies and director of the Women, Gender and Sexuality Studies program, gave a talk titled “K(no)w Where to Go?: Hip Hop, Black Life, and White Li(v)es in a Post-Civil Rights Era” which was motivated by W.E.B. DuBois’s poignant question 112 years ago: “How does it feel to be a problem?” Her presentation considered the manner in which both Black Lives Matter and hip hop culture recast “home,” using strategies and tactics of social protest  to “remake black history” and re-situate the “who” at the center of the “what.”

In his talk, “A Song, A Slogan, and A Service: Dispatches from the Movement for Black Lives,” Peterson, director of Africana studies and associate professor of English, provided updates and insights on the U.S. Black Lives Matter movement. That included the adoption of Kendrick Lamar’s “Alright” as an anthem, the challenge of pursuing equal justice for women and members of the LGBTQ community, looking at “#SayHerName” as a movement within the movement that is challenging the blind spots of contemporary efforts and strategies of black social protest and movements for justice.

At a recent talk at Lehigh co-hosted by Africana Studies and Women, Gender, and Sexuality Studies to discuss “Race and Rights," Zoe Trodd, the founding co-executive director of Nottingham’s Centre for Research in Race and Rights and professor of American literature, noted the lack of black representation in UK academia, at 0.4 percent. There are only 85 black professors in all of the United Kingdom, of which 17 are black women.

They discussed the current Black Lives Matter movement in the United States, exploring how mainstream American media has portrayed the social protest movement. In particular, they examined how social media has transformed social protest strategies among marginalized communities of color, giving rise to both possibilities and misuses in its adoption as a protest platform. 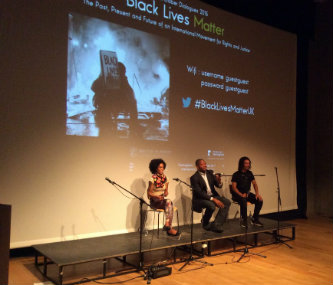 Miller, left, and James Peterson, director of Africana studies and associate professor of English, were joined on stage by hip hop artist Akala. 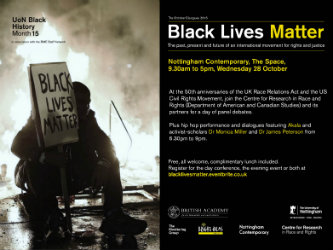 The first “Black Lives Matter” conference in the United Kingdom explores the origins of the movement and its future in the UK.