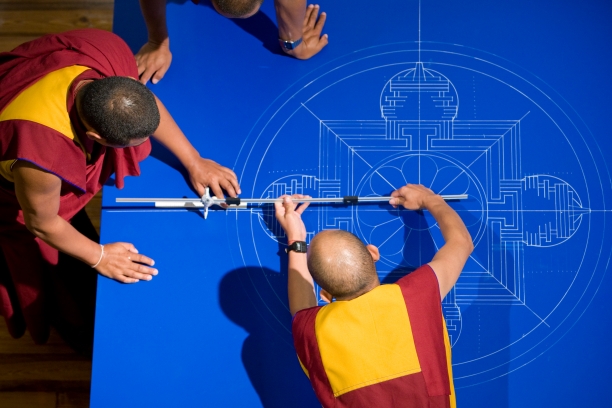 The steady stream of spectators stood in silence, occasionally sharing a whispered comment to one another as they watched the monks of the Namgyal Monastery Institute of Buddhist Studies at work.

Accompanied only by recorded Tibetan Buddhist chants and the clinking of their metal rasps that funneled the sand onto the pattern, the four monks took turns sitting cross-legged on a blue wooden platform and performing the painstaking work of properly arranging millions of grains of colored sand.

Above them, sunlight poured through the stained glass ceiling of the Linderman Library rotunda Monday morning, mirroring the circular pattern of the sand mandala that will be slowly filled in over a period of several days, and then immediately dismantled to illustrate the impermanence of life.

For a live webcam of the monks building the sand mandala, please visit Watch the Mandala creation live.

I was just coming in here to do some studying, and I see this,” said Andrew Woodward ’11, a mechanical engineering major from Chatham, N.J.

“It’s fascinating to me because it brings to life what was in the book we read this summer,” he added, referring to the summer reading selection for first-year students, the Dalai Lama autobiography, Freedom in Exile. “Then I walk in here and see this. The fact that this is happening here at Lehigh is pretty cool.”

The creation of the sand mandala by the monks—who have created similiar exhibitions for museums and galleries throughout the world—is part of the lead-up to the Dalai Lama’s historic visit to Lehigh in July 2008. At that time, the spiritual and temporal leader of Tibet will present a series of teachings sponsored by the Tibetan Buddhist Learning Center in Washington, N.J., in collaboration with the university.

Lloyd Steffen, the university chaplain and professor of religion studies who is helping to plan educational programming leading up to visit, characterizes the creation of the mandala as a rare cultural experience.

“It’s an amazing opportunity to incorporate Tibetan Buddhism and Tibetan art,” Steffen says. “The mandala represents a Buddha’s palace, a perfected abode where a Buddha is surrounded by other Buddhas, gods and goddesses, and protectors guard the doorways. In Tibetan Buddhism, initiates who confront the mandala are supposed to visualize themselves as the central Buddha in a specifically Tibetan religious practice or yoga.”

The effort, he says, is to look within oneself rather than use the mandala to achieve some altered state of mind.

“Perhaps some of our students will imagine themselves inside a Buddha’s palace, but even if that does not happen, the beauty of this intricate art form cannot fail to astonish and provoke awe.”

Karen Oren ’10 and Justin Christenson ’10 were meeting in Linderman Library to review an assignment when they saw the sand mandala in progress. Both mechanical engineering majors, they were fascinated by the discipline and precision involved.

“It’s phenomenal,” Oren said. “I’ve never seen anything like it. Their level of focus is amazing.”

Added Christensen: “I’m kind of awed by their patience and diligence. The way that they fashioned this tool and how they vibrate it to have this constant flow of sand come out of the tiny hole in such a precise way … it’s really cool to watch.”

For some of those observing the monks, the notion of spending long hours to produce a rare work of beauty and not preserve it for posterity was puzzling.

But, explains psychology professor emeritus Bill Newman, the process of creating the sand mandala expresses core principles of Buddhist teaching that everything is transitory and that change is to be embraced, not resisted.

“This reinforces that statement,” says Newman, who will be teaching two first-year seminars next semester on Buddhism, Daoism and Tai Chi. “It asks us to rethink that whole business of holding onto something, since it’s only a question of time before it goes away.”

Working nearly seven hours each day, the monks will complete the sand mandala Friday morning. A dismantling ceremony will take place and the sands will be transported to the Lehigh River, where they will be cast into a flowing body of water to disseminate the deity’s blessings into the world.

Until that point, it’s likely that the event will continue to draw significant interest.

“Now that I know it’s here,” says Woodward, “I’ll definitely be coming back to see how it progresses over the next few days.” 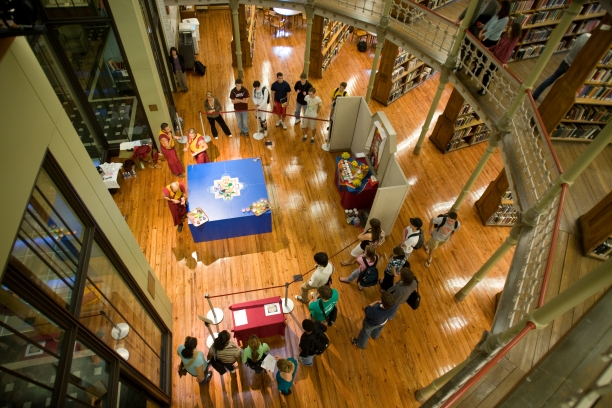