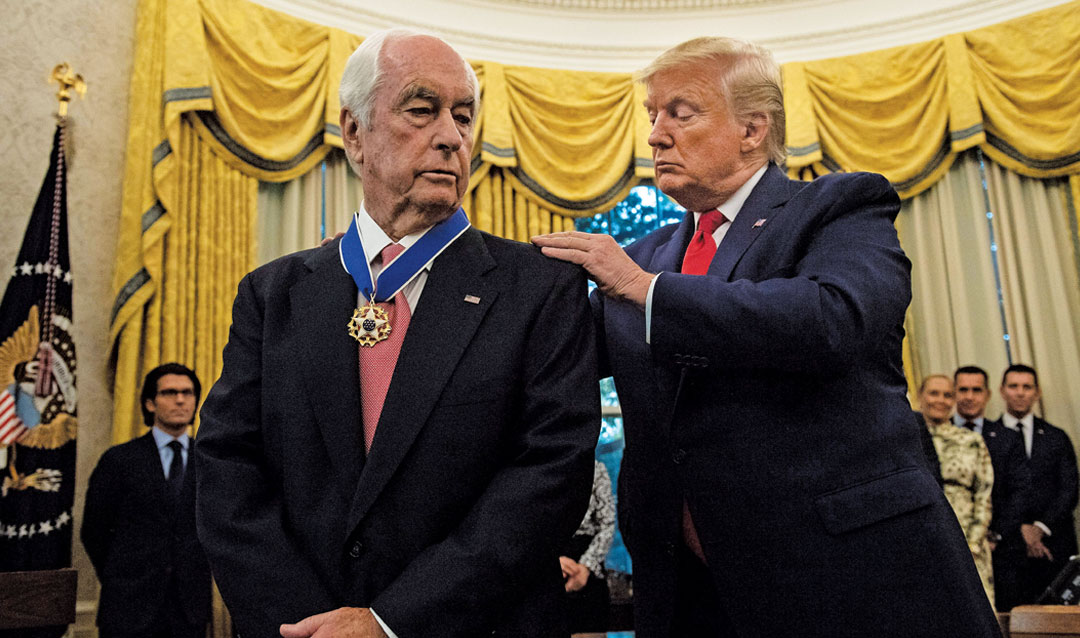 Penske, a member of Lehigh’s Class of 1959, built a car dealership into Penske Corporation and Team Penske.

Penske studied business administration at Lehigh before dedicating his professional life to his passion for cars and motorsports and to building Penske Corporation and Team Penske.

In a ceremony at the White House, Trump lauded Penske for his successes in business and on the racetrack, as well as his philanthropy, saying Penske has moved “from one great victory to another.”

“You’re a very unique person and truly a great champion and truly a winner,” Trump said. “No matter what you do, it turns to gold. You are a legend in the speedway and you’re a legend in business, and your name is revered everywhere the checkered flag flies and beyond that.”

A former professional auto racer, Penske was named the Sports Car Club of America Driver of the Year by Sports Illustrated in 1961. However, rather than attempt to qualify for the Indianapolis 500 in 1965, he decided to focus on the Chevrolet dealership he had purchased with a loan from his father. He started the race team a year later, and it  became one of the most successful teams in the IndyCar Series and NASCAR racing.

Penske received the Medal of Freedom award at a ceremony attended by his wife, Kathy, his five children and their spouses, his brother and his wife.

“It’s a wonderful honor to receive this award,” Penske said. "It's amazing to be here today. ...

“You know, many years ago, my mother and father invested in me and told me the love and passion of our great country,” he said. “And to think that I’m standing here today in the Oval Office with the President and the Vice President, and all of you here today, and especially my family, to receive this wonderful award, it’s just hard to believe that that would happen.

“As we all know, people make a team and people make power.  And I think the great thing, and I’ve had the opportunities to do, is to surround me with the talented individuals in my business.  And we built Penske Corporation over many years, and to see the success is really due to our people.”

Established in 1963, the Medal of Freedom is awarded by the President to those who have made especially meritorious contributions to the security or national interests of the United States, to world peace, or to cultural or other significant public or private endeavors.