Richard Verma '90: A 'Most Consequential Envoy' 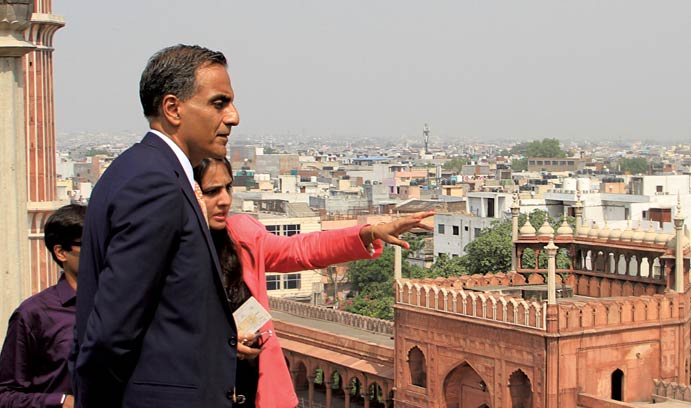 “India and the United States are natural allies,” says Verma. “Between our two countries, we have 1.6 billion people living in democratic systems with open and transparent governments that have checks and balances and believe in the rule of law and in resolving disputes peacefully.

“A positive ripple effect occurs whenever India and the U.S. come together. This is good for people everywhere who care about peace, open markets and prosperity.”

Few people have worked as hard as Verma to bring the U.S. and India closer together. From 2015 to 2017, Verma served as U.S. ambassador to India. In that time, the two nations launched more than 100 new initiatives in areas including clean energy, health, transportation and space exploration. Verma managed nine face-to-face meetings and three full-scale summits between former U.S. President Barack Obama and Indian Prime Minister Narendra Modi.

“Verma established himself as one of the most consequential envoys ever to occupy the prestigious post,” Forbes magazine said. “He presided over the two most transformational years in the U.S.-India strategic partnership … and raised the partnership to unparalleled heights in virtually every arena of bilateral cooperation while serving as a skilled and talented public diplomat.”

The Indian Express, which publishes newspapers in a dozen cities, said Verma “saw a fresh momentum in ties during his term. ... There have been some substantive outcomes. This is particularly true for defense, where India was granted major defense partner status, and New Delhi … signed the Logistics Exchange Memorandum of Agreement with the U.S., which will allow their militaries to work closely and use each other’s bases.”

For his own part, Verma says that relations between India and the U.S. progressed “at a pace that was somewhat unprecedented.” Foreign investment by the U.S. in India set a record as did two-way trade, which reached $110 billion a year. The number of American companies doing business in India topped 500, and a record number of Indian college students were issued visas to study in the U.S.

Military ties grew stronger as well. Defense sales exceeded $15 billion for the first time. India conducted more joint military exercises with the U.S. than with any other country, and the U.S. officially designated India a “Major Defense Partner.”

Verma, who earned a B.S. in industrial engineering with a minor in international relations from Lehigh, was appointed to the ambassadorship by Obama. He resigned in January at the request of incoming President Donald Trump but continues to play a leading role in U.S.-India relations.

In March, Verma was named a Centennial Fellow at Georgetown University’s Walsh School of Foreign Service, where he is promoting Georgetown’s India Initiative. In July, Verma joined The Asia Group, a Washington, D.C.-based strategy and capital advisory group, as vice chairman and partner and leader of the group’s growing presence in South Asia.

Verma is also co-chair of the U.S.-India Task Force of the Center for American Progress.