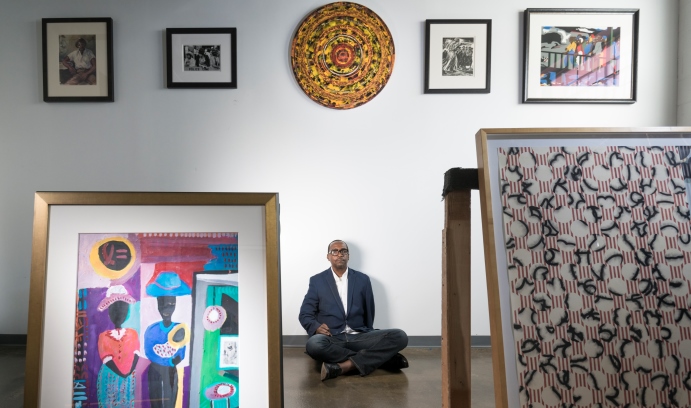 Berrisford Boothe, associate professor of art, was previewing his first major art auction when he struck tarnished gold—a portfolio of prints by African-American artists. Worried their value had been diluted by moisture damage and ink-transfer staining, he placed a call to his auction lifeline.

Lewis Tanner Moore, a respected curator, assured Boothe the stained prints could be restored. He also told Boothe that he couldn't afford not to bid on the portfolio.

Boothe bought the portfolio, had the stained prints conserved and added them to the nearly 200 works by African-American artists that he and benefactor Jim Petrucci, a property developer, have collected.

In the past three years, Boothe and Petrucci have assembled a diverse, balanced group of art objects. Last year, the Petrucci Family Foundation collection was exhibited at three institutions, including the African American Museum in Philadelphia. A fourth exhibit is set for November in Portland, Oregon.

The Petrucci collection is an educational, ethical mission by a white man from New Jersey and a black man from Jamaica.

"We're using themes inside the African-American experience to foster cross-cultural understanding and reconciliation," says Boothe. "We're prompting people to ask: How can we protect these cultural assets? Who else did our common history forget?"

To help him invest wisely, Petrucci turned to Boothe. For 30 years, Boothe has been an abstract painter, a realist printmaker, an abstract/realist photographer, an installation artist and a collaborator with improvisational musicians. He's taught African-American art and co-founded Lehigh's Africana Studies program.

Boothe has built a collection revolving around African-American identity and history. Hale Woodruff's "Coming Home," a Cubist/realist linoleum cut, represents a return to the American South from 1920s Paris, where expatriate black artists co-existed with Picasso and other Cubists. Calvin Burnett's ink drawing "Man Shortage" depicts women dancing while men are off fighting World War II. Kara Walker's silhouette of a black woman is shouldering a larger silhouette of a white grande dame.

Boothe guided Petrucci during a 2014 sale at Swann Auction Galleries in Manhattan. Petrucci paid nearly double the top estimate for "Wandering Boy," Dox Thrash's 1940 watercolor of a muscular young man in a white hat and shirt, sitting with a pensive, powerful gaze.

Petrucci paid an auction record for a Thrash watercolor because he believes "Wandering Boy" has a high emotional value. He plans to use the portrait as an inspirational visual model for annual tributes he underwrites for football players and top students at a troubled high school in Irvington, N.J.

Petrucci and Boothe insist their friendship has never been threatened by debates over finances or personal tastes.

"We're very forthright with one another," says Petrucci. "Berris suffers no fools, which I appreciate."

Boothe has driven tens of thousands of miles to visit auction houses, galleries, museums, studios and dealers' homes. This year, on sabbatical, he is spending more time making art and building an audience for his art. At the same time, he is helping young professionals archive the careers and lives of established, elderly, overlooked black artists.

"We're dealing with a country with a massive trove of negative imagery of African-Americans," says Boothe. "We don't want to collect pretty pictures that whitewash black life. We want to collect masterworks that define humanity, that show characters in their full, most authentic human moments." 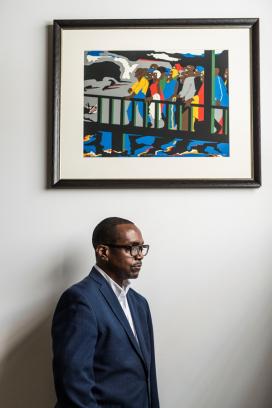 Boothe, the co-founder of Lehigh's Africana Studies program, is an abstract painter, printmaker and photographer in his own right. Photo: Ryan Hulvat