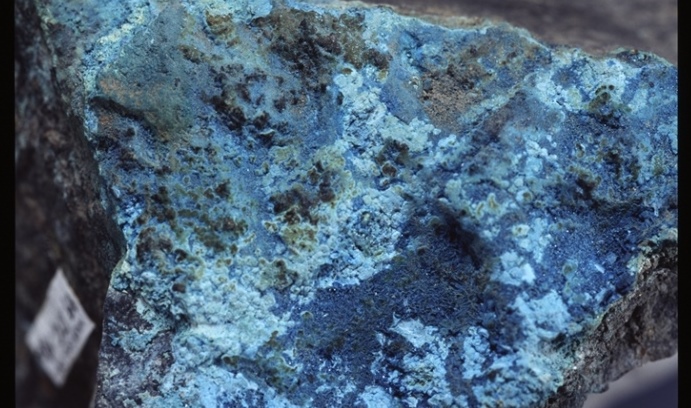 Georgeite from a copper mine in Snowdonia, Wales, one of only two places in the world where the mineral occurs naturally. (Image courtesy of Amgueddfa Cymru—National Museum of Wales, Cardiff)

An international group of researchers has synthesized an extremely rare mineral and used it as a catalyst precursor to improve two reactions that are of great importance to the chemical industry.

Using a technique called supercritical anti-solvent precipitation (SAS), the group produced large quantities of highly pure georgeite, a disordered copper-hydroxycarbonate that is found naturally only in Australia and in an old copper mine in Snowdonia, Wales.

The group tested georgeite’s catalytic activity against commercial catalysts that have been used for a half-century in the water-gas shift reaction, in which water reacts with carbon dioxide to produce hydrogen.

“We found that the georgeite was a superb catalyst for the water-gas shift reaction and had a much higher performance compared to the commercial catalyst currently used in industry,” said Graham Hutchings, director of the Cardiff Catalysis Institute at Cardiff University in Wales.

Hydrogen is an essential ingredient in the manufacture of methanol and ammonia, which form the basis of hundreds of chemicals, including fuels, plastics, paints, solvents and fertilizer.

The group also found that their synthesized georgeite material was highly effective in carrying out methanol synthesis, in which CO2 and hydrogen are combined to make methanol.

“Catalysts based on copper-zinc oxide minerals have been used for many decades to catalyze both of these reactions,” said Christopher J. Kiely, professor of materials science and chemical engineering at Lehigh. “Our georgeite-derived materials represent the first time something potentially better has come along.”

The group reported its findings this week in Nature magazine in an article titled “Stable amorphous georgeite as a precursor to a high-activity catalyst.” The article was authored by researchers from Cardiff, Lehigh, the UK Catalysis Hub, University College London, Diamond Light Source in the United Kingdom, the University of Liverpool, the Technical University of Denmark, and Johnson Matthey, a multinational chemicals and sustainable technologies company headquartered in Royston, UK.

Georgeite belongs to a family of minerals called copper hydroxycarbonates that are widely used as catalyst precursors in the chemical industry. Scientists are familiar with other hydroxycarbonates, such as malachite, aurichalcite and rosasite, but know little about georgeite because of its extreme rarity, low purity, instability and highly disordered nature.

Chemists at the Cardiff Catalysis Institute synthesized georgeite using SAS, in which CO2 is subjected to conditions of heat and pressure that put it into a supercritical state where it displays the characteristics of both a liquid and a gas.

“Supercritical CO2 expands like a gas to fill up a volume while retaining the viscosity of a liquid,” said Kiely. “It’s an unusual state of matter and has the ability when bubbled through a solution to make solids precipitate out very quickly. Supercritical CO2 is also used for processes such as decaffeinating coffee.”

Chemists at the Cardiff Catalysis Institute synthesized georgeite by dissolving a copper-zinc-oxide precursor in an organic solvent and then passing supercritical CO2 through the solvent to rapidly precipitate out the georgeite.

“[We have shown] that stable georgeite can be readily synthesized using supercritical carbon dioxide as an anti-solvent in a precipitation process,” the researchers wrote in Nature. “The synthetic georgeite materials are precursors to highly active methanol synthesis and superior water gas shift catalysts as compared to those currently prepared from crystalline malachite.

“This new route to georgeite will open up new opportunities for the use of this important material in a number of applications.”

A crucial role for crystals

Researchers at Lehigh and the Technical University of Denmark used advanced electron microscopy techniques to structurally characterize the georgeite and determine why it produces such high performing catalysts.

“We looked at the georgeite with an aberration-corrected STEM [scanning transmission electron microscope],” said Kiely. “Georgeite had been thought to be completely amorphous, that is, more like glass than a crystalline mineral. We found that georgeite is in fact about 90 percent amorphous but has 2-nanometer crystals of copper oxide embedded within it.

“The actual catalyst is not a pure georgeite material,” said Kiely. “The georgeite, when deliberately doped with some zinc, is really a precursor to the active catalyst. It needs to be calcined, or heated in air, and then reduced in hydrogen gas before it can be used as a catalyst.”

To learn what happened during calcination and reduction, the group turned to colleagues at the Technical University of Denmark, which has an environmental transmission electron microscope (ETEM).

“The ETEM is a very specialized instrument,” said Kiely. “The beauty of it is that you can take a zincian georgeite precursor, heat it up in the microscope under a gaseous environment and then watch how it changes during the process. This allowed us to dynamically view the precursor material as it transformed into the active catalyst.

“What we saw with the ETEM is that when calcined zincian georgeite is reduced in hydrogen, it forms very tiny copper particles intimately supported on nanoscopic zinc oxide grains. This special nanostructure is responsible for the good catalytic properties.

“We compared this with the conventional catalyst materials derived from a crystalline malachite, and found that our zincian georgeite results in a much finer microstructure, with smaller copper and zinc oxide particles, which ultimately contributes to the superior catalytic performance.”

The synthetic zincian georgeite catalyst, said Kiely, has the additional advantage that its composition can be easily tuned, or altered, by adjusting the ratio of copper atoms to zinc atoms in the starting solution. It can also be made in large quantities.

These new materials were characterized at the Diamond Light Source by colleagues based at University College London and the University of Liverpool, where further fine details about its unique structure were determined using a synchrotron radiation source.

Li Lu, a Lehigh Ph.D. candidate and coauthor of the Nature article, performed the structural characterization studies using the aberration-corrected STEM and also helped analyze the microscopy results from the ETEM in Denmark.

The researchers have collaborated several years on the project. The synthetic zincian georgeite will require further testing and scaling up before it can find commercial application in industry, Kiely said. 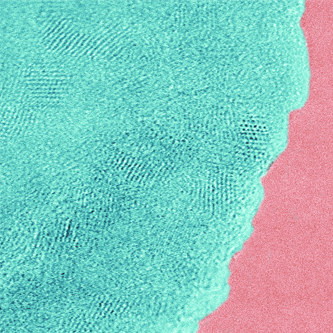