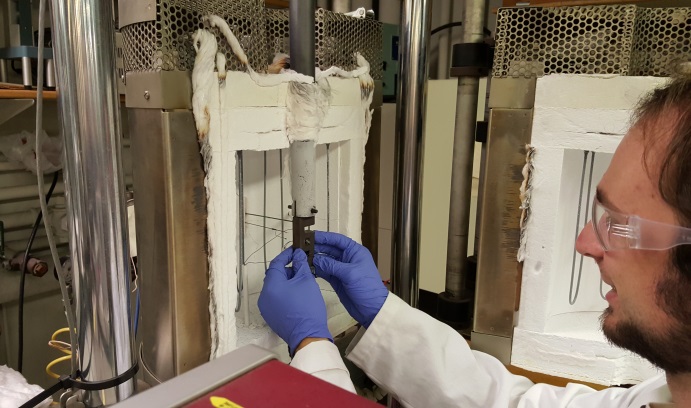 Charles McLaren uses an electric field to induce the softening of glass. Researchers from Lehigh and the University of Colorado discussed the advantages of the technique over conventional heating methods in an article in Applied Physics Letters.

The use of an electric field could make it easier to soften and form glass into desired shapes while reducing the amount of energy required to do so, researchers from Lehigh and the University of Colorado reported yesterday.

In an article published by the journal Applied Physics Letters, the researchers said the “application of a DC [direct current] field significantly lowers the melting temperature of glass.”

High temperatures are required to soften and form glass products into specific shapes, said Himanshu Jain, professor of materials science and engineering at Lehigh. These temperatures in turn require the consumption of large amounts of energy.

“Electrical heating is widely used in the initial melting process, but not for forming operations, which require glass to be soft and easily deformable, while also keeping the desired shape,” Jain said in a press release accompanying the Applied Physics Letters article.

The researchers’ approach “lowers the softening temperature by electric field, [offering] the potential to save significant amounts of energy,” said Jain, who directs the International Materials Institute for New Functionality in Glass (IMI-NFG) at Lehigh. This may also “lead to innovative methods of ‘micro-forming’ because electric fields can be manipulated much more precisely and selectively than plain old heating.”

The article is titled “Electric field-induced softening of alkali silicate glasses.” The lead author is Charles McLaren, a Ph.D. candidate in materials science and engineering at Lehigh. Coauthors are Jain and William R. Heffner, both of Lehigh, and Rishi Raj, professor of mechanical engineering, and Riccardo Tessarollo, a visiting researcher, both of the University of Colorado.

The group tested and compared the behaviors of three types of disilicate glass with a similar network structure but different properties. They ran experiments to compare the softening temperatures of the glasses while a rectangular piece of glass was heated at a constant rate under the simultaneous application of mechanical load, as well as with an electric field.

Then, said Jain, “We performed experiments on a few different glass compositions of varying properties to establish the generality of the phenomenon and to develop an understanding of the underlying mechanisms.”

The group’s results could prove useful for the shaping and forming of glass products at the micro- and nanoscale, said Jain.

“Gaining a better understanding of the underlying phenomenon will help us learn the limitations of glass as an electrical insulator,” noted Jain. “There’s tremendous interest in using glass as a supercapacitor for energy storage, for example. But it’s critical not to use glass that deforms easily in such applications, so it would be helpful to know in advance how the glass will behave.”

The group is exploring the mechanisms and behavior of a broader variety of glasses during various stages of softening.

“This will help us to identify glass compositions for specific applications that exploit electric field-induced softening,” Jain said.