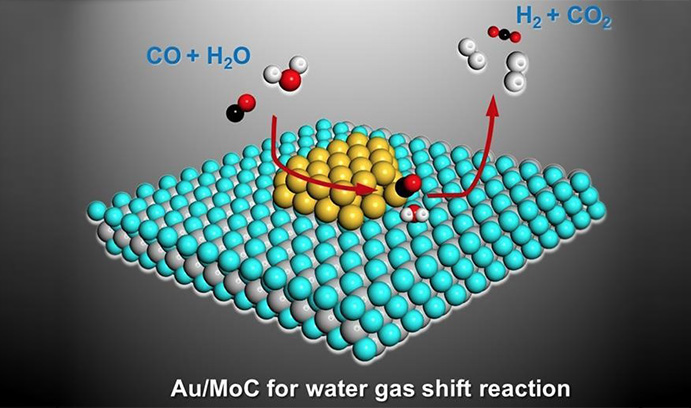 An international research group, including materials scientists from Lehigh, has developed a gold-based catalyst that converts carbon monoxide and water into a stream of pure hydrogen and carbon dioxide. (Image courtesy of Ding Ma/Peking University and Chemistry World)

Lehigh researchers have collaborated with colleagues in China and at three national laboratories in the United States to develop a gold-based catalyst that they believe could improve the performance and efficiency of fuel cells that run on hydrogen.

Writing in Science magazine, the group said its catalyst—comprising raft-like gold nanoparticles on a special type of molybdenum-carbide (α-MoC) substrate—had achieved a high level of activity at low temperatures while producing the pure streams of hydrogen necessary to power fuel cells.

The researchers said they achieved their results by utilizing the water-gas shift (WGS) reaction, which converts carbon monoxide (CO) and water into hydrogen (H2) and carbon dioxide (CO2). The group was able to purify the hydrogen by using up all available CO, which tends to deactivate fuel-cell catalysts. The WGS reaction, which is typically used to make hydrogen for the manufacture of chemicals like ammonia, is also a critical part of the effort to transition from hydrocarbon-based fuels to hydrogen.

“Our reaction produces a stream of highly pure hydrogen which isn’t contaminated with CO, which if present would poison the catalysts within the fuel cell,” said Christopher J. Kiely, the Harold B. Chambers Senior Professor of Materials Science and Engineering at Lehigh. “We’re really excited by this development because it brings us a step closer to having cars that run on hydrogen fuel cells.”

Kiely said the use of the α-MoC substrate—an innovation by Ding Ma and his colleagues at Peking University in China—enabled the group to overcome shortcomings previously reported with catalyzing the WGS reaction.

“It has long been known that gold supported on various oxide substrates could bring about the WGS reaction. The sticking point to date has been that generally the catalytic activity was too low and invariably the catalyst was not stable enough for long-term use.”

The group reported its results July 28th in a paper titled “Atomic-layered Au clusters on alpha-molybdenum carbide (α-MoC) as catalysts for the low-temperature water-gas shift reaction.”

In addition to Kiely, the paper’s authors include Li Lu, a Lehigh Ph.D. candidate, and Wu Zhou, who earned his Ph.D. at Lehigh in 2010 and is now a professor at the University of the Chinese Academy of Sciences in Beijing.

To achieve high catalytic activity at low temperature (i.e., below the 150 degrees C. needed to efficiently operate a fuel cell), the group dispersed the gold onto a carbide (α-MoC) instead of the iron oxide, cerium oxide or other reducible oxide substrates previously tried for the WGS reaction. The new catalyst formulation proved more stable than conventional catalysts, while achieving much greater activity, a measure of a catalyst’s efficiency.

“The beauty of the α-MoC support,” said Kiely, “is that it can activate the water so that it creates active surface hydroxyl (OH) species, which can then react with the CO to give hydrogen and CO2. The carbide support therefore plays a very strong and critical role in this reaction.

“This system works very well at the temperatures and pressures needed for fuel cell applications and its activity is an order of magnitude better than that of previously tried gold-based catalysts.”

In studies done with Lehigh’s aberration-corrected scanning transmission electron microscope (STEM), the group demonstrated that the gold exists in two distinct forms on the α-MoC support.

“The microscopy has shown that the gold exists as nanoscale rafts just a few atoms thick and also as individual gold atoms dispersed over the support,” said Kiely, who directs Lehigh’s Electron Microscopy and Nanofabrication Facility.

“We measured the catalytic activity with both of these species present on the α-MoC support. Then we selectively removed the particles, leaving just the atoms behind. When we did this, the activity dropped to less than one-tenth of its original level. That showed us that most of the activity is coming from these raft-like particles.”

The article is the ninth Kiely has published to date in Science; he has also published four in Nature. The two publications are considered the world’s leading science journals.

Earlier this month, Kiely received one of the highest honors in his field when he was inducted as a Fellow of the Microscopy Society of America.

The MSA Fellow designation annually recognizes senior distinguished members of the society whose achievements and service have made significant contributions to advancing the fields of microscopy and microanalysis.

Kiely was cited for “distinguished contributions to the characterization of nanoscale features in particulate materials and interfaces, particularly in the areas of catalyst materials, nanoparticle self-assembly phenomena, carbonaceous materials, and semiconductor heterointerfaces.”

Kiely, who also directs the internationally renowned Lehigh Microscopy School, is the fifth faculty member in the history of Lehigh’s department of materials science and engineering to be elected an MSA Fellow. The others are J. Alwyn Eades, Charles E. Lyman, David B. Williams and the late Joseph I. Goldstein.