Colonel Donald H. Bott ’54, former executive director of the Lehigh University Alumni Association (LUAA) and lifetime Lehigh advocate, passed away on May 2, 2017, at his home in Tucson, Ariz., surrounded by his loving family.

Col. Bott began his second career at Lehigh after serving in the United States Air Force for 29 years as a command pilot. During this time, he participated in 69 combat missions in Vietnam and was also stationed at HQ European Command, located in Stuttgart, Germany. Col. Bott was awarded the Legion of Merit with Oak Leaf Cluster, the Bronze Star and the Defense Meritorious Medal.

Although Col. Bott’s role as executive director of LUAA was distinctly different from his first career, he led with the same intensity and drive. His determination, coupled with the fact that Lehigh was on the cusp of launching into a period of tremendous growth in the early ’80s, presented the opportunity to grow an alumni association that was one of the very best.

President Peter Likins remembers working closely with Col. Bott. “When I think of my most special time with Don, my thoughts turn to the hours we were together in Florida, driving from one alumni club to another, sharing personal stories, establishing bonds that meant more than our professional relationships,” commented Likins. “Don was a valued colleague during our years together at Lehigh and a true friend in our later years in Tucson. Our condolences to Mim and the kids are heartfelt.”

During his 12 years as executive director, Col. Bott energetically led the alumni staff and community with many new ideas and programs…albeit on military time. “I remember Don would use military acronyms,” explains Barbara Turanchik ’75, director of Lehigh club sports, who worked in LUAA for 22 years and served as executive director from 1995 to 2001. “He would use all these initials that we didn’t understand. We had to remind him that we were not in the Air Force. ‘Don, you’re on Lehigh time,’ we would say.”

Thad Turner ’61, a wrestling coach, went on to work as associate director with Col. Bott for more than 12 years. “Maybe it was his training in the service. He gave you a job to do and left you alone to do it. He respected those people who worked for him. I appreciated that," Turner commented. "Don was one of the best bosses I ever had, and an even better friend."

By the time Don retired from Lehigh in 1995, the university had reached a high in alumni satisfaction and participation. That year, 43 alumni clubs watched the Lehigh-Lafayette football game at telecasts and a record number of alumni took advantage of alumni benefits, services and events. He had also spearheaded the graduate alumni council, career counseling for alumni, alumni admissions outreach, the use of email, and the creation of several international clubs including the Hong Kong Club.

These accomplishments were made possible as a result of Col. Bott’s personal leadership and also through important attributes that he said all Lehigh alumni possess: passion, dedication, focus and courage. “You have what it takes,” he wrote in his parting column in the alumni Bulletin.“You are Lehigh leaders. Your hearts and souls are involved. You will assure that Lehigh’s star stays bright in the heavens.”

“There are necessary characteristics to be successful as executive director of the LUAA,” explains James J. Duane III, Esq. ’73, Lehigh trustee emeritus. “Don had all of them. He was very supportive of the university and embedded in the community. Most importantly, he was loyal to his family, loyal to his friends, loyal to Lehigh, and loyal to his country. He loved them all.”

In addition to serving as executive director, Col. Bott served as his 1954 class committee chair and class vice president. He received the Alumni Award in 2004 for his longstanding dedication and service to the university, the Eugene C. Grace Award, and the Paul J. Franz ’44 Award in 1994 for staff excellence and devotion.

One of the characteristics of a strong leader is the ability to mentor others. Col. Bott served as a mentor to many volunteers and staff members at the university over the years, even after he retired. Former LUAA director Gary Liddick ’76, co-chair of the Alumni Awards committee, is one of those individuals who was fortunate to work with him. “When Don retired from service on the Awards committee, I remember telling him, ‘You always provided keen insight, a logical thought process and a sense of history.’ Don was a terrific mentor.”

Col. Bott graduated from Lehigh with a bachelor’s degree in business administration and was a member of Air Force ROTC. He was a member of Kappa Alpha as an undergraduate and served as a long-time advisor and mentor for the fraternity. James Lynch ’90 noted, “Many young men received Don's good counsel at the Kappa Alpha house at Lehigh. ‘The Colonel’ always offered unique perspective transcending fraternity life to inspire and provide an example in our lives well beyond Lehigh.”

He was also involved in the Concert Band, the Glee Club, and the Choral Arts Club. Col. Bott’s love for singing led him to meeting his wife, Miriam Johnson, a beautiful co-ed from Moravian College, when they sang madrigals together.

His singing continued throughout his life, and his Glee Club days came full circle during his time as executive director. “Don would lead the incoming freshman class in singing the Alma Mater,” explains Turanchik. “His voice was amazing. It would send chills through you because it meant so much to him, and he wanted it to mean as much to the incoming class. When he belted out ‘Hail, All Hail Lehigh!’ he really meant it.”

Col. Bott is survived by his wife “Mim,” son Chris and his wife Shelley Boyd, daughter Suzanne and son Timothy, granddaughters Emily and Haley, and many nieces and nephews, including Nikhil Bott, Lehigh Class of 2000. Services are planned for Arlington Cemetery and will be announced to the Lehigh community at a future date. 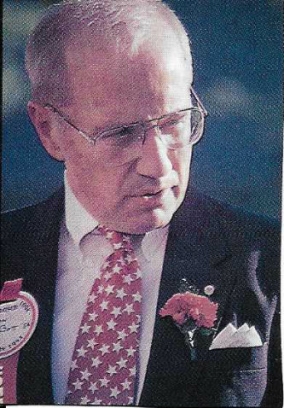