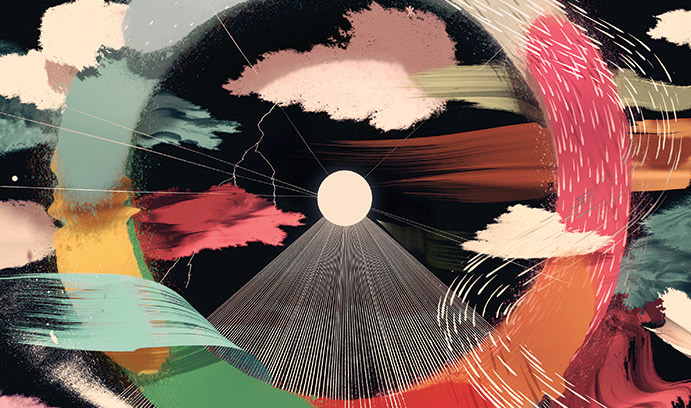 Rick Blum uses advanced signal processing techniques to produce models for radar that can be tools for the design of real-world products. (Illustration by Santtu Mustonen)

The Renaissance of Passive Radar

What do you envision when you think of radar? Massive, rotating antennas at airports tracking your last flight? Colorful precipitation maps presented by your local TV meteorologist? Beams sweeping the sky in search of incoming missiles?

Get used to experiencing radar much closer to home, says Rick S. Blum, the Robert W. Wieseman Professor of Electrical and Computer Engineering. Thanks to a concept known as multiple input multiple output (MIMO) radar, which Blum is credited with inventing with a team of academics and Bell Labs collaborators, sensors are getting better at identifying smaller objects at close range—perhaps that pedestrian crossing the street in front of you, or the burglar entering your side window.

"I'd like to see radar work its way into commercial devices, and this seems to be happening, maybe first with automobiles," says Blum. He currently has National Science Foundation funding to do the math to quantify the feasibility of passive radar, which uses advanced signal processing techniques to measure reflections from objects illuminated by ambient radio signals in the environment—cellular phone transmissions, AM, FM, and TV broadcasts, for example.

The idea of passive radar is nearly as old as radar itself. Before and during World War II, the British deployed transmitters and receivers to create an active radar net around the south of England, which could detect Nazi aircraft forming over France. For their part, the Germans figured out how to detect RAF fighters over the North Sea by measuring beams from the British transmitters reflecting off of them.

With conventional active radar, a central transmitter sends high power pulses of radio waves in many directions. If a target, such as an aircraft, is in range, the signal will bounce back to the originating antenna (the detection part of radar). The time it takes to receive this return signal indicates how far away the object is, and the Doppler effect uses small shifts in that signal's frequency to determine whether the target is moving away or towards the radar station.

MIMO radar is derived from the principles of MIMO communications techniques that give you faster Wi-Fi with multiple antennas and allow stronger cellular coverage. Blum worked with researchers at Bell Labs who made the surprising discovery that adding transmit and receive antennas "significantly increased the rate that data could be passed," he says. "Nobody expected that." (Interesting fact: The Bell team pronounced the term "mee-moh," while later researchers adopted the rendering "my-moh," Blum says. No-one knows why, although a New Jersey/New York accent may be involved.)

Having multiple antennas creates "apparent" bandwidth, which can be thought of as a larger hose to move data. Your home router with a four-antenna array downloads your Netflix much faster than any one channel could alone (provided your device's antennas are similarly configured). Blum determined that the technique was applicable to radar, too.

"The idea is simple: If you want to understand a situation better you look at it from different points of view," he says. "Radars located far apart provide quite different views of an object. Combining these streams of data gives more reliable object detection." The technique also makes it easier to identify and reject spurious emissions and clutter in the signals.

Because radar returns are highly dependent on the angle and direction at which they hit the target, "moving an antenna a tiny bit can take you from a very strong signal to none at all," Blum says. "With many antennas it is highly likely some of the antenna returns will be large, providing more reliable target detection due to the inherent diversity." Properly deployed, separated antennas "can also obtain very high resolution on the location of the target or an image you can use to classify whether it is a person or an airplane."

Their highly cited work on MIMO radar led many to credit Blum's team with inventing the concept. A series of three articles introducing MIMO radar have been cited nearly 4,000 times. A 2016 analysis by the Canadian government found that Blum is in the top 1 percent of researchers cited in the radar field.

Why, after many tests and abandoned systems over the years, is passive radar experiencing a renaissance of interest?

"Passive technologies are underdeveloped," Blum concedes, but offer many advantages. Unlike the early days, most parts of the world are rich in digital communications signals that can potentially serve as radar illuminators. And as competition for cluttered radio spectrum increases, it makes sense to find out if signals can have dual use. In tactical situations, military units can detect nearby targets without broadcasting a signal that would allow enemies to locate them.

"Not to mention, it's a heck of a lot easier and cheaper if you don't have to produce and power your own transmitter," he says.

With active radar, the recipient knows everything about the signal being transmitted — its origin, power, frequency, what data is carried on it. So it is relatively straightforward to isolate returns from the target.

A passive system using, for example, a cellular tower, suffers a number of "losses" — uncertainties that reduce the accuracy of the result. But the losses are not insurmountable, based on Blum's research.

"If I know I am looking at a GSM or LTE (cellular) signal, I know the form of the wave, and the frequency. I don't know what bits are being transmitted because of the conversation on the channel, but I can estimate them," he says. "It turns out that the losses are pretty small, and passive works almost as well as active."

Blum and collaborators have already published a number of results under the NSF grant. He has shown the potential improvements that come from increasing the number of transmit and receive antennas in situations with high signal-to-noise ratios, and is working to refine the calculations to measure performance even with weak signals.

"We've developed a really intricate model" with statistical descriptions for reflection and clutter as well as correlation of signals, Blum says. This model is helping to derive an optimal performance measure for passive systems based on the number of transmit and receive antennas.

A number of automobile manufacturers have reached out to talk to Blum about vehicle radars. Today active radar and cameras provide some basic driver-assist features, like helping to parallel park or proactive braking, but the push is on to release self-driving cars. Carmakers are interested in combining cameras and radar in self-driving systems because radar can "see" in inclement weather conditions where cameras are impeded. These systems are improving rapidly but are far from perfect. Last year, a Tesla driving on autopilot was involved in a fatal crash when its visual/radar system did not identify a tractor-trailer crossing a Florida highway.

Blum believes his simulations model interference and other poor signal conditions that could limit the use of passive radar in cars. But that doesn't mean the technology will show up in your vehicle anytime soon. Passive radar receivers have to find, identify and test potential signals before they can use them, and this work has to be automated in order for radar to just work without user intervention, he says.

Still, as growing use turns expensive radar modules into cheap chips, Blum thinks that active and passive radar will start working their way into home security sensors and other devices on the Internet of Things.

"This is why I love being an engineer," Blum says. "We don't just study math and physics. We exploit them to create things that add value to people's lives."

This story appears as "The Renaissance of Passive Radar" in the 2017 Lehigh Research Review.