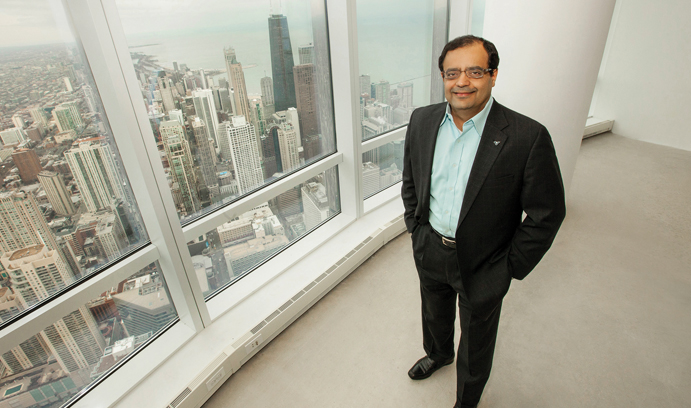 Entrepreneur Sanjay Shah ’89MBA has a passion for technology and solving problems.

By his own account, Sanjay Shah ’89MBA is an accidental entrepreneur.

“I was a corporate person,” says Shah, 48, on a recent visit to Lehigh. But while working for giant software provider SAP in Chicago, he says, the entrepreneurial bug bit him. He approached his bosses with some ideas of where they should invest more resources. “They said, ‘No, that’s not where we want to go.’ So I said, ‘Maybe I should go try this myself.’”

He did. Now Shah leads global software company Vistex Inc., which helps companies with automating their go-to-market programs, complex pricing and rebate contracts.  As its founder and CEO, he has guided the company’s growth to 1,100 employees worldwide, including in the United States, Europe, Asia and Latin America, and to annual revenues approaching $200 million.

What does it take to be an entrepreneur? “Persistence,” he says, “an unrelenting belief in your ideas, an unrelenting conviction in your vision.” And, he emphasizes, “You also need good fortune….The reason I say that is, it helps keep you grounded. I like to stay grounded.”

Shah, who came to the United States from India in the late 1980s to attend Lehigh, grew up in a close-knit family in South Mumbai, where his parents still live. His father owned a chain of one-hour photographic labs. Shah studied commerce and languages as part of his undergraduate studies in India, but when it came time for graduate study, he set his sights on Lehigh, the alma mater of a business icon he deeply admires, Lee Iacocca ’45.

“I was actually one of the first ones in my family to venture out,” says Shah. “Our entire family lived within a one-mile radius, all my uncles and aunts, and so when I mentioned to them that I really wanted to go to graduate school in the U.S., they were like, ‘Why? Find something to do here. Why would you want to go 10,000 miles away?’

“I felt I needed to broaden my perspective,” says Shah, and he headed to Lehigh. “I felt that this would give me the opportunity to do that.”

A passion for technology

After getting his MBA from Lehigh's College of Business and Economics, Shah worked in audit at PricewaterhouseCoopers, which had recruited him at Lehigh for its offices in Easton, Pennsylvania.  Within six months, he says, he knew it wasn’t the right job for him. He switched directions, taking a job with General Motors in Canada in operations and logistics. There, he says, he came to realize his passion for technology, as applied to business.

“If you ask—what is the one thing you like doing the most?—it’s problem-solving,” says Shah. “And technology helps me solve business problems. Technology is a means to an end. If you are confronted with [business] issues, there is technology out there to address them.”

After General Motors, Shah joined SAP as it expanded into Chicago, then relocated to Germany with the company for about two years. He was back in Chicago with SAP when he approached company officials with his niche ideas. Though they did not want to invest in those areas at the time, he says, they told him that if he ever became successful, they would consider working with him.

“I went off and built software and a software company to execute my vision,” says Shah.

The genesis of his company, Vistex, is a word he derived from a fusion of “vision” and “execution.” He founded the company in 1999, shortly after leaving SAP. Its customers are retailers, manufacturers and distributors, and they include some of the world’s biggest companies such as Apple, Walmart, General Motors and 3M. (SAP is a minority investor and sells the company’s software through its network.) Shah says he hopes to eventually take the company public.

With offices in 20 countries and customers all over the world, he does a lot of travelling on his corporate jet. He is a licensed pilot, but he does not do his own flying.

“People talk about a work-life balance. For me, it’s more a work-life integration,” says Shah, who is married and the father of two daughters. “I’m always working. I may not always physically be in the office working, but I’m always mentally working. That’s how I am. I’m 24/7 thinking.”

One of his key lieutenants, Lori Lea, the company’s vice president of finance and human relations, said Shah “has boundless energy and brings a level of insight and analysis across all business functions that makes him truly unique and inspirational.”

The company’s philanthropic arm focuses on education, health and humanitarian issues in the Chicago area and around the globe. Projects have included food drives, robotics for inner-city children and the construction of a birthing center in Sierra Leone.

“It’s a way of giving back, especially in the regions where we live and we work,” he says.

Recently the tech pioneer made news headlines when he bought the 89th floor penthouse at the Trump International Hotel & Tower in Chicago—one of the tallest residences in the world and, with a purchase price of $17 million, the most expensive real estate transaction in Chicago history.  Now more people know about Shah—and Vistex.

“I knew it was going to attract some amount of attention,” says Shah, who, until the December 2014 purchase, had lived a very private life. “But it was a little overwhelming—all in a positive way.”

The penthouse, with its floor-to-ceiling windows, is taking Shah to new heights—literally. Rising 1,200 feet from the ground, it provides sweeping, panoramic views of Chicago and its landmarks. His favorite vantage point, he says, is where the Chicago River blends into Lake Michigan. Shah anticipates it will take another year to build out the 14,260-square-foot property, which will be the family’s second home in the Chicago area. He also hopes to use the property to host Vistex clients and philanthropic events.

On his recent visit to the Lehigh campus, Shah visited some old haunts, met with students and reconnected with professors who had helped shape his future. In reminiscing about his Lehigh days, the studious Shah remembers finding “some nook and cranny” in the historic Linderman Library to study or a spot on the expansive lawn in front of University Center to spread out with his books.

“It was very invigorating,” he says. “This is one of the prettiest campuses, and there’s something to be said for that, especially for someone who would never even have dreamt of being in a place like this, a learning environment like this. It provides additional motivation to learn.”

His Lehigh professors, many of whom were practitioners in their field, were “superlative,” he says.

Students in the College of Business and Economics who met Shah on his visit were curious about his transition from the corporate world into entrepreneurship. How had he dealt with setbacks?

“If you discover the entrepreneur in you, if this is what you really want to do, I believe the drive and the passion will be so high that you will not treat [obstacles] as setbacks. They will be just bumps along the way.” 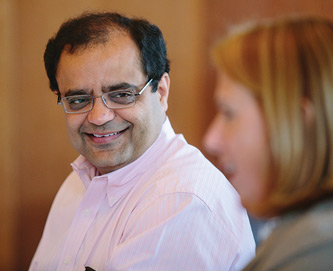 On a recent visit to the Lehigh campus, Shah met with students and reconnected with professors who had helped shape his future.