Posse Plus Retreat: ‘It’s OK to Have Different Ideas and Viewpoints’

Lehigh students, staff, faculty and administrators converge in the Poconos for a weekend-long retreat that explored 'The State of Our Union.'

A cross-section of the Lehigh community gathered in the Poconos in early March for a weekend-long retreat that allowed for deep exploration of “The State of Our Union” and prompted participants to create a personal plan for making a difference on campus, in the community and around the world. 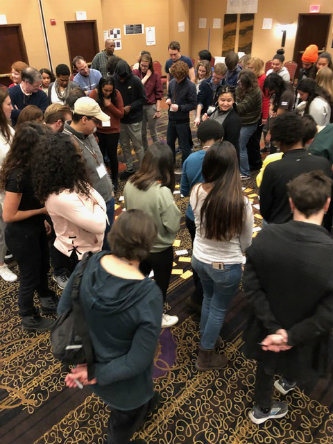 Lehigh held its first Posse Plus Retreat in early March in partnership with The Posse Foundation in the Bay Area of California on 'The State of Our Union.'

The Posse Plus Retreat, the first held by Lehigh in partnership with The Posse Foundation in the Bay Area of California, brought together students, faculty, staff and administrators for a spirited, thought-proving exchange of ideas and viewpoints, including on issues of immigration, education and privilege.

“One of the purposes of this was to learn that it’s ok to have different ideas and different viewpoints,” said George White, managing director for Student Access and Success at Lehigh. “One of the skills we were working on was—how do you have a meaningful, appropriate discussion and dialog with people who may think or believe differently than you do, and be open minded enough so that you can take something away from that conversation?

“In other words, let’s have conversations and dialog without shouting at each other,” White said. “Let’s learn from one another. Activities allowed for that level of engagement.” 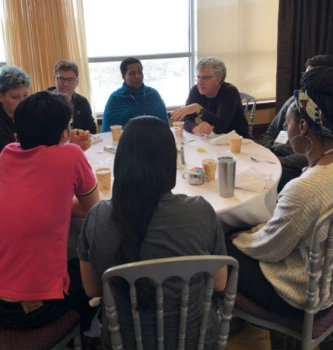 President John D. Simon was among the administrators who attended the retreat.

The Posse Plus Retreat grew from Lehigh’s partnership with The Posse Foundation, a nationwide college access and youth leadership development program. As part of the initiative with the foundation in the Bay area of California, Lehigh offered full scholarships to a “posse” of 10 public high school students as part of its ongoing commitment to create a more diverse campus environment. The first cohort of students arrived at Lehigh in fall 2018. A second cohort will be arriving on campus for the start of the 2019-2020 academic year. In four years, 40 Posse scholars will be part of the Lehigh community.

The Lehigh retreat was attended by 82 people and included first-year students through seniors, as well as student athletes, Student Senate members, the Posse cohort, and sorority and fraternity members. Among the administrators attending were President John D. Simon, Provost Pat Farrell, and Vice Provost for Student Affairs Ricardo Hall. 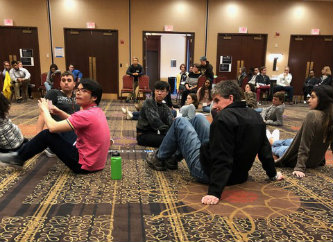 Participants learned how to have meaningful, appropriate discussions with people who may think or believe differently.

“We wanted diverse voices in the room,” said White. “We didn’t want an echo chamber. We didn’t want people talking about, say, immigration and everyone have the same viewpoint.”

Other Posse partner colleges and universities across the country similarly hosted retreats on “The State of Our Union.” The Posse Plus Retreats, held annually at locations across the country, have in the past dealt with such themes as race, meritocracy, gender and social responsibility.

Lehigh’s inaugural retreat was held at the Bushkill Inn and Conference Center in the Poconos. Workshops were intensive, White said.  As part of the “Four Corner” activity, participants took their place in a corner of the room based on their level of agreement or disagreement with a statement concerning border issues and the like. Participants were then asked why they believed as they did.

In many cases, White said, people’s views were shaped by the way they interpreted questions, words or statements. “What it did was open people’s eyes,” said White, adding that participants came to realize that they should not immediately react to people’s beliefs because there may be differences in interpretations. “That was a really valuable, helpful activity.” 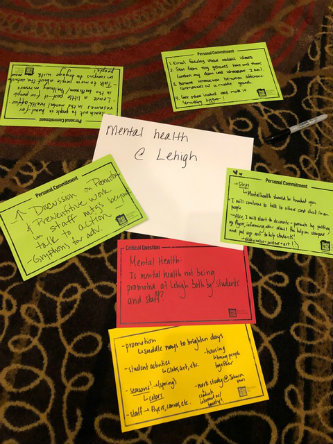 Participants identified issues that they planned to work on when they returned to campus and created mini action plans in such areas as immigration, education and mental health.

In another “Game of Life” activity, three-person teams took on generational roles of parent, ancestor and prodigy and learned the values associated with an education. They had to assess life’s outcomes based on what cards they were handed. As a student, did they get to attend an elite private school or a small rural public school? Were they able to then get into an elite university or a community college? What kind of jobs could they land? Were they passing on assets or debts, privilege or poverty to their sons and daughters?

“The topics we discussed resonated with everyone,” said Kendall Prime ’22, who was among the participants. “Even when there was disagreement, we found common ground. Overall, I left the retreat with a deeper sense of community and many new relationships with people I would not normally cross paths with.”

Participant Matthew Gunton ’22 said the retreat helped him get to know many of his peers at Lehigh in a new and profound way.  “I know hearing other people's life experiences has opened my eyes to many problems in this world, “ he said, “and I hope to use my time at Lehigh to truly look into the way the world is, rather than the way it seems.”

As the weekend progressed, the retreat began to focus participants on the “so what” and “now what” of the various topics.  How are personal experiences shaping participants’ understanding of issues? How does “The State of the Union” impact what students, faculty and staff are doing on Lehigh’s campus?

Participants identified issues that they planned to work on when they returned to campus and created mini action plans in such areas as immigration, education and mental health. Participants talked about building empathy on campus, as well as creating a campus coalition to confront segregation, White said. They also planned to explore who might be missing from conversations, clubs and activities on campus and in the community—and why these individuals or groups were missing.

“The goal of the Posse Plus Retreat was to strengthen the bonds of Lehigh and create an action plan to help make our home a more inclusive, connected campus,” Prime said. “I can happily say that we accomplished this within the three days of the retreat by combining our passions and interests of all the students present.”

For one, Prime said, she and her peers want to make sure that students have a safe place to go with any harassment complaints, so they are looking into the resources already in place on campus and whether changes are needed to strengthen avenues of recourse.

“Sometimes voices that speak out against discrimination are silenced when they should really be heard,” she said, “and our campus can take steps to hold those who actively perpetuate the shut down of such complaints accountable.”

Prime also pledged to personally be more open in her everyday life.

“Even though this may appear small,” she said, “any change starts on an individual level. I won't look down on my way to class, and I will start more conversations by saying hello. “

Participant Mohsen Mahdawi ’22, who was born and raised in a Palestinian refugee camp, said he was so “deeply touched” by the retreat that he found himself weeping during a “closed-eyes” activity at the end of the weekend. He said he appreciated the open dialog and the “safe space” for communicating with his peers and faculty and administrators.

“Coming to Lehigh, I had a dream of home and unity that I missed in my past,” he said. Being raised in a refugee camp, “I grew up during wars that segregated Israelis and Palestinians and made it impossible to have a sense of peace, unity or home. The Posse Plus Retreat was an important step towards a vision of unity on the Lehigh campus.”

Mahdawi continued, “I felt that my voice has been heard, that my passion for peace has been acknowledged, and that there is a hope to come together to create a home of unity at Lehigh that includes all students.”

Plans are already underway for next year’s Posse Plus Retreat. 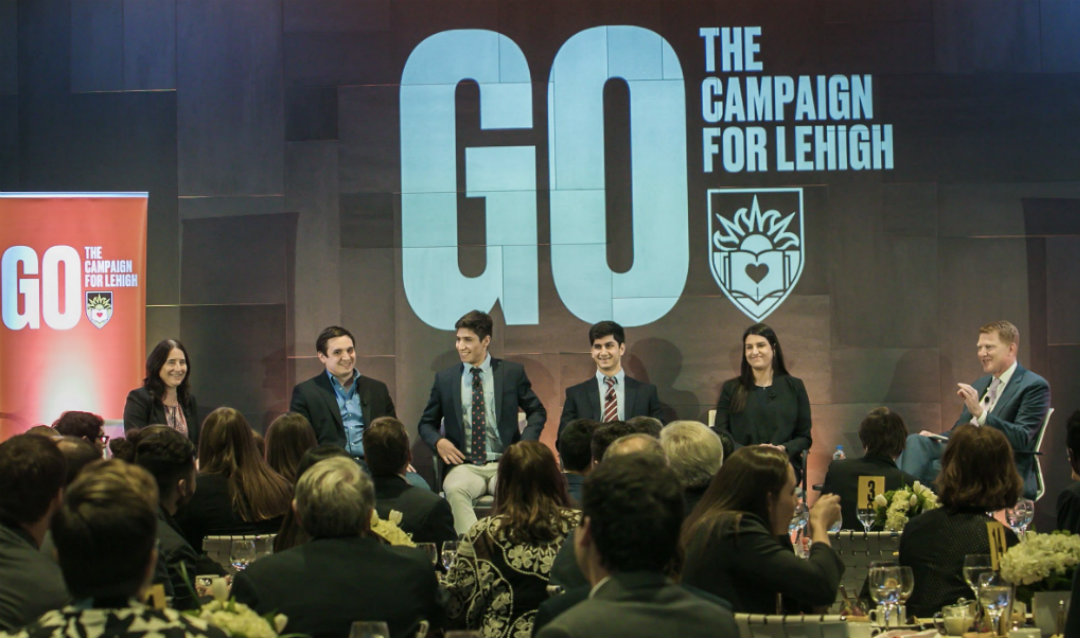 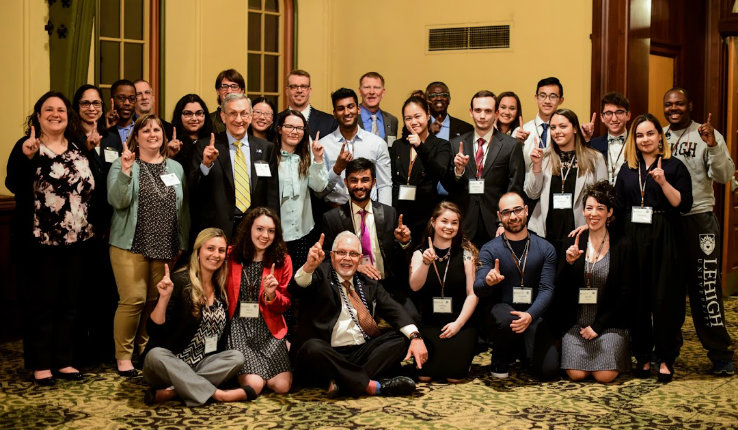