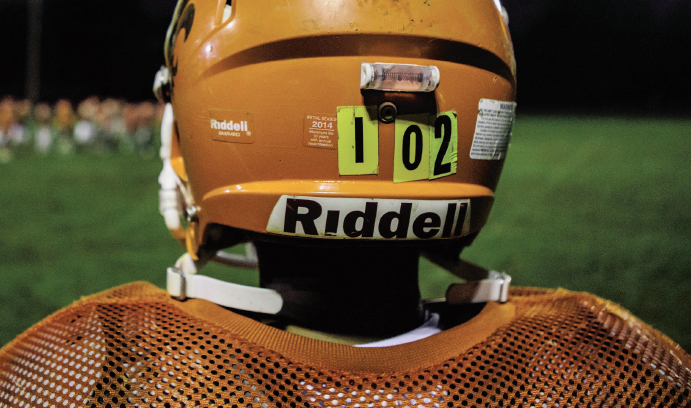 Growing up, Jessie Garcia ’12 ’13G suffered multiple concussions while playing sports. Challenged to find solutions for problems while pursuing her master’s in technical entrepreneurship at Lehigh, Garcia began developing a simple way to alert players—as well as coaches and parents—if someone takes a potentially concussive hit.

Fast forward to 2018. The Tozuda head impact sensor—manufactured by the company Garcia founded after graduating from Lehigh—measures g-force and turns red if a player sustains a hit above a certain threshold. The mechanical device, which attaches to the back of a helmet, is expected to hit the market later this year following a Kickstarter campaign in Spring 2018.

“The whole idea is to empower people to be aware of concussions and injuries,” said Garcia, who left an account manager job at a marketing company in 2015 to focus full-time on the head impact sensor. “Everyone deserves to be safe. I think safety doesn’t need to be complicated. That’s why we have worked hard to create a very simple solution to the problem [of concussive hits] that’s affordable and reliable.”

Tozuda—the Spanish word for hardheaded—was a name that Garcia was affectionately called by her abuelita (grandmother) as a young girl “because once I got my head wrapped around something, I just kind of stuck with it. It’s hardheaded in a determined way….not giving up. I kind of embraced [the word].”

Athletes are often portrayed as hardheaded too, she said, because they want to keep playing, even if injured. “We’re really determined to change the mindset,” Garcia said. “Yeah, we want you to be determined to be the best athlete that you can be, but don’t risk playing injured.”

Tozuda, which is based in a makerspace in Philadelphia, Pa., has two additional full-time employees and two part-time employees, including Chris Basilico ’10 ’12G, the company’s chief technology officer. A team of students in Lehigh’s Integrated Business and Engineering program (IBE)—Sean

The IBE students helped line up high school and youth football teams to test the impact sensor on the playing field, and they assessed marketing strategies, such as where to sell the product, and to whom. The students said interest was high among coaches as well as parents who worry about their children participating in football and getting injured. Miya, who had suffered concussions when he was younger, said his parents had been reluctant for him to play and would have been more assured with such a device.

“If the sensor goes off, it doesn’t mean that you have a concussion,” said teaching assistant Bram Robinson ’17, who led and mentored the IBE team. “But there’s a high percentage that you do, so you should go get checked further.”

The concussion problem among athletes has been amplified by news reports of long-term brain damage suffered by professional football players who sustained concussions, and the 2015 film Concussion, which tells the true-life story of a pathologist who discovered a link between football and chronic traumatic encephalopathy (CTE).

“Everybody knows [concussions] are happening, and now everybody’s trying to solve the problem,” said Trongone, adding it was “awesome to be on a project that’s solving a problem.”

Garcia said the company invented its new technology through a lot of research and development, a process she found both frustrating and rewarding. While there are costlier, electronic options, she said, she aimed to make her product affordable—it will likely sell for about $30—to benefit more teams and players.

“Price point should not dictate who gets to play safely,” she said.

Though the technology has multiple applications, she said Tozuda will initially focus on helmeted youth sports, such as football and hockey. Future applications could include the construction field and the military.