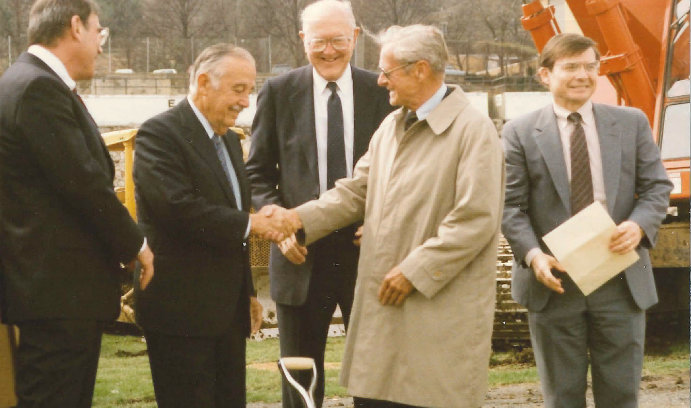 During the Rauch Business Center groundbreaking on April 7, 1989, Philip Rauch Jr. ’33 (second from left) is congratulated by the Rt. Rev. Dean T. Stevenson ’37, emeritus member of the Lehigh University Board of Trustees who provided the invocation. Fellow Board of Trustee members (from left) Eugene Mercy Jr. and Frank Rabold ’39 enjoy the celebratory moment with President Peter Likins.

Philip Rauch Jr. '33 epitomized the Lehigh success story. Using what he learned as a business major and a student athlete while at Lehigh, he helped expand his father’s clamp manufacturing business into the successful, diversified enterprise that was the Ideal Corporation.

Rauch championed the university that enabled his illustrious career in numerous ways, most notably through a leadership philanthropic gift to help construct the Rauch Business Center and the Philip Rauch Fieldhouse, home to Lehigh’s men’s and women’s track teams. He also established The Philip Rauch Center for Business Communications as a resource for improving business and economics students' writing, oral presentation, listening, networking, leadership and professional skills.

In honor of his strong conviction that the ability to communicate verbally and in writing is essential for business executives, the Rauch Foundation has announced it will provide a generous grant to establish the Rauch Media and Communications Lab. The lab will be located in a new College of Business and Economics (CBE) building that is currently in the design stage. The lab will help enable the CBE to emerge as a top-tier business school, while also deepening Rauch's lasting legacy of fostering student success at Lehigh. The strategic expansion of CBE’s facilities includes the renovation of the existing Rauch Business Center and the construction of a new building diagonally across Taylor to the existing business college building.

"My uncle, Philip Rauch, was committed to the success of Lehigh University. He was especially passionate about the power of clear communications as a means of working together effectively. In fact, his original intention in creating The Philip Rauch Center for Business Communications was to find a way for engineers and business people to better understand one another,” said Nancy Rauch Douzinas, president of the Rauch Foundation. “We know that he would be pleased that the Rauch Foundation will continue to support communications technology at Lehigh and ensure that the school keeps pace with the transformations driving business today.”

Georgette C. Phillips, the Kevin and Lisa Clayton Dean of the College of Business and Economics, stresses that today’s business professionals must be adept with multimedia and communication tools to communicate or introduce the next best idea, and it is the responsibility of the college to ensure that Lehigh’s graduates have such skills. The Rauch Foundation's grant will re-invest in CBE’s quality facilities and technology to ensure they are keeping pace with the transformations driving business forward. It will also further support the mission of The Philip Rauch Center for Business Communications and make investments in student technological proficiency and enhanced communication and teamwork skills. Students and faculty will use state-of-the-art technologies to develop presentations, videos, podcasts and other technologically based communications. Students will benefit from coaching and feedback in real-time with the learning laboratory.

Though Rauch was a proven loyal and generous supporter of Lehigh initiatives and student success, he was not an official graduate of the university. He left in 1932, his junior year, when the death of his father brought him home to help run the family business with his siblings. In time, he would become president of the company.

Founded by Rauch's father, Philip Sr., in Brooklyn in 1913, the Ideal Corporation manufactured stainless steel hose clamps for automobiles and aircraft. Philip Sr. had invented the Ideal Clamp while he was operating a taxi company. Once he realized the extent of the demand for the device, he started the Ideal Clamp Manufacturing Company. The successful hose clamp design consists of three parts–the band, the screw, and the housing. The band is the part that encircles the tube, the housing holds all the parts together, and the screw is used to adjust the size of the clamp.

In 1919, Ideal was chosen to supply the hose clamps on the first transatlantic flight of the Navy Flying Boat NC-4 and later equipped Charles Lindbergh’s "Spirit of St. Louis" airplane for his 1927 solo flight from Long Island to Paris. During World War II, Philip Jr. and his brother, Louis, expanded production of hose clamps for aircraft, tanks, trains and ships. In 1953, race car driver Bill Vukovich won the Indianapolis 500 race with an average speed of 128.7 miles per hour, thanks in part to the Ideal clamp. Today, every top race car competing in racing's "Triple Crown"—Indianapolis 500, Pocono 500, and Michigan 500—is equipped with Ideal hose clamps. The clamps also became ubiquitous in American households, used in refrigerators, air conditioning units, washing machines, garden hoses, boats and plumbing fixtures.

In 1971, under Philip Rauch Jr.’s direction, the company merged with the Parker-Hannifin Corporation, a Fortune 500 Company. There, he became the chairman of the board.

Supporting Lehigh and the Rauch Foundation

Throughout his life, Philip Rauch Jr. made a concerted effort to give back to his community, as well as the university that had enabled his success. Through his generosity, he has impacted students and faculty with many gifts that include supporting facilities, scholarships, the arts and athletics.

“Phil Rauch was a dear friend and colleague; we always saw eye to eye on Lehigh’s master plan. We were very instrumental in the relocation of the football stadium from the Grove to the Lower Campus,” said Murray Goodman ’48, generous Lehigh benefactor. The relocation of the football stadium allowed for the needed space to construct the Rauch Business Center on the corner of East Packer Avenue and Taylor Street, adjacent to Taylor Gym.

Rauch, who played football and wrestled during his time at Lehigh, was elected into the university’s Athletic Hall of Fame in 1999. He was also awarded the L-in-Life Award by the Lehigh Club of New York for his outstanding professional achievements and the Alumni Award for his loyalty and devotion to the university. Because running the family business did not make it conducive to return to Lehigh to finish his degree, which he finished at New York University, he was granted an honorary degree from Lehigh in 1979. He was also inducted into the National Wrestling Hall of Fame as an outstanding American, joining esteemed members Presidents George Washington, Abraham Lincoln and William Howard Taft.

In 1961, Rauch and his brother, Louis, started the Rauch Foundation, in Garden City, New York. The foundation’s mission is to invest in ideas and organizations that spark and sustain systemic change in the community, particularly related to early childhood development and environmental protection. The foundation works to strengthen the organizational effectiveness of nonprofit institutions that work on these issues through capacity building and leadership development.

“Over the past 30 years, the Rauch Foundation has expanded his philosophy by trying to create mergers and cross-sector coalitions on Long Island and in Maryland. Many of these efforts have met with huge success," said Rauch Douzinas.

Because the foundation primarily focuses on projects in the Long Island community, its support of Lehigh’s new Media and Communications Lab holds special significance. The Rauch name—a name that has become synonymous with success, generosity and a yearning for excellence—will long remain an essential part of the Lehigh legacy.

"My Great-Uncle Phil immensely appreciated Lehigh and the difference that it made in his life. He was proud to support Lehigh and would be happy to know that his foundation is continuing to provide learning opportunities for College of Business and Economics students,” said Kristi Miller Mahoney ’05, who followed in her great-uncle’s footsteps of giving back to Lehigh by establishing the Miller-Rauch Endowed Scholarship Fund. 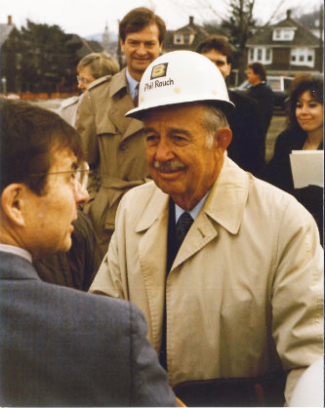 One of Lehigh’s most generous supporters, Philip Rauch Jr. ’33 appreciated what his Lehigh experience did for him personally and professionally. He showed that gratitude by providing for the Rauch Field House and the Rauch Business Center that included The Philip Rauch Center for Business Communications. The Rauch Foundation has recently provided a grant to establish the Rauch Media and Communications Lab to be located in a new College of Business and Economics building currently in the design stage. 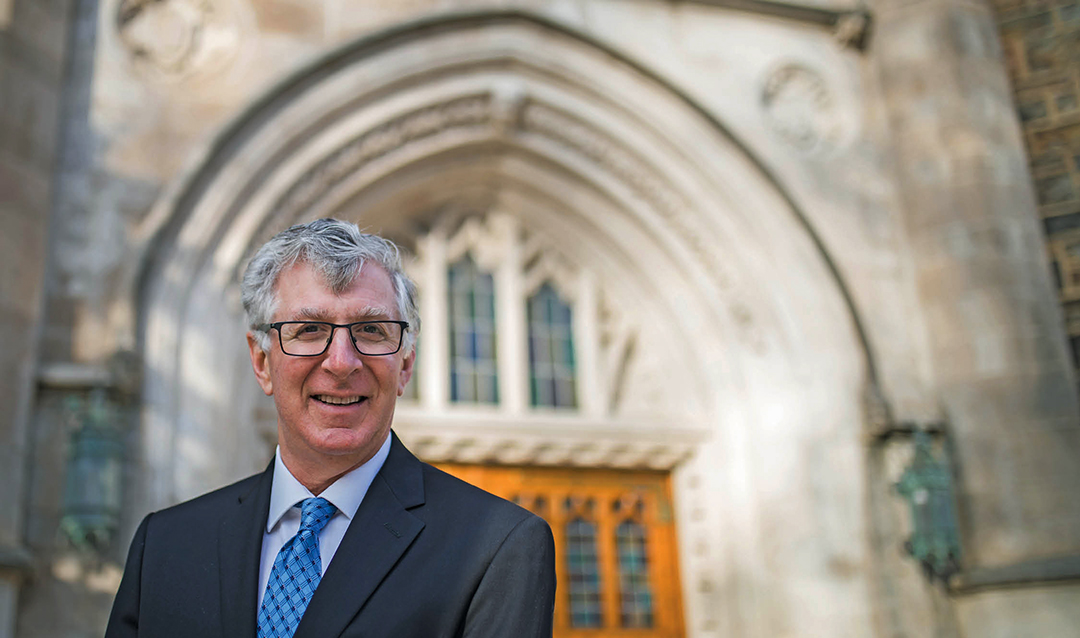 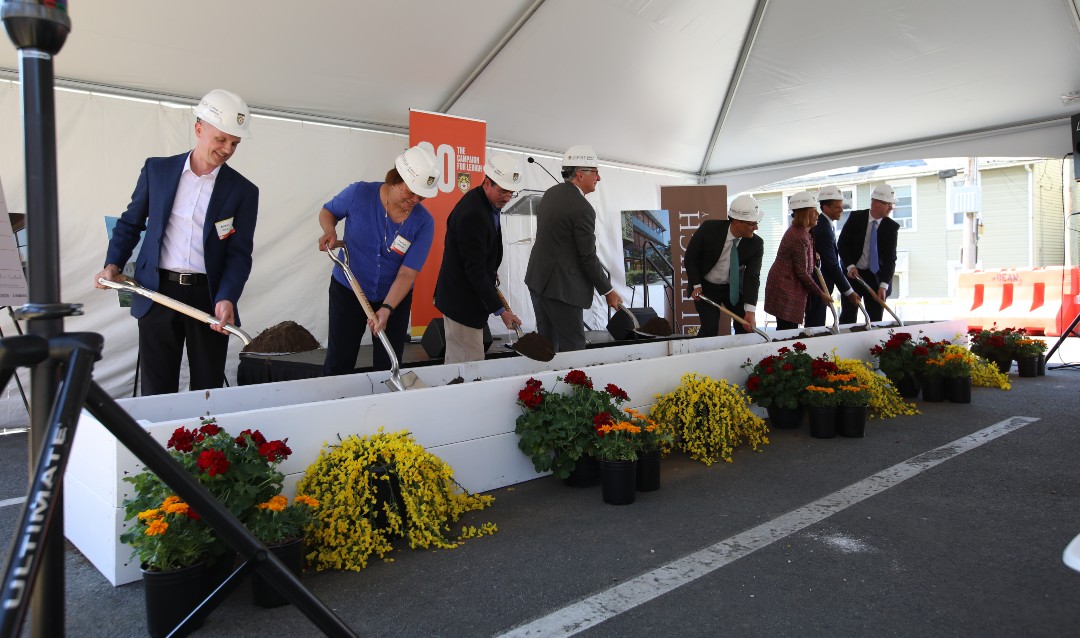 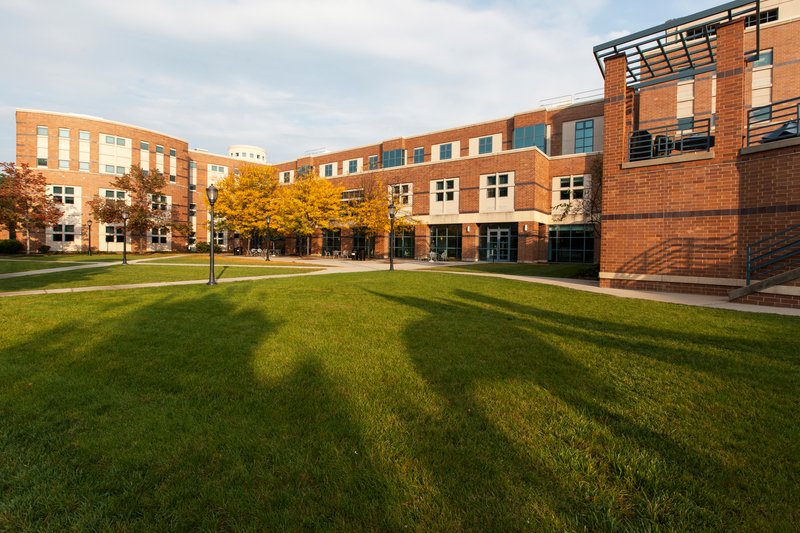