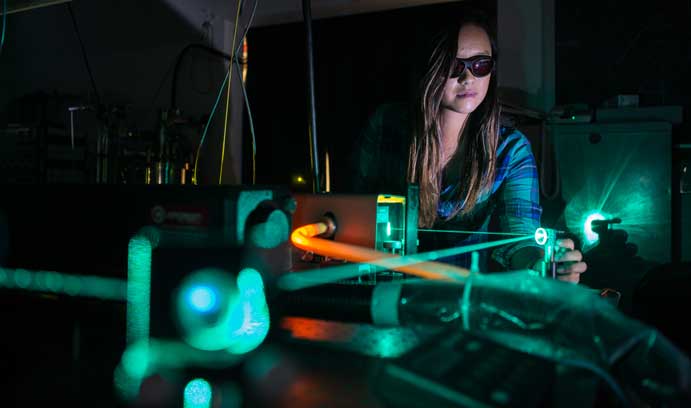 In her research, Courtney Au-Yeung shines diode lasers onto chalcogenide glass until the heat from the laser causes the glass to nucleate into single crystals. (Photo by Christa Neu)

Lehigh researchers made headlines several years ago when they fabricated a single crystal inside of a glass and demonstrated that it was capable of guiding light waves without significant losses. The achievement moved scientists a step closer to realizing the greater efficiency, faster speed and larger bandwidth of all-optical data transmission.

The group, led by Professors Himanshu Jain and Volkmar Dierolf and Adam Stone ’14 Ph.D., reported its results in Scientific Reports, a publication of Nature magazine.

As the group was conducting its research, Courtney Au-Yeung was working on a separate project in the Research Experience for Undergraduates program (REU) of Lehigh’s department of physics. The summer program allows selected students in the United States to conduct research with Lehigh faculty members.

Au-Yeung, then a student at Duquesne University, completed her B.S. in 2015. She then applied for and received a University Fellowship to pursue a Ph.D. in physics at Lehigh.

Today, as a member of Jain and Dierolf’s group, Au-Yeung is helping the group continue its progress toward all-optical data transmission.

Her efforts got a boost when she recently received a Graduate Research Fellowship from the National Science Foundation. The fellowships provide three years of support to graduate students working on research-based master’s and doctoral degrees in science, technology, engineering and mathematics (STEM) or in STEM education at U.S. colleges and universities. Of the more than 13,000 students who applied this year for fellowships, 2,000 received awards.

The goal of her research is to take the single-crystal waveguide that Jain, Dierolf and Stone created and learn to control the crystal’s orientation. This would enable researchers to create complex 3D crystal architectures that could enable high-density 3D optical memory and other applications.

“Having the ability to control the orientation of crystals created in glass can lead to major advances in optical communication and photonic integrated circuits (PICs),” Au-Yeung wrote in her application for the NSF Graduate Research Fellowship.

“These devices would have significant industrial impact because they are smaller, consume less energy, and are more reliable than the current technology…My goal is to gain complete control of the single crystal orientation.”

Au-Yeung conducts her research in two laboratories. In Lewis Laboratory, home of the physics department, she takes a sample of chalcogenide glass, a black opaque glass, and shines a diode laser onto it until the heat from the laser causes the glass to nucleate into single crystals.

During this process, Au-Yeung takes photos of the glass with a digital camera. She also conducts power-dependent studies to determine the optimal conditions for heating the glass. The key is to heat the glass enough to trigger nucleation but not so much that it melts.

“If we can do that,” she says, “we get a solid-to-solid conversion and the glass switches from an amorphous to a crystalline structure.”

Au-Yeung then examines the single crystals of chalcogenide glass with an optical microscope and a scanning electron microscope in the materials science and engineering department in Whitaker Laboratory. The SEM shoots a beam of electrons at the glass sample and collects diffraction patterns from the rebounding electrons. Au-Yeung uses a technique called Electron Back Scattered Diffraction to analyze the patterns and determine the orientation of the crystal lattices.

“The diffraction patterns show us angle data,” she says. “If you know the angles of the lattice structure, you can figure out the orientation of the crystal.”

Last spring, a paper which Au-Yeung helped write was published by the journal Crystal Growth and Design. Titled “Laser Fabrication of Two-Dimensional Rotating-Lattice Single Crystal,” the paper was coauthored with Jain and Dierolf and with Nobumichi Tamura of Lawrence Berkeley National Laboratory. Dmytro Savytskii, a research scientist in the department of materials science and engineering, was the lead author.

As an REU student at Lehigh in 2014, Au-Yeung worked with Dierolf on a project that involved doping gallium-nitride, a semiconducting material used in LEDs, with Rare Earth elements. The research project was Au-Yeung’s first, and it helped her decide on a career in research.

The REU program also gave Au-Yeung the opportunity to present posters at the Frontiers in Optics conference in Tucson, Arizona, and the Emerging Researchers National conference in Washington, D.C., and to give an oral presentation at the Undergraduate Women in Physics Conference at Rutgers University.

The dual nature of her Lehigh research—having one foot in physics and the other in materials science—appeals to Au-Yeung.

“Each of my advisers, Prof. Dierolf and Prof. Jain, represents a different discipline, so I feel like I’m getting the best of both worlds,” she says. “Also, this project is very visual. It requires us to make a lot of colored maps and images and to analyze a lot of quantitative data.

“I feel like I’m getting two subjects’ worth of experience.” 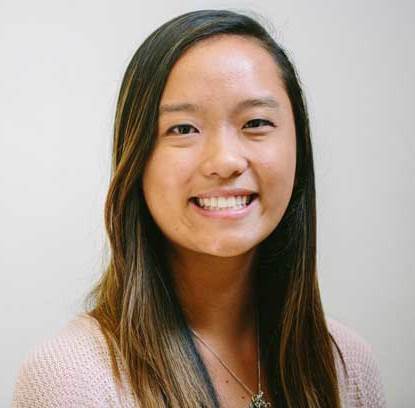