Perella to graduates: Know yourself, learn from others, and make the world a better place

In his address to Lehigh’s Class of 2016, Wall Street financier and philanthropist Joseph R. Perella ’64 recalled his unlikely journey from “Newark to Now,” and shared the life lessons he learned along the way to becoming one of the university's most respected and accomplished alumni.

Perella, a founding partner and chairman of the global advisory and asset management firm Perella Weinberg Partners, spoke at Lehigh’s 148th commencement to nearly 1,700 new graduates and thousands of supportive friends and family members. The ceremony was held Monday, May 23rd, in Goodman Stadium under clear and sunny skies.

After informally polling the graduates on their chosen college, Perella asked how many of the students had actually been enrolled in all three. “Experimentation in all three of the colleges is one of the things that got me here today,” he said, before detailing his circuitous path to success.

Growing up as the son of Italian immigrants, Perella said his parents set the gold standard for deferred gratification since all their efforts – and finances -- went toward educating their children. To acquire what he wanted, Perella caddied at Baltusrol Golf Course and worked for tips in the parking lot of a Union, N.J., nightclub.

While visiting the three colleges his high school guidance counselor identified as possible options, Perella and his father came to Lehigh. “I knew I wanted to come here the minute I stepped foot on this campus,” he said.

He entered in 1959 – the height of the Sputnik era -- and decided to major in engineering. Quickly discouraged, he then transferred to the College of Arts and Sciences, where he spent the next two years “unfocused, drifting and muddling through.” In what he described as the lowest point in his life, Lehigh, he said, “suggested that I stay home.”

“That was a wake-up call,” he said. “But looking back, Lehigh did me a huge favor.”

Perella spent the next year working in the accounting department of a local business and discovered he thrived in the environment. After earning the opportunity for a second chance from both his father and Lehigh, Perella returned to campus to study business, crammed five semesters into two years and graduated with the Class of 1964. “I discovered,” he said, “that the busier I was, the better I did.”

Perella went on to pass the CPA exam in 1967 and served as a crew chief on F-105 fighter bombers in the U.S. Air Force and the New Jersey Air National Guard. While in the service, he said he came to know two men on the flight line and hangar who had both gone to Harvard Business School.

Recognizing that it could be an option for him, Perella drove to Boston, went to Harvard’s administration office and sat in on a class. “I sat there listening, and my head exploded,” he said. “I said, ‘I’ve gotta do this.’ I ran back to the admissions office and said, ‘How do I apply?’ ”

Perella received his M.B.A. from Harvard in 1972, and within a year of graduating, he found himself specializing in mergers and acquisitions at First Boston, which would set the course for a stellar 44-year career that taught him several life lessons that he shared with the graduates:

Perella concluded by issuing a grand challenge to the Class of 2016: “When you get up tomorrow morning,” he said, “I want you to consider how you will make the world a better place.”

Perella was introduced by Mike Caruso ’64, who told the crowd that he was a freshman during Perella’s senior year at Lehigh. After listing Perella’s impressive list of professional accomplishments and his significant contributions to Lehigh, Caruso said that although they were both born in Newark and lived on the same street, they didn’t meet until after their Lehigh days.

“Our friendship has grown over many decades because of our mutual passion for wrestling,” said Caruso, who won three consecutive NCAA wrestling titles while at Lehigh. “Not only is it an honor to introduce Joe, but it’s a privilege to publicly tell him and the Lehigh community what a mentor and role model he has been to me. I’m certain that countless others can make that claim.”

A unique measure of intellectual engagement

In his first commencement as Lehigh’s president, John Simon said he would leave the dispensing of sage advice to Perella and focused instead on the unique characteristics of the graduating class. The most popular majors, he said, were finance, mechanical engineering, accounting and psychology. Collectively, he said, undergraduates chose “a staggering 70 different majors, a true reflection of the broad intellectual engagement of your class.”

He also spotlighted a broad range of accomplishments of the graduates, including rigorous academic accomplishments, awards, extraordinary volunteer efforts, and stellar dissertations.

“These are just a few examples of the broad excellence and numerous achievements of the students we see before us today,” he said. “My heartiest congratulations to each and every one of you on what you have accomplished here at Lehigh.”

The graduate student remarks were delivered by Belinda M. Waller-Peterson, a former labor and delivery room nurse who said, “I stand before you as the first African-American woman to earn an English PhD here at Lehigh.”

Although Barbados-born Ronald Williams paved the way for her in the 1970s, Waller-Peterson said that “two black doctoral graduates separated by three decades is not enough.

“Today, I ask that all of the graduate programs reaffirm their commitment to Lehigh’s mandate to adequately reflect the beautiful diversity of our world,” said Waller-Peterson, who will serve as assistant professor of English literature at Moravian College this fall.

Acknowledging that “we are all here because of the sacrifice and love shown to us,” she urged all the graduates to “reflect on all that you have accomplished here at Lehigh,” and to also take the time to “love on yourself, affirm your own strength and fortitude, to boldly proclaim that you reached the goal you set for yourself, and to prioritize your own happiness.”

Hold fast to this moment, she said, before speaking directly to fellow black and brown women graduates: “We are not the mules of the world. Embrace all of your intelligence, beauty and black girl magic. But above all, love yourself first and deeply. Class of 2016, we were made for this moment. Now let’s get in formation.”

The senior class remarks were delivered by Max G. DeZarn, the president of the Class of 2016 who earned a Bachelor of Arts in economics and political science. DeZarn, who will take a role as a financial risk analyst in the Cleveland office of the Great American Insurance Group, thanked the faculty who encouraged and inspired the graduates, the staff and administrators who worked to aid them in their voyage to develop into the best versions of themselves, the alumni for their continued support of their alma mater, and his classmates and fellow class officers for allowing him to serve as president over the past four years.

But he reserved a special thank you for his own parents, grandparents and sister, “who have sacrificed so much to provide me with such a wonderful opportunity – one that I recognize is afforded to all too few.”

In a humorous note, DeZarn drew on a notable event that took place during the Class of 2016’s first year at Lehigh.

“In what many are calling the greatest underdog story since Lehigh beat Duke in the NCAA basketball tournament back in 2012, I completed a mathematics minor in probability and statistics…. Okay, not many are saying that, but a few… So far, just me. CJ McCollum made Mountain Hawks everywhere proud that night, scoring 30 points on Duke. In that spirit, I scored 30 percentage points on my Stats exam. The similarities between the two events are uncanny,” he said to laughter.

He concluded with the words his own mother said to him every day before school for 13 years: “Go forth and be brilliant.”

Commencement day weather was sunny and comfortably warm………. (temps reached 70 degrees F by the 10 a.m. start of the ceremony) …there were 1,159 undergraduates in the Class of 2016…they hailed from 39 states and 16 countries….there were 519 students who received Master’s Degrees and 80 who received doctoral degree….the Class of 2016 included 109 international students from 27 countries outside the United States … for the fourth year, the commencement ceremony incorporated live video through two large-scale video boards on either side of the stage. Lehigh’s website also featured a social media grid that included celebratory tweets, real-time reviews of the commencement address and Instagram shots. New this year was a “What’s Next?” feature, which showed a series of images of graduates holding boards that detailed their future plans…. the ceremony began with a blessing from Rabbi Danielle A. Stillman, associate university chaplain and director of Jewish Student Life, and was followed by the national anthem, which was sung by Austin W. Keller ‘16 … Belinda M. Waller-Peterson ‘16G, delivered the Graduate Student Remarks, and Max G. DeZarn ‘16, president of the Class of 2016, delivered the Senior Class Remarks … Kira C. Mendez ‘83, outgoing president of the LUAA, welcomed the new alumni … the ceremony officially concluded with the ringing of the bell by representatives of the classes of 1966 and 2016 ... the benediction was offered by Reverend Allen J. Hoffa, director of the Newman Center and Catholic chaplain… the Allentown Band, under the direction of conductor Ronald H. Demkee, delivered their 35th consecutive performance at Lehigh’s commencement ceremony. It is America's oldest civilian concert band, with its first documented performance on July 4, 1828. 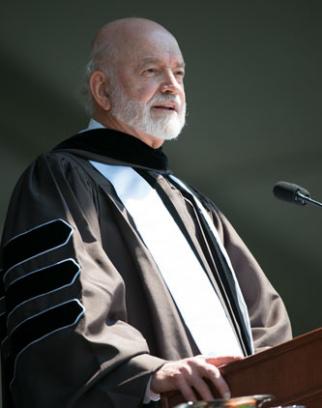 After graduating from Lehigh, Joseph R. Perella '64 would go on to earn an MBA from Harvard and build a hugely successful career on Wall Street. He encouraged Lehigh's newest graduates to strive for excellence in all that they do. 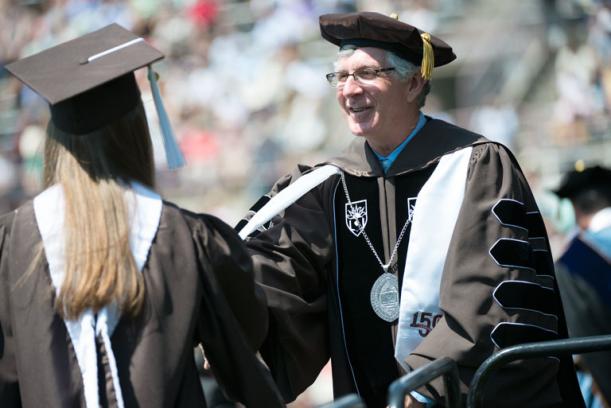 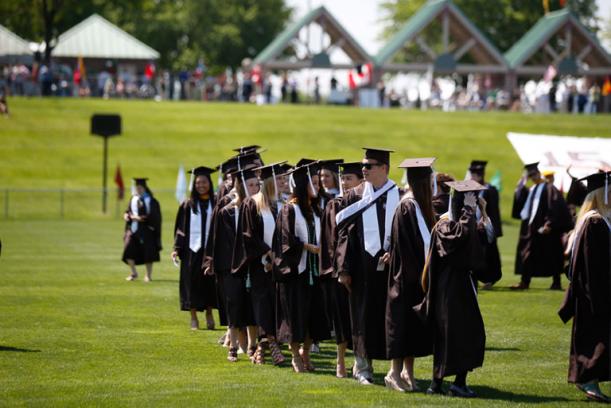 The graduates of the Class of 2016 pursued 70 different majors during their time at Lehigh. 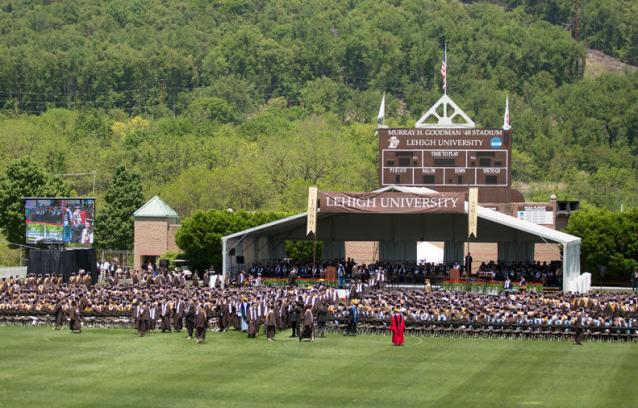 The ceremony was held on a beautiful late spring day at Goodman Stadium.