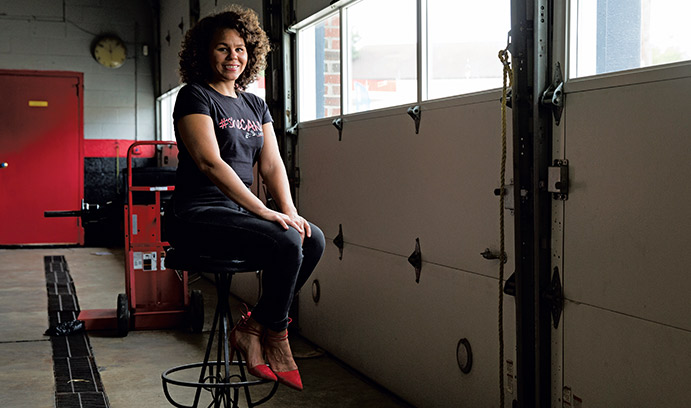 Patrice Banks didn't set out to disrupt the male-dominated auto repair industry, but she wanted to do something to empower women.

Patrice Banks is standing behind a table strewn with an assortment of car parts— rusty rotors, worn brake pads, dirty filters and frayed timing belts—at the edge of an oil-stained parking lot of an auto parts and service store outside Philadelphia.

Listening attentively and taking notes, a dozen women and one man who have signed up for her monthly Girls Auto Clinic stand in a half-ring in front of Banks. “They’ll up-sell you on everything,” Banks says about car mechanics and dealers. “They bank on us being uneducated consumers.”

There are murmurs, a few heads nod. A woman says a mechanic told her she needed a new catalytic converter. She shelled out $1,200, she says, “and it still did the same thing.”

Banks asks her several questions about the car’s problem.

“I can tell you it wasn’t the catalytic converter,” Banks says.

Banks, a 2002 Lehigh materials science and engineering graduate, is also a certified mechanic. She now stands on the precipice of success. Investors are talking to her about taking Girls Auto Clinic national with franchises. The self-published auto repair guide that Banks wrote for clinic participants has been picked up by Touchstone Books, an imprint of Simon & Schuster.

Since launching Girls Auto Clinic in the Philadelphia area two years ago, Banks has gotten a flurry of media coverage, including O magazine in July. She garnered attention after she wrote an op-ed piece for The Washington Post about quitting her six-figure job at DuPont to launch the women-only clinics, which she views as a way to empower women.

She is also finally about to realize her dream of opening an all-female auto repair shop in Upper Darby, outside Philadelphia. When completed, it will be staffed by women mechanics and include a nail salon and a place for children to play.

Banks says she was once like the women who attend her clinics, one of the millions of women who know nothing about their cars. Even with an engineering degree, she didn’t know how to pop the hood on her car. She panicked when a dashboard light appeared. A trip to the mechanic made her feel powerless and vulnerable—she didn’t know whether they were telling her the truth about her car.

“I felt like I needed a guy to help me,” she says.

So how did this Lehigh engineering graduate get here?

By any measure, Banks was already a success. The first in her family to graduate from high school and college, she landed a high-paying job at DuPont running her own lab as a failure analyst.

But the road to achieving those successes was anything but guaranteed.

Banks faced challenges growing up poor and biracial in predominantly white, blue-collar Phoenixville, about 30 miles west of Philadelphia. The daughter of a single mother, Banks looked to school and the stable influence of her grandfather, who would often help her family buy food and drive them because her family didn’t own a car. Her mother, who worked various jobs as a line cook, factory worker and secretary, told her education was the ticket to a better life.

“Life was kind of chaotic and I wanted to fix things, whether people or broken electronics,” Banks says. “I wanted to make things better or make things work. I think that ultimately pushed me into engineering.”

Banks was an AP and honors student at Phoenixville High School, where she excelled in math and science. She liked solving problems. For a while, she considered studying psychology, but her mother suggested engineering because she liked science.

“I didn’t know what engineering was,” she says.

She would soon learn. Banks recalls the time as a sophomore she spent a day shadowing an industrial engineer. He was African American and he would serve as a role model for the kinds of occupations to which she could aspire. Wearing a hard hat and safety glasses, Banks watched as the man sold equipment to mid-sized businesses that made a variety of machinery.

“I was like, I can do this. It was helping people solve their problem. I was just drawn to that. That’s when I said I’m going be an engineer,” Banks says.

Banks applied to Drexel University to study engineering, but at the last minute, her guidance counselor suggested she consider Lehigh. Banks was invited to attend an event that weekend at Lehigh for prospective minority students. She had never left Phoenixville, but she dropped everything to attend.

Her grandfather drove her to Bethlehem, and the weekend at Lehigh turned out to be a revelation, she says. For the first time in her life, she was among dozens of students just like her who were passionate about learning. She went to parties where people talked about poetry and sang. And she marveled at the campus’s bucolic beauty.

From that point, she knew she wanted to go to Lehigh.

At Lehigh, Banks initially chose to major in chemical engineering “because they make the most money out of college,” she says.

“When you’re poor growing up, your main goal is to make money and buy things you need.”

But she couldn’t forget Professor Richard Vinci’s presentation about materials science in Engineering 101, a class where prospective majors learn about the specialties.

“He had amazing examples. He talked about materials and how they affect our everyday lives,” she says.

One month into her chemical engineering major, Banks switched her major to materials science and never regretted it.

When she graduated, she had a job waiting for her at DuPont in Wilmington, Del. At DuPont she ran a lab where she determined the root causes of breakdowns in materials and calculated the cost of repairing them. But after six years, she became restless, tiring of corporate life and the long hours. She wanted to do something else, something of her own.

Banks says she hadn’t set out to disrupt the male-dominated auto repair industry, but wanted to do something to empower women. She hit on the idea of starting an all-female auto repair shop while scouting for ideas on her blog. She asked women what skill they most wanted to have but had to pay a man to do.

Just as she had been trained to do as a failure analyst, Banks located the root cause of failure in the auto repair industry—a lack of women working in the field— and found a solution.

Car repair is a “pain point” for women, she says, borrowing a term used in business. And it was one that resonated with her, too. The auto industry has not traditionally been a culture that welcomed women, she says.

“I just saw an incredible opportunity that could change an industry,” Banks says.

Banks encountered a major hurdle on the way to executing her idea of starting an all-female auto repair shop: “I couldn’t find a female mechanic near me. I couldn’t find anyone.”

If she wanted female mechanics, she realized she’d have to become one herself and then teach others. While still working at DuPont, Banks enrolled at Delaware Technical Community College and took classes at night.

After Banks graduated, she was turned down three times by mechanic shops, even when she told them she could offer expertise in engineering and business and would work for free.

“Imagine a 25-year-old woman with a child without all this experience,” Banks says. “People think we’re too cute or don’t want to get our hands dirty.”

Nearly two hours have elapsed as the Girls Auto Clinic heads into its final stretch. Banks, her hands filthy, shows the group how to clean the dipstick to check their car’s oil level.

One of the women admits that until today, she, too, didn’t know how to pop the hood on her car. But like others, she feels no shame today. Banks has created a safe environment.

The clinic has concluded and Banks stops to pause and reflect.

“I knew I’d have a business that was going to reach as many women as possible,” she says. “I never dreamed it would have this type of attraction.”

NPR: Girls Auto Clinic Owner: 'I Couldn't Find a Female Mechanic, So I Had to Learn'