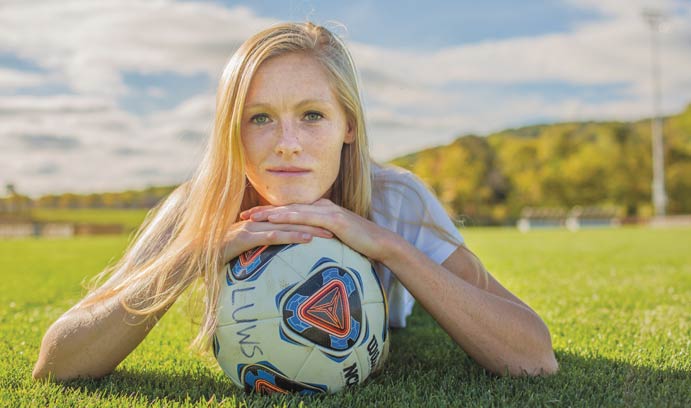 WHAT I LOVE ABOUT SOCCER I started playing when I was 4 or 5 in the rec leagues. I loved running, and there’s a lot of running in soccer, so that was a good way to get energy out. It sounds silly, but soccer’s just different because you use your feet, and that was always something that was fun because it’s not like any other sport. Now I love the team aspect of it.

WHAT I DON’T LOVE ABOUT IT The most frustrating part is when your team is possessing more than the other team and doing well, but you get that one fluke play and they get their one chance on goal and they score when you’ve been dominating the whole game.

BIGGEST ACHIEVEMENT Hopefully my biggest achievement will be winning the [Patriot League Championship] this year.

BETTER FEELING: SCORING A GOAL OR MAKING A GREAT DEFENSE PLAY TO PREVENT ONE Scoring is something that, as a defender, is less likely to happen, so that’s pretty cool. But it’s more dependent on the situation of the game. If we’re up 1-0, it’s more important to make the defense stop so they don’t tie the game, but if it’s 0-0 and you score to win the game, that’s awesome.

MY FAVORITE PREGAME MEAL I would never play a soccer game if I hadn’t eaten a banana right before. I’ve gotta have one that day at least. I’m a huge Goldfish fan, so sometimes if I don’t feel like I’ve had enough food before a big game I’ll snack. I always keep a bag of Goldfish in my bag. Ten minutes before we warm up I have a couple handfuls of it. Most people on my team know me for my Goldfish. The original flavor, by the way, not cheddar.

I WATCHED THE WOMEN’S WORLD CUP FINAL At my house. My family is a huge soccer family. My parents never really played but my dad wished he could have. My brother is not very coordinated but he loves it. We just got together as a family and watched it at our house.

IF I DIDN’T PLAY SOCCER, I’D BE PLAYING Volleyball. I think it’s a cool team sport, and I’m pretty tall, so I would have been good at it, maybe? I like the team dynamic.

MY FAVORITE ATHLETE IN ANOTHER SPORT IS Peyton Manning. He’s such a good quarterback, and he cofounded the gym I work at back home. He comes back to Chattanooga for a week or two in the summer. We’re not tight or anything, but we’ve worked out at the same time. I try not to bother him, but it’s kind of cool to see him working out the same way I am.

MY LEADERSHIP STYLE IS Leading through my actions. I like to get things done and do the right thing and help out when I can. I’ll help the freshmen pump up the balls, and if we need to have cones out or pick up cones I’m the first one to start getting ready. I have a really good work ethic, so hopefully people pick up on that energy and do the same. I'm vocal on the field but I'm not one of those people who gives huge pep talks.

MY HEROES ARE My parents are huge heroes for me. They both work super hard. My dad’s a chemical engineer and did a lot of sports when he was growing up, so I’m kind of like the girl version of him. He's a chill guy, but at the same time if something needs to be done or if he needs to speak up about something, he'll do it. But he does it in such a calm manner. 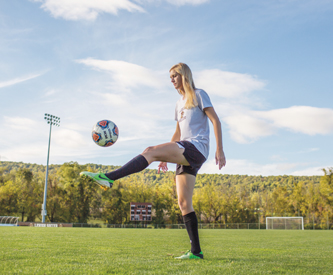 Elliott started playing when she was 4 or 5 in the rec leagues.