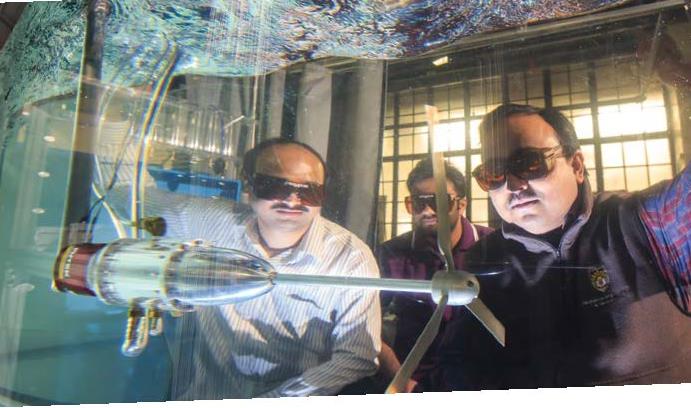 In one of their projects, Banerjee (right) and his students investigate Rayleigh-Taylor instabilities, which hamper efforts to generate fusion energy on an industrial scale.

The first job Arindam Banerjee took after graduating from Jadavpur University in Calcutta was with Tata Motors, one of India’s largest automobile manufacturers.

It changed the course of his life.

Banerjee was one of a small group of engineers chosen by Tata to receive Six Sigma quality management training. Soon the skills were being rolled out company- wide. One afternoon, the Six Sigma instructor was not available and Banerjee was tapped to teach the session.

“I was called in with 15 minutes’ notice to teach a room full of senior executives,” Banerjee recalls. “I had never been as comfortable doing something as what I experienced in the next four hours. I quickly realized there were not enough challenges the company could offer me with my limited knowledge.”

Banerjee, son of a University of Calcutta professor, knew teaching was in his blood. He earned a Ph.D. at Texas A&M, did a postdoc at Los Alamos National Laboratory in New Mexico, and taught at the University of Missouri-Rolla before arriving on South Mountain in 2012.

Today, as P.C. Rossin Assistant Professor of Mechanical Engineering and Mechanics, Banerjee is gaining renown in the field of fluid dynamics. Last spring he received the NSF CAREER Award to study the physics of mixing molten metal plasma and hydrogen gas in the fusion process.

Banerjee, who leads a group of seven graduate students and several undergraduates in the Turbulent Flow Design Group, exemplifies the teacher-scholar model that NSF promotes. He recently received the Joel and Ruth Spira Excellence Award in Teaching from the engineering college.

“All great researchers,” he says, “are great teachers. If you do not have a passion for discovering new things, you will not have a real passion to teach.”

In his research, Banerjee studies Rayleigh-Taylor instabilities, which hamper efforts to create fusion energy on an industrial scale.

Fusion, the process by which the sun creates energy, “has been the next big thing for about 30 years,” Banerjee quips. He conducts experiments to simulate the mixing that occurs when metal spheres filled with hydrogen are irradiated by lasers to trigger fusion. However, surface imperfections on the metal surface give rise to hydrodynamic (Rayleigh-Taylor) instabilities that allow the gas to escape through the metal.

“It’s a timing issue,” says Banerjee. “The instabilities do not allow the time it takes to attain fusion burn by rupturing the metal shell due to the mixing process.”

Banerjee and his students use a pair of rotating cylinders containing a test section full of materials that simulate the densities of gas and molten metal at high speed, then reverse gravity to cause mixing. Lasers and fast cameras capture a detailed view of the flow.

“We use a large number of fluid combinations to explore hydrodynamic conditions that may be prevalent at extreme temperatures and pressures,” he says. “One particularly interesting combination is Hellmann’s Real Mayonnaise. It turns out that it has very similar elastic-plastic [non-Newtonian] properties as plasma does at high temperature and pressure.”

The results of these experiments, which are also supported by the Department of Energy, can shed light on the complex hydrodynamics and mixing processes for inertial fusion. The results also feed into research at the Los Alamos and Livermore National Laboratories that collect data to model the mixing, nuclear, heat transfer and other processes that affect fusion.

Banerjee is also interested in harvesting renewable hydrokinetic energy from rivers, tides and ocean waves. He uses a large flow channel to understand the challenges of this potentially huge energy source.

“The U.S. could harvest enough energy from rivers and tides, at 30 percent efficiency, to meet one-third of its electricity demand by 2030,” he says. A number of demonstration turbines have been deployed, he says, but hydrokinetics has so far contributed little energy to the grid.

Because the impacts of turbines on U.S. rivers and coasts aren’t well known, it can take three to five years to obtain the permits necessary to put a turbine in service. By studying flow effects in the lab and computationally modeling real-world conditions, Banerjee’s work could help smooth public acceptance of this technology.

Students play a large role in his projects, says Banerjee, because he believes “it’s important for them to get into the lab and get their hands dirty.

“In the lab, there is always in the beginning a fear of the unknown, because there are no fixed answers to experimental problems. But as they start realizing that they have the freedom to approach it however they want to, I see them flourish.”