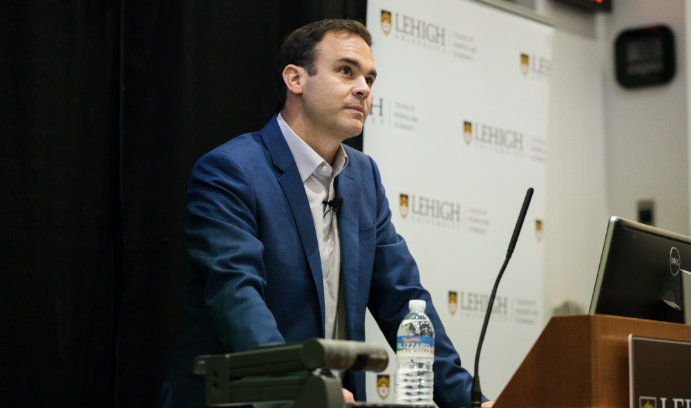 New York Times business reporter David Gelles delivers one of two keynotes at the 2018 Impact Symposium co-sponsored by Lehigh’s College of Business and Economics and the Center for Ethics.

Nike was thrust into the middle of the culture wars a few weeks ago, when it made former NFL start Colin Kaepernick the face of its “Just Do It” 30th anniversary campaign.

Should Corporate America be trying to set social policy?

“Companies can no longer afford to sit on the sidelines when it comes to the hot button issues of the day,” said New York Times business reporter David Gelles, delivering a keynote Friday (Sept. 21) at the 2018 Impact Symposium co-sponsored by Lehigh’s College of Business and Economics and the Center for Ethics.

“On topics ranging from climate change to health care, gun laws to birth control, the biggest brands in the country are being forced to take a stand,” he said. “It’s hard to state what an abrupt change this is. Until recently, companies avoided controversy at all costs. But these days, they are confronting it head on, sometimes even embracing it when it arrives unexpectedly, and in rare instances, seeking it out.”

Gelles was one of two keynote speakers at Lehigh’s fifth annual impact symposium, “When Business Meets Social,” which explored “Leading in Times of Change: Connecting Business and Social Movements.” The daylong symposium, held in the Perella Auditorium in the Rauch Business Center, brought together business leaders, educators, students and members of the Lehigh community with the aim of fostering conversations around workplace challenges and opportunities stirred by recent social media movements.

Tyi McCray, interim director of diversity and belonging and diversity strategy lead at Airbnb, opened the symposium with a keynote on “Mitigating Bias and Creating Space for the Expression of Divergent Perspectives.” Two panel discussions rounded out the presentations and conversations.

“When we walk into the workplace, none of us are objective observers of the world,” said McCray. “We’re all filtering information with unconscious bias, past experiences, our personal identities. We’re all dragging that into the workplace, invisible luggage behind us. And it affects how we show up and interact with people. And the better we understand it, the better we can engage and have dialogues and cross references.”

McCray led attendees in an Implicit Association Test, which is intended to measure unconscious bias by associating gender with fields of study or occupations. Studies show that 70 percent of people more quickly associate men than women with the field of science, she said, while 75 percent of people have an implicit bias for white people over black people. Those biases are often reinforced in culture, she said, whether through a character on a TV show or other imagery.

“We have to recognize this invisible smog that we all breathe in,” she said.

In the workplace, bias could show up in performance reviews and promotions. A study that looked at the language used in job reviews found that women more often than men got personality feedback in their job reviews, she said, and often it was negative terminology such as “abrasive” or “aggressive.”

While everyone has unconscious biases, McCray said however, there are strategies to mitigate them, including not moving the bar while evaluating. She said managers should determine relevant criteria in advance, create a grading criteria for evaluations, write specific structured feedback and discard unnecessary criteria.

She talked about the strategies in place at Airbnb to mitigate bias, including pay equity analyses, manager trainings and efforts in performance reviews. She said the company’s future depends on diversity and inclusion. The company doesn’t want to be reactively inclusive, she said, but instead, pro-actively inclusive.

Gelles took the podium in the afternoon and directed the audience’s attention to business leaders and their role in taking positions on social issues such as LGBT rights, sexual harassment, racism and gun violence. Between today’s tumultuous political environment and reactionary online interactions, he said, company executives are forced to make their positions known to stay competitive.

“To state the obvious here: Business and politics don’t always mix,” Gelles said. "But being a chief executive no longer means just running a profit and loss statement. It means being prepared to articulate your values—and your company’s values—when you least expect it.”

This behavior comes from the expectations of customers and employees, Gelles said. According to the Edelman Trust Barometer, 84 percent of Americans think CEOs should inform public policy debates, while 56 percent said they lack respect for CEOs who don’t speak up on pressing issues. A separate Weber-Shandwick study found that half of consumers would be more likely to buy from companies who do speak up, and that employee loyalty increases when CEOs take a stand.

When companies take a stand on hot-topic issues, they can have a significant impact on their communities, Gelles said. For example, an Indiana law passed in 2015 would have made it easier for religious conservatives to refuse service to gay people. In response, Marc Benioff, founder and CEO of Salesforce, canceled its statewide events and threatened to relocate. Politicians, including then-governor Mike Pence, backed down.

“When CEOs speak out, the world listens,” Gelles said. “Sometimes, policies even change.

"Once Salesforce took a stand in Indiana, other leaders joined the protest, including the head of the N.C.A.A., who said the college athletics group might move its headquarters out of Indianapolis.”

Gelles said this shifting business culture is trickling down into university curriculums, with discussions held in business classes on “bro culture,” sexual harassment, and sexism and free speech. Schools are beginning to emphasize the behavioral and psychological aspects of interaction in the workplace.

The same can’t be said for the upper echelons of government, however. Gelles said the combination of business and politics came to a head during the August 2017 protest in Charlottesville. Ken Frazier, CEO of pharmaceutical giant Merck & Co., resigned from President Trump’s manufacturing council after he blamed the violence “on both sides.” Ten additional members left the council following Trump’s remarks.

Gelles said business leaders “speak to our common humanity” and demonstrate moral leadership when there’s a severe lack of it in Washington. 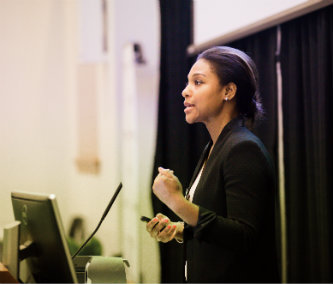 Tyi McCray, interim director of diversity and belonging and diversity strategy lead at Airbnb, opened the symposium with a keynote on 'Mitigating Bias and Creating Space for the Expression of Divergent Perspectives.' 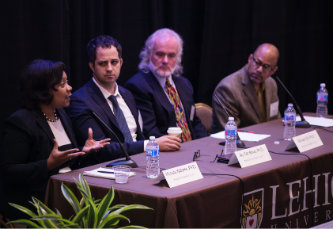 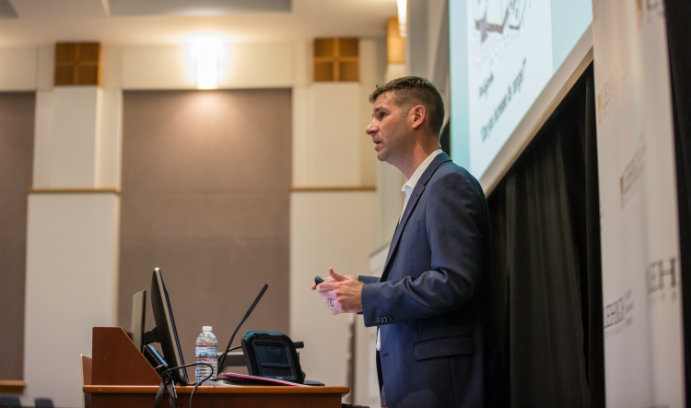 Privacy and Security in the Era of Big Data

College of Business and Economics focuses on data privacy and security issues at its annual impact symposium.