From Mountaintop to Mars 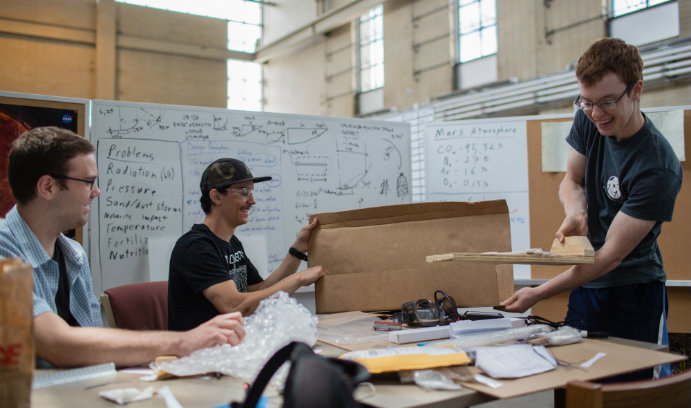 Kevin Augustyn ’17, Aidan Din ’16 and Aaron Sandoval ’17 build a box for use in UV light testing of the materials they've chosen for their extra-terrestrial greenhouse.

It isn’t easy to cultivate a garden on Mars.

With an average temperature of minus-80 degrees Fahrenheit, the presence of harmful solar UV radiation, an extremely thin atmosphere, frequent dust storms and meteorite impacts, Mars isn’t particularly hospitable to plant life. But in order for a manned mission to Mars to occur in the future, space travelers will need a sustainable food source.

Kevin Augustyn ’17, Aidan Din ’16 and Aaron Sandoval ’17 would like to design a greenhouse that can make that possible.

“In order to be most efficient, [astronauts will] need to supply their own food on site instead of sending it from Earth,” says Sandoval, a mechanical engineering major also pursuing minors in aerospace engineering and astronomy. “So we need to develop an environment in which we can grow food that will supply adequate nutrition and enough energy for future astronauts.”

Staple crops such as wheat, corn, sweet potatoes, lettuce and soybeans tend to thrive here on Earth. But in the extreme conditions of Mars, they would require special accommodations.

“[NASA has] had multiple contests to try to find solutions to this, and they’ve identified a lot of problems and come up with some solutions but no overall design has been created yet,” says Augustyn, a civil engineering major who became interested when he read an article about the problem last year. “[We were] thinking that we could help expand the information available to [NASA] and possibly come up with a solution to the issues they’ve been having.”

“Once they saw what the topic was, we had about 50 students apply,” says Hart.

Din and Sandoval were selected from the applicant pool to join Augustyn on the team. Once they got started, Quiel provided guidance in the process of conducting such a large-scale, long-term research project, something none of the students had previously undertaken. Hart, Quiel and Vermaak have provided ongoing support. The project, however, belongs to the students. No one is telling them what to do.

“I’m not sure we know what to do,” says Hart with a laugh.

“[The mentors have] definitely played the role of advisors and not necessarily as extra team members, which I think is a good thing in this case,” says Din, a materials science engineering major also working on an aerospace engineering minor. “They’re there for support if we need them, but they’re not here telling us what we should be working on or what we’re doing right or what we’re doing wrong in the small scale. They’re not really trying to micromanage us, but they’re still definitely available whenever we have questions.”

“I like the opportunity with Mountaintop to not only connect with the students but to also connect with other faculty to try something different,” says Quiel. “I wouldn’t have tried this on my own, so I definitely credit Kevin with setting the momentum for something like this.”

It didn’t take much research for the team to realize the enormity of the problem they were taking on. They decided to narrow their focus to the design of a greenhouse prototype.

Students started by researching other projects that have tackled the issue of extra-terrestrial greenhouses. They’ve also explored existing mechanical research on materials they might use to address the challenging conditions of Mars.

“A lot of problems in the aerospace realm often come down to materials,” says Vermaak. “Materials can limit or direct what’s possible. And so what the students are also finding is that they have to investigate the materials available, maybe use materials in unconventional ways and find ways to compare materials.”

For an extra-terrestrial greenhouse, the materials must be lightweight, as it costs $10,000 per pound to send items to the International Space Station: “Multiply that by 100 if you’re going to take it to Mars,” says Hart.

Materials must also be transparent enough to allow light to get through to the plants and strong enough to withstand UV radiation, meteorite impacts, dust storms and the difference in internal and external pressure.

Students are exploring the possibilities of an inflatable or rigid design. They will perform a variety of mechanical tests on their selected materials, including tensile testing, puncture testing, and impact and abrasion testing to simulate dust storms and meteorite impact.

“The main challenge of all these materials is that there’s a trade-off for the most part, so one thing will perfectly fit a certain parameter but will be worse in another,” says Din. “It’s kind of a balancing act of trying to find the right material that will work in this application.”

The team hopes to then carry their research past the summer, as the project has the potential to become even more interdisciplinary. Students might develop more detailed parameters for how a mission might be carried out and delve more deeply into plant biology to plan more specifically for different plant environments.

In the thick of a summer at Mountaintop, the possibilities are endless.

“There’s all different ways they can go with this,” says Hart. “There’s potential to hook up with NASA downstream, too, to write proposals that NASA may support in the future on the same topic.”

Right now, students are immersed in an environment that allows them to focus exclusively on the problem they’re trying to solve, free from the everyday responsibilities of student life.

“[This is] a low-risk opportunity, an incubator opportunity, essentially,” says Quiel. “Without [Mountaintop] there would be very few mechanisms to be able to do something like this.”

“Initially it just seemed like a fun idea, it seemed interesting to me,” says Din. “But having gotten into the process, it’s really a unique experience, especially for undergraduates. It’s nice to be able to completely take control of a project and feel responsible for it.”

“I really like the setup for this research, how we’re allowed all the freedom that we have,” says Sandoval. “I hope to work at NASA in the future, so working on projects like this is very relevant for my career goals.” 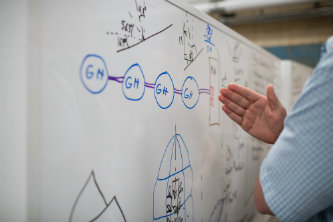 An extra-terrestrial greenhouse would provide future travelers to Mars with a sustainable food source. 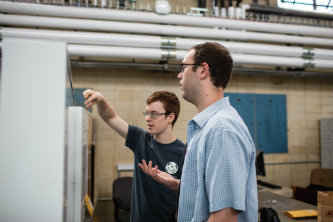 Augustyn (right) proposed the Mountaintop project to professors Terry Hart, Spencer Quiel and Natasha Vermaak. “[We were] thinking that we could help expand the information available to [NASA] and possibly come up with a solution to the issues they’ve been having," he says.