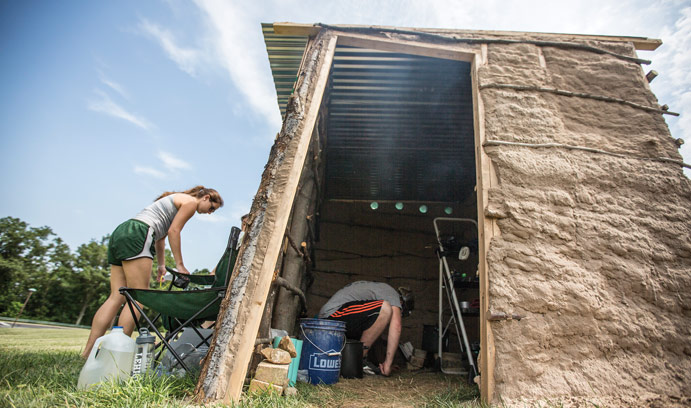 A group of students painstakingly built a 6-by-8-foot mud hut on the grounds outside Mountaintop’s Building C this summer for their research into ways to reduce the indoor air pollution plaguing parts of the developing world.

To make the replica of a cooking hut typical of a rural Ugandan community, they dug holes in the rocky soil to anchor wood posts, as well as toted fallen limbs from nearby woods to weave the hut’s frame. With their feet, they mixed clay, sand, water and sawdust in a kiddie pool to make cob for the walls, which they built by hand. Later, they boiled water over a wood fire inside the hut to measure the amount of black carbon released in the air.

Steps away, inside Building C, other teams of students tackled a host of different projects. One group hauled old distillery vats to the site and built a system for aquaponics, a soil-less, water conserving food production system, where they grew lettuce while cultivating tilapia. Another team designed and 3-D printed prototypes of hand exoskeletons to help kids who suffered strokes to regain movement. Another group made robots and apps as they researched ways to create “Smart Spaces” that anticipated people’s wants and needs. Two other groups set out to make documentaries.

“That’s the way everyone’s learning up here—by doing,” said David DiFrancesco ’16, as he surveyed the cavernous room mid-summer. He was part of Project Mathete (pronounced MAH-theh-teh), which set out to explore and to demonstrate how students learn best. “So we kind of theorized, everything that everyone learns up here, they’re going to remember for a long, long, long, long time.”

What began with a handful of ventures in 2013 took off this summer, as the Mountaintop experience provided a larger number of students with the freedom—and space—to explore, discover and collaborate on more than 20 projects across all disciplines. The university plans to offer the program year-round beginning next summer.

“The biggest change is a matter of scale,” said Alan J. Snyder, vice president and associate provost for research and graduate studies. “What we saw this year was a huge step toward what we envisioned from the start.”

Students were given the liberty to define the scope of their projects, to take risks intellectually, to make mistakes, and to change course. As in the initial year, there were no assignments, no grades. Faculty mentors focused on coaching and supporting students in the process of discovery. Not only were students able to collaborate with fellow students on their multidisciplinary teams, but they were also able to brainstorm with students from other projects and turn to any faculty member for guidance.

“One of the most exciting aspects of Mountaintop is that it provides an opportunity for hands-on learning and putting ideas into practice," said Michael Spear, assistant professor of computer science and engineering and a Smart Spaces mentor. "In the classroom, it's easy to overlook how much of a problem has already been defined, designed, and solved, before students even read the assignment. At Mountaintop, students do all of the initial work, instead of just producing the end result."

Some teams saw their projects go in different directions than first envisioned. The students who devised exoskeletons for rehabilitation originally planned on creating prosthetic hands. When consultations with Good Shepherd Rehabilitation Hospital revealed a lack of assistive devices for rehabilitation, they shifted direction to have a greater impact.

“If we want students to succeed at things we haven’t thought of,” said Snyder, “their success depends upon their ability to observe, pose questions, and explore possibilities on their own. We want them to become skilled at independent inquiry and discovery.”

As a measure of the impact on students, several teams will continue their work beyond Mountaintop. GR2OW members, who aimed to change the way Lehigh gets rid of its food waste, will expand their composting efforts and establish a student club. The Lehigh Aquaponics team is looking to perhaps partner with other sustainability groups on campus and pursue a provisional patent on equipment.

AT A GLANCE: THE 2014 MOUNTAINTOP PROJECTS

Students built a cooking hut, similar to what is found in Uganda, for their research into ways to naturally ventilate huts and reduce the indoor air pollution plaguing much of the developing world. Wearing face masks to protect themselves from harmful matter, the students boiled water over a wood fire inside the hut, then used hand-held black carbon monitors to measure the level of black particles released into the air with, and without, ventilation. “When you breathe in black carbon, this tiny particulate matter, it causes respiratory disorders or it triggers respiratory problems, like asthma attacks,” said mentor Breena Holland, associate professor of political science. The project, an engineering and social science research initiative, also examined social issues that lead families to burn wood for fuel.

Using former distillery vats that they hauled from New Jersey, the Lehigh Aquaponics team developed an educational, soil-less food-production system in which they grew lettuce while cultivating tilapia. “The ultimate goal,” said Alex Derish ’15, “is to remotely drop the tanks in an environment that wouldn’t otherwise be able to produce food.”  The students hoped to educate people not only on how to use their system but also about the benefits of aquaponics, including reductions in land and water usage.

RACE AND DIVERSITY AT LEHIGH

The Engineering Equality project team focused on producing a documentary that would explore race relations at Lehigh University in the last 50 years. Producers delved into historical resources to help tell the story. “We’re hoping that Lehigh sees there has been progress, but there’s more progress that can be made, and that progress is achievable,” said Paul Lyons ’16. “Our end goal is to inspire.”

GR2OW, or the Green Resource Recovery of Waste, aimed to turn Lehigh’s food waste into compost that can be used to fertilize greenery and other plant beds on campus. To that end, students composted about 450 pounds of food waste, mostly from Lehigh’s Brodhead Student Restaurant, at the Lehigh Community Garden on the Goodman campus. In fall, team members will expand their composting efforts, establish a student club and work as sustainability interns. “It matters on a big picture level,” said Tori Wiedorn ’17, “because we’re not going to survive if we don’t change how we do things, if we don’t change how we do waste.”

For a cluster of students, it was all about “Smart Spaces”—how to track people’s movements, anticipate people’s wants and needs, save energy and build and operate robots that can help people in need. Smart Spaces also was a site for the National Science Foundation’s Research Experiences for Undergraduates (REU). As part of the projects, students were developing a low-cost interactive robot they called LILI (Lehigh Instrument for Learning Interaction) for use for research with autistic children. Others worked on technologies that can be integrated to create Smart Spaces, such as a poor man’s bar code for helping people keep track of items in their home.

Using 3-D printing, a team of students created prototypes of hand exoskeletons for possible use in pediatric rehabilitation. In collaboration with Good Shepherd Rehabilitation Network, the students designed and created the low-cost exoskeletons with the aim of helping children who lost muscle control in their hands, possibly from strokes. “An exoskeleton can go around the hand and facilitate some kind of movement in hopes of molding the brain to relearn the movements that the hand does,” said Elena Ramirez '15, one of the students on the team. 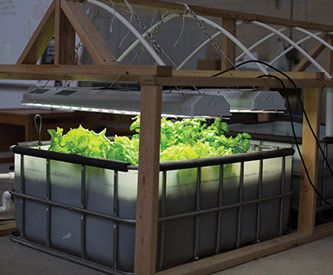 The Lehigh Aquaponics team developed an educational, soil-less food-production system in which they grew lettuce while cultivating tilapia. 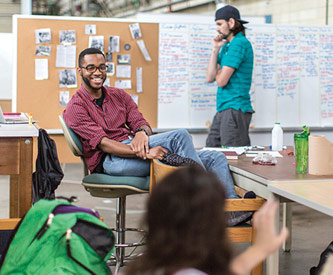 The Engineering Equality team focused on producing a documentary that would explore race relations at Lehigh University in the past 50 years. 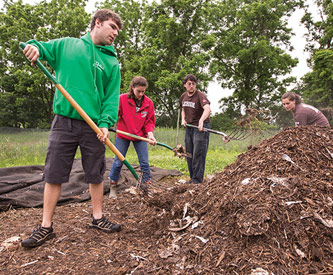 GR2OW aimed to turn Lehigh's food waste into compost that can be used to fertilize greenery on campus. 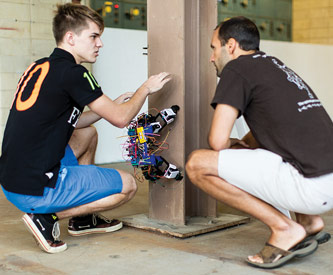 Smart Spaces was also a site for the National Science Foundation's Research Experiences for Undergraduates. 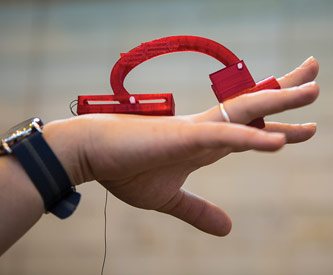 Students 3-D printed prototypes of hand exoskeletons for possible use in pediatric rehabilitation.