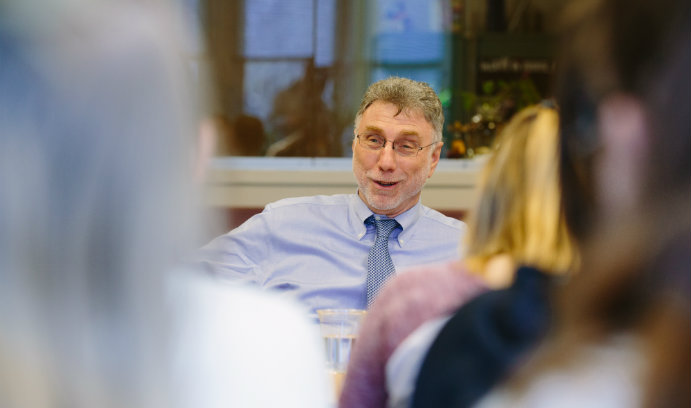 On his first day on the job as executive editor of The Boston Globe, Marty Baron ’76, ’76G, ’14H initiated an investigation which would reveal a systematic coverup of child sexual abuse by scores of Roman Catholic priests in the Boston area.

The Globe’s reporting in 2002 won a Pulitzer Prize for public service and emboldened journalists around the nation and abroad to investigate clergy sex abuse allegations and cover-ups by the church hierarchy. The story of that Globe investigation is told in the movie Spotlight, which won two Academy Awards on Feb. 28—Best Picture and Best Original Screenplay.

On Thursday (Feb. 18), Baron, who graduated from Lehigh with a bachelor’s in journalism and an MBA, spoke to a packed audience at Zoellner Arts Center following a special screening of Spotlight. The crowd gave him a standing ovation when he walked on the stage.

Now executive editor of The Washington Post, Baron said he hopes the film impresses on millions of moviegoers the important role of the press in society.

“I hope it is sending a message to owners, publishers, editors that they should rededicate themselves to investigative reporting,” Baron said. “And I hope it causes everybody, people in the press and the public generally, to listen to people who have fallen into the margins of society or been pushed into the margins of society … they have something important to say.”

The film depicts the painstaking, unglamorous work of investigative journalism, with reporters poring over documents, tracking down sources and getting doors slammed in their faces.

Baron took questions from Jack Lule, professor and chairman of the Lehigh department of journalism and communications, and audience members, including several former Brown and White staffers who worked with Baron at Lehigh.

Baron said The Globe investigation started as a local story about one priest, John J. Geoghan, who was accused of abusing dozens of children and transferred from parish to parish by the Archdiocese led by Cardinal Bernard Law, who was aware of the sex abuse allegations.

When the first story was published, the Spotlight staff, which was The Globe’s investigative team, prepared for an onslaught of angry calls and protests from Catholics defending the church.

Instead, what the reporters received was a flood of calls from more victims of abuse who wanted to tell their stories. Over the next 1 ½ years, The Globe published about 900 stories.

“Over time there was fury among parishioners and fury among many priests who felt betrayed by the hierarchy, because there are many good priests as well,” Baron said. “Eventually, some 80 priests signed a letter calling for Cardinal Law’s resignation.”

Law did resign and was sent to a position at the Vatican. The church has taken steps to institute reforms, albeit imperfectly, Baron said.

“I can’t tell you how many times people told me—Catholics, devout Catholics—told me they were so grateful for what we did because it caused the church to be cleaned up,” he said.

One of the more poignant moments in the evening question-and-answer segment came when an audience member spoke of being abused by a priest in 1947 when he was 12. The man said for years he told no one.

“I didn’t know if anyone would believe me,” he said. “There’s not a day goes by that I don’t have to live with this.”

He has since told his children, who have been supportive. He thanked Baron for his efforts.

A Spotlight on Baron

In the movie, Baron is played by actor Liev Schreiber, and Lule asked what he thought of Schreiber’s portrayal of him.

“To watch the movie you have to believe that I have absolutely no sense of humor,” Baron said, drawing laughter from the crowd. “Many of my closest friends said, ‘They don’t capture your sense of humor and your warmth’—it’s a small minority of people.”

But he added that The Globe investigation was a lonely time for him because he was an outsider in a city where he knew no one.

Lule asked if that outsider status is necessary for journalists to do the work they need to do.

Journalists don’t have to be outsiders and should get to know their communities well but need to be independent, Baron said.

“We have an absolute obligation to tell the truth as best as we can determine it,” he said. “And that’s more important than our ties to the community.”

Asked about whether The Globe’s stories were fair, considering that the Church has done a lot of good, Baron said, “I don’t think we should not disclose wrongdoing because people did other good things.”

Law had done positive things “but he did something really terrible here,” he said. “His job, he should have been looking out to protect children, and … instead of protecting those children, what he sought to do was protect the reputation of the church and to avoid scandal.”

Baron said he learned a lot as a Lehigh student and as editor of The Brown and White newspaper. He praised former journalism professors Joseph B. McFadden and Robert Sullivan, who he said, “had a strong sense of right and wrong and how to go about our work.”

His job as Brown and White editor required him to face the difficult questions he still faces today about what and what not to publish and when it’s necessary to intrude on someone’s privacy or affect their reputations.

“There’s a lot of talk these days about the responsibility of the press,” Baron said. “I believe that the single most irresponsible thing we can do would be to stop holding powerful interests accountable.”

Today, there are lots of different news sources but people “live in parallel information universes,” he said. “They tend to be drawn to sources of information that reaffirm their existing point of view.”
That’s true for people on the right and the left, he said.

“You know there’s an extraordinary number of people in this country that believe that Obama wasn’t born in the United States, all right, even though all the information shows that he was and there is no evidence that shows that he wasn’t,” Baron said.

“There is a substantial portion of people in this country who believe that Jews didn’t show up for work on 9/11 at the World Trade Center because they somehow knew it was going to be attacked.”

A conversation with students

Earlier in the day, Baron spent an hour answering questions from about 30 Lehigh journalism students and staffers for The Brown and White.

During his stint as Brown and White editor, the paper would cover sensitive subjects such as race and ethnicity and people would get upset at the staff for such stories, just like in professional journalism.

“I found it to be a really good preparation for being a professional journalist,” he said.

He recalled how shortly before initiating The Globe investigation into clergy sex abuse he’d read a column by a Globe columnist who wrote that a lawyer was accusing Cardinal Law of knowing about Geoghan’s history of abuse when the priest was reassigned to another parish. The column said that the truth might never be known because court documents about the case had been sealed.

“In my view when somebody says ‘the truth may never be known,’ that should be like chum to journalists,” Baron said.

A student asked what advice he would give to people entering journalism today.

“The first thing I would say is that I think it’s not a bad time to get into journalism, contrary to popular perception,” Baron said. There’s a lot of innovation and experimentation going on in the news industry with digital media news websites sprouting up in areas as diverse as politics and music.

“Think in terms of all the opportunities that are out there, not just the brand names,” he said. He advised students to learn all the tools of the trade, including how to shoot videos and do audio reporting.

They need to be curious, critical thinkers and learn the basics of good reporting but also be entrepreneurial.

“We don’t know where the field is going so we have to accept there’s going to be change and we’ll be contributors to the change rather than just be victims of the change,” Baron said. “We used to hire people we thought could learn from us. And now we hire people we think can teach us things we don’t know.”

View a video of the question-and-answer segment with Marty Barton.

Watch a video of the question-and-answer segement with Marty Baron, right, and Jack Lule, professor and chairman of the Lehigh department of journalism and communications. 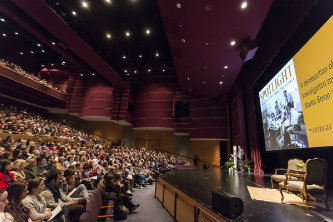 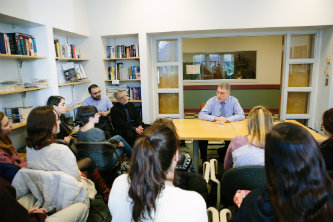 Baron spent an hour answering questions from about 30 Lehigh journalism students and staffers for The Brown and White. Photo by Christa Neu.

In the film, Lehigh alum Marty Baron ’76, ’76G, ’14H, who launched the probe as then-editor of The Globe, is portrayed by actor Liev Schreiber, who has called Baron “a real hero” for pressing The Globe to investigate the Church’s cover-up.

Baron is currently executive editor of The Washington Post. He recently wrote about the film and the Oscars event.

Here is The Washington Post's coverage of the Oscars.