On Feb. 21, 1965, Malcolm X was gunned down by members of the Nation of Islam, under what remain highly contested circumstances, at a rally in New York City. Now, as the 50th anniversary of his assassination nears, Lehigh’s Africana Studies program and political science department are planning a three-day conference to commemorate the slain African-American leader’s life and legacy.

The conference, “Malcolm X’s World 50 Years Later: Race, Religion and Revolution in the 21st Century,” will bring together scholars from around the world for a dialogue on issues that Malcolm X was committed to, including equality and social justice, all of which are timely and still relevant today.

“This conference is situated within the context of the various commemorations over the last several years about important milestones in black history—the Voting Rights Act, the Civil Rights Act, the 50th anniversary of the March on Washington,” says James Braxton Peterson, associate professor of English and Director of Africana Studies. And Malcolm X, he says, must be among the prominent figures of the civil rights era to be commemorated in American history.

The conference will be held Feb. 17 -19 at various campus locations. Talks by keynote speakers will be live streamed, and people can join the conversation at #casdialogue.

Saladin Ambar, associate professor of political science and author of Malcolm X at Oxford Union: Politics in a Global Era, says, “The idea of scholars coming, not only from the states but from around the world, is to suggest that [Malcolm X] is worthy of study, he’s worthy of research, he’s worthy of being thought of in the context of the most elite academic institutions devoting time and attention to thinking about who he was.”

Malcolm X was 39 when he was killed.

“We lost one of the most gifted political thinkers, one of the most charismatic and compelling public speakers in the history of America,” says Peterson, reflecting on Malcolm X's death. “We lost a tremendous amount of momentum in the movement for equality and social justice, and most importantly…we lost what was probably our best opportunity to have a more holistic and respectful engagement with Islam.” 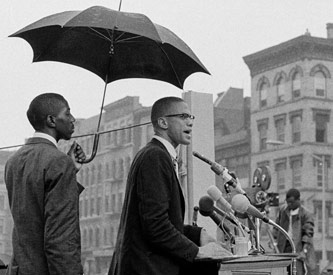 "Malcolm X's World 50 years Later: Race, Religion and Revolution in the 21st Century" will bring together scholars from around the world. Photo: Bob Adelman/Corbis