Lorenzo Servitje: A War (of Words) on Disease 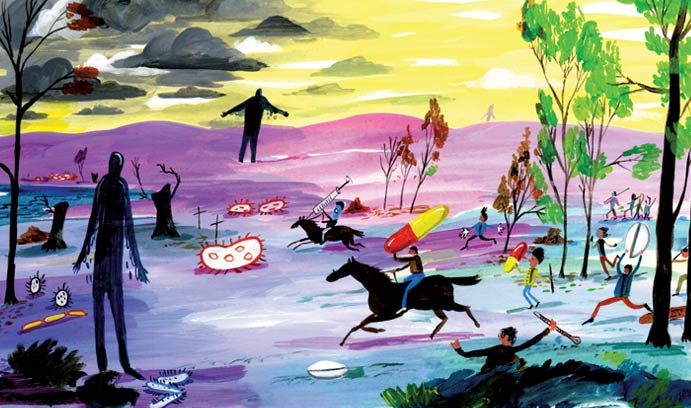 Humans fight colds and cancer, destroy bacteria and wage war on influenza—always, it seems, prepared for battle. These expressions serve as more than a reference to the body’s defense against disease: They are deeply rooted in the metaphorical militarization of medicine that began in the 19th century, and in Victorian novels in particular.

Lorenzo Servitje, assistant professor of literature and medicine, explores how this metaphor evolved to become today’s most common—and at times problematic—way to discuss disease in his current book project, “Medicine Is War: The Martial Metaphor in Victorian Literature and Culture.”

Servitje initially studied biology as an undergraduate, with the intention of attending medical school, but he always enjoyed taking literature classes as well. In one such class, while reading Edmund Spencer’s 16th-century epic poem “The Faerie Queene,” he found himself writing about it, he says, using biological or medical language.

“I was understanding literature in biological or medical terms,” Servitje explains. His interest in, and knowledge of, both literature and science led him to pursue a Ph.D. in English at the University of California Riverside, focusing on Victorian medical discourse.

“I was really interested in the medical science but more about how we understand those things, or how those things come to be known,” he explains. “In addition to Victorian medicine, I came to develop a lot of interest in contemporary understandings and representations of science.”

“Military surgeons [were] dealing with cholera epidemics, typhus, and other contagious disease, in an effort to keep soldiers fit for battle,” he explains. “And so, there emerged a metonymic connection … We have soldiers and they’re fighting, but we’re fighting two enemies: disease and opposing soldiers on the battlefield. That was a logic conducive to thinking of medicine as war. So when stories about that began circulating in the public and within medical journals, a lot of literary authors that were writing about medicine, I suggest, were reflecting on those relationships and then starting to use medicine as war as a way to talk about medicine and kind of transmute that idea into the public.”

Servitje follows the literary treatment of disease in what he calls “an arc that goes from Romantic literature all the way to modernist,” exploring works by Mary Shelley, Charles Kingsley, Bram Stoker, Arthur Conan Doyle and Joseph Conrad.

Shelley’s The Last Man, for example, depicts an apocalyptic plague—a response, Servitje suggests, to the 1817 cholera pandemic that affected people most everywhere but England. “Even medics within England recognized that it was in fact caused by soldiers moving places, but it was important for national identity: ‘This is an Asiatic disease, this is tropical, this is not English,’” he says. England would later feel the effects of several cholera pandemics of its own. By the end of the 19th century, Stoker’s Dracula provides a narrative of reverse colonization “where the East or the colonies are striking back and in the form of a disease that’s capitalizing and parasitizing the reproductive futurity of the British race, which was the white middle-class female body,” he explains. In contrast to a gothic novel like Dracula that reinforced thinking of medicine as war by inculcating anxieties of the foreign and the pathological, Conrad’s Heart of Darkness “deconstructs this way of producing English—or, more broadly, European—health at the expense of colonial health.”

Because the metaphor of medicine as war comes from actual military practice, says Servitje, it has violent origins—and that has consequences.

“The way we naturalize biology and medicine as defense within the body, immunologically and medically, it’s translated and scaled up to the level of politics and nation. That has real implications … The way [the metaphor is] used to be able to define things like quarantine or dangerous threats, particularly with foreigners or racialized others … allows for national and racial difference to be justified under medical terms.”

This, he says, can be observed in the 19th-century theory of social degeneration, wherein individuals feared the decline of civilization due to biological change, and today in heated immigration debates around the world.

When the metaphor is translated to body as nation, he says, “the idea of border protection and protection from penetration from foreigners or diseased bodies [and the] need to exclude or quarantine certain people is justified because it’s naturalized by thinking the body works the same way.”

The randomness of sickness and the lack of control humans wield over it can lead one to believe that “this disease is out to get me,” Servitje says. “I’m fighting these things. But really, it’s kind of stochastic … It’s hard to make sense of that on an individual scale, especially in the wake of terminal illness.”

Thinking about disease as an enemy helps make meaning of something that is often difficult to understand and impossible to explain, even given our own day of modern medical advancements, he says.

However, the metaphor has implications, says Servitje, for doctor/patient communication, for bioethics, and for how the public understands disease.

“It’s almost the only accessible language to talk about disease,” he says. “It’s really hard to think about it in other terms. And not that it’s wrong, and I certainly don’t want to suggest that somebody who has terminal illness or any kind of sickness should not use that [language]. When you think about it, fighting certainly gives you a sense of purpose, and it’s empowering, though a lot of people have argued that it ultimately suggests that we all lose, so it has a negative outcome.”

Servitje suggests that alternative—but equally accessible—discourses might help patients, practitioners and policy makers think about illness in other ways.

“By only having [the war metaphor], especially with doctors having this as the only way to describe it or it just being in the public imaginary, it’s very delimiting,” he explains. “It doesn’t allow for other options. Palliative care doesn’t make sense under the logic of medicine and war, does it? I mean, it’s surrender.”

In addition, the martial metaphor contributed to iatrogenesis—unintentional complications stemming from medical treatment—not only in terms of drug side effects, but a much larger problem that threatens populations globally. The overuse of antibiotics, fueled by the societal desire to eradicate sickness and the metaphorical logic of war, has led to antibiotic resistance, presenting an entirely new set of problems. Fittingly, the destruction of good bacteria along with bad bacteria through this practice—a kind of scorched-earth approach to medical microbiology”—has given rise to another metaphorical military term: collateral damage.

Perhaps, says Servitje, society might consider the notion of living with disease rather than against it, given the consequences of a perceived fight.

“Diseases aren’t enemies. They don’t have intentions ... And it’s fallacious to think they’re out to get us. That is not to say we shouldn’t think or talk about them in this way, but we should be aware of what it means when we do.”