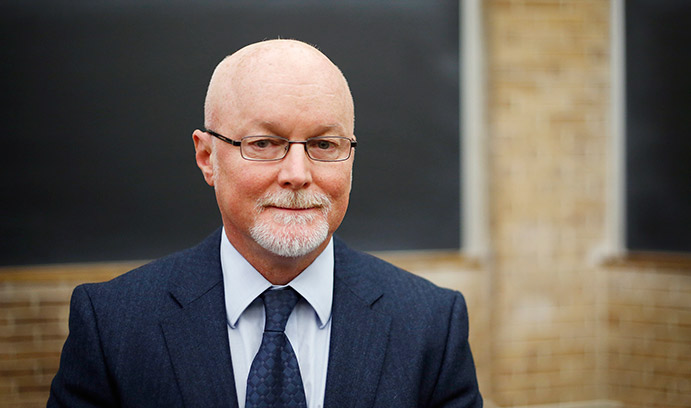 “There is no room,” says Donald Hall, Herbert J. and Ann L. Siegel Dean of the College of Arts and Sciences, “for totally overwriting someone else’s world view.”

The exchange occurred six years ago at the International Humanities Conference in Tunisia but it remains fresh in Donald Hall’s memory.

An American film scholar, Hall recalls, couldn’t comprehend why her Kuwaiti colleague believed in wearing a veil. She refused to accept the Arab academic’s explanations that shrouding her face was a sign of “cultural sensitivity” in a mostly Muslim country and a useful mask of “anonymity.” According to the Western feminist, the Middle Easterner was not only a willing victim of oppression, she was “wrong.”

Six years later, Hall, an English professor, remains disturbed by the American teacher’s holier-than-thou attitude. He preaches what he believes is a path forward—toward tolerance, understanding, cooperation—as the Herbert J. and Ann L. Siegel Dean of Lehigh’s College of Arts and Sciences, where for three years he’s been trying to turn dueling monologues into dialogues.

Hall has built his campaign on the platforms of internationalization, diversity and interdisciplinary harmony. During his tenure the College has sponsored a conference on the Syrian civil war, fed to over 30 countries via podcasts and Twitter, and provided seed funding for the Sustainable Development Program, enabling students to help poor villagers from Costa Rica to Senegal.

Hall’s mission will be boosted by Lehigh’s 2015 conference on Malcolm X, one of the 20th century’s most galvanizing, polarizing leaders in race, religion and politics. The Feb. 17-19 event will be supervised by James B. Peterson, director of Africana Studies and associate professor of English, and Saladin Ambar, assistant professor of political science and author of a new book on Malcolm X’s 1964 debate at the Oxford Union Society, which Ambar calls “a lost jewel” of the civil-rights movement in America, Africa and Europe.

The conference comes three years after Lehigh hosted a speech by Ilyasah Shabazz, Malcolm X’s daughter, during a celebration of the life of Rev. Martin Luther King Jr., her father’s rival. Setting the table for ideological balance is part of Hall’s crusade to dismantle silos that are intellectual, cultural and personal.

Hall could write a book about being overwritten. He grew up in a small, predominantly white Alabama city simmering with anger over civil rights and the Civil War. While teaching English as a Peace Corps volunteer in Rwanda, he paid close attention to violent conflicts between Belgians and Africans and between African tribes. As a gay man he’s been dismissed as “diseased, perverted, damned.” He’s turned the other cheek by advocating same-sex rights and by creating academic programs in gay and lesbian studies.

Hall lobbies for forging new alliances in his keynote address “Looking Beyond Our Horizons,” which he delivered this year in Japan and England at cultural-studies conferences presented by the International Academic Forum. His essay is a guide to “crossing boundaries comfortably and enthusiastically” with people from radically different countries, communities and academic departments, a group commonly called “The Other.”

Hall’s advice is very Zen. Identify your weaknesses. Recognize The Other’s strengths. Listen before you argue; listening can be humbling and rewarding. Embrace the company of strangers (“the less like ourselves, the better”) and the concept of strangeness (“know what we don’t know”). Most of all, avoid voids. Demolishing The Other’s perspective, insists Hall, is “a dead and deadening narcissism.”

For Hall, robust dialogue is beneficial on and off campus. Employers, he points out, are more willing to hire liberal-arts majors who have wide exposure to the sciences as well as the arts, social-science majors who have a love of languages and quantitative methods, humanities majors who are more than humane and also well-skilled. Employees who use more unused tools are more likely to succeed and help others succeed. Steve Jobs, Apple’s impresario/imagineer, claimed that his early computer innovations were inspired by a class in calligraphy.

The ultimate goal, insists Hall, is entering “the cacophonous fray with curiosity, enthusiasm and, especially, humility.” The penultimate goal is “peace, good will and a sense of shared interest with our fellow inhabitants of the planet.”

Hall’s global connections drive him to make Lehigh more globally connected. During his deanship the College’s $20,000 New Directions Fellowship has funded everything from a study of Turkish writers in Germany to a tour of America and Europe by a new bi-continental jazz band. The Humanities Center has presented programs on everything from the ’70s gay-liberation movement to protecting the U.S.-Mexican border. More prominent speakers have addressed more pressing issues in the Kenner Lecture on Cultural Understanding and Tolerance. Last year Madeleine Albright, the former U.S. Secretary of State, stressed the political importance of acknowledging an enemy’s spirituality. This year Michele Norris, a special correspondent for National Public Radio, discussed her Race Card Project, where participants summarize racial identity in six words.

From living in Chelsea, Ala., where a Ku Klux Klan chapter burned a huge cross on a baseball field across the street from his house, to authorizing a conference on Malcolm X, once the KKK’s Public Enemy No. 1, Hall has come to devote his life to the cause of greater tolerance and understanding.

“Isn’t it interesting?” he says of his life path. “My Civil War ancestors are probably spinning in their graves.”

Video and photo by Stephanie Veto

Donald Hall says he strives to be an "ambassador for the liberal arts."