The New Orleans native finished his career with 1,327 points-—good for 14th all-time at Lehigh—but his 577 career assists are what set him apart. Since he arrived on campus in 2010, 19 different Mountain Hawks have benefited from his generosity.

For an in-depth look at McKnight’s record, the Bulletin enlisted the help of Ken Pomeroy, a college basketball writer and statistician, who broke down McKnight’s career by the numbers—and revealed who was on the receiving end of the most of his dishes.

McKNIGHT’S FIRST ASSIST led to a three-pointer by classmate Anthony D’Orazio ’14, giving Lehigh a 20-11 lead with 5:52 remaining in the first half of a matchup with the Penn State Nittany Lions at State College on November 12, 2010.

McKNIGHT’S FINAL ASSIST led to a Justin Goldsborough dunk with 4:04 remaining in a Patriot League tournament matchup with Holy Cross in Worcester, Massachusetts. on March 5, 2014.

IN THE 2012 NCAA TOURNAMENT
McKnight’s first assist led to a two-point jumper by CJ McCollum, in Lehigh’s historic upset against Duke. 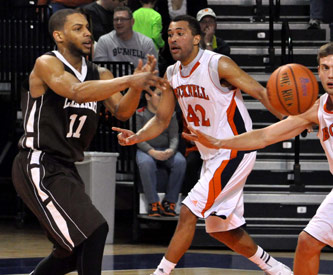