Lehigh Wrestling: A Legacy of Success, and a Special Season in the Works

The Lehigh wrestling program develops true scholar-athletes while also competing at the very highest levels of the sport.

Take a look at the national Top 20 in college wrestling most years, and you'll see many of the names you'd probably expect to see when it comes to big-time college athletics.

And standing right alongside the rest of them, you’ll see the Lehigh Mountain Hawks.

Since the inception of the program all the way back in 1910, the wrestlers of Lehigh have stood toe-to-toe with some of the most powerful athletic departments in the nation. In all, Lehigh wrestlers have won 28 individual national championships and 214 individual league championships, and have earned All-America honors a total of 150 times. With decades of success and a proud legacy dating back more than 100 years, Lehigh enjoys a much-deserved reputation as one of the finest programs in the history of the sport.

A Glimpse Inside a Storied College Wrestling Program

In the weeks leading up to the national championships, Lehigh visual storyteller Stephanie Veto spent hours meeting with the Mountain Hawks, attending their workouts and covering their last two dual meets of the season to learn more about what it takes to compete at the very highest levels of this grueling sport—while at the same time excelling as students at one of the nation’s most selective universities. 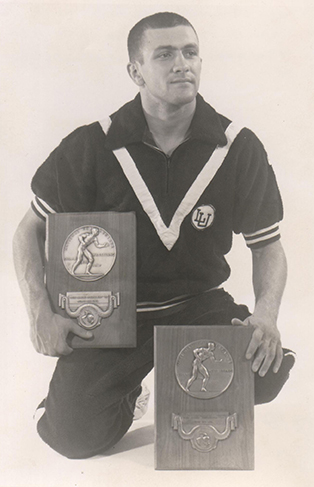 In 2018, that reputation shined as bright as ever before.

In early March, the Mountain Hawks traveled to Hofstra University to compete in the Eastern Intercollegiate Wrestling Association (EIWA) Championships, where they butted heads with their longtime wrestling rivals from Cornell. The Big Red had won 11 straight league crowns entering this year’s tournament, and had their sights set on a 12th. But this year’s Mountain Hawks would have none of it.

After two intense days of grappling, Lehigh saw its wrestlers claim five individual league titles en route to a resounding 164.5-146 team win over Cornell. It marked the first time since 2006 that the Mountain Hawks claimed the crown, and gave the program its 35th EIWA team title.

A couple of weeks later, the team traveled to Cleveland, Ohio, to take part in the 2018 NCAA Wrestling Championships--with all ten of its wrestlers qualifying for the tournament. Only one other program--Ohio State—could say the same, and the achievement marked the first time since 1967 that Lehigh sent a full ten-man contingent to the nation’s top tournament.

By the time the tournament ended, Lehigh saw three wrestlers earn All-America honors--senior Darian Cruz, junior Scott Parker and sophomore Jordan Kutler. The team finished in 15th place overall, and now looks ahead to potentially even greater things next season; nine of ten of its national qualifiers return for the 2018-2019, which means the future looks bright for a program that also boasts a proud past.

12-3
Overall record, including wins over Michigan, Arizona State, and Oklahoma
5
Lehigh wrestlers claimed EIWA titles, their most since 2003
3
Losses this year all came against ranked opponents
26-0
Senior Darian Cruz (125), a reigning national champion, is undefeated this season

Heading to Cleveland for the NCAA Wrestling Championships

Lehigh had ten wrestlers out of ten weight classes earn bids for the NCAA Championships this year. The championships will be hosted in Cleveland, Ohio, and will run from March 15-17. Senior Darian Cruz will be looking to win his second straight national title at 125 pounds.